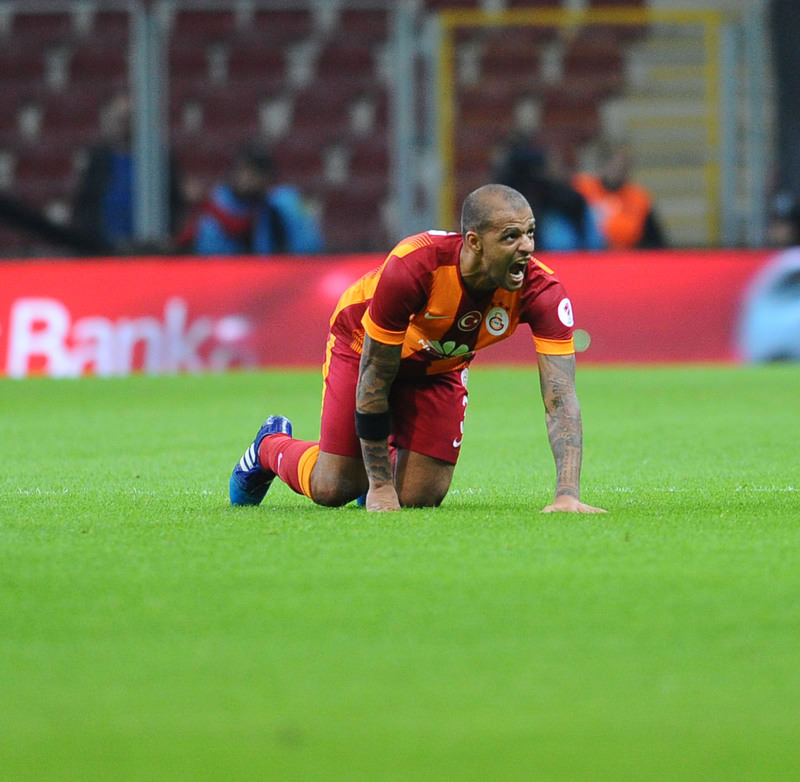 As the transfer window closed Monday night, Felipe Melo, who has been a favorite of Galatasaray fans due to his colorful personality, signed for Inter Milan. De Gea's 40 million euro move to Real Madrid stalled on deadline day because the paperwork was submitted a minute late

European football experienced a transfer deadline day full of surprises and shocks on Monday night. Brazilian defender Felipe Melo, who became a fans favorite at the Turk Telecom Arena, surprisingly agreed to sign for Inter Milan on the last day of the transfer window. The move came as something of a surprise because Melo had agreed with Galatasaray to extend his contract until 2019 recently. He said farewell to Galatasaray fans with a message on his Instagram account: "Galatasaray, I will never forget you and your fans. Four years of passion, victories, mutual love and perfect memories...Galatasaray have won a great fan. This is not a farewell," along with a video clip comprised of his photographs depicting his Galatasaray days with Tracy Chapman's songs in the background. He will be remembered for his aggressive style and eccentric behavior. Famous for his pitbull imitation, Melo had been signed from Juventus in 2011. He won eight cups at Galatasaray and scored 18 goals in 154 matches.

Inter Milan have bolstered their new-look midfield by capturing Brazilian veteran Melo and Bosnian Adem Ljajic from Galatasaray and Roma respectively. Reports in Italy claimed Melo, who played for Brazil in the 2010 World Cup but has not played since as he bore the brunt of the blame for their exit at the hands of the Dutch in the quarter-finals when he was sent off, signed the contract in Turkey and it was then emailed to Inter, who deposited it before the 2200 GMT transfer deadline. No financial details were revealed but reports claim 32-year-old Melo cost Inter 3.5 million euros.

Earlier the club had announced the arrival of out-of-favor Roma forward Ljajic on a season-long loan deal, reportedly for 2 million euros with an option to buy outright set at an additional 9 million euros in 2016.

On the deadline day of the transfer window, Real Madrid and Galatasaray experienced paperwork shocks in the last minute of the day. The transfer window in Spain closed Monday without a deal announced for the expected move of Manchester United goalkeeper David de Gea to Real Madrid, with local media reporting the deal fell through because the paperwork wasn't submitted on time.

Madrid and United had been negotiating a deal that included Costa Rica goalkeeper Keylor Navas moving the other way, but the clubs apparently failed to register the paperwork with the Spanish league offices before midnight local time.

If the deal falls through, De Gea could be forced to return to United despite having been dropped from the team by manager Louis van Gaal as the talks dragged on. Van Gaal has said De Gea had his heart set on a move back to his hometown.

A Spanish Professional League (LFP) spokesperson told AFP that De Gea had not been registered as a Madrid player, as sources close to both clubs reportedly blamed each other for the deal breaking down late on Monday.

Having pinpointed De Gea as a transfer target since the beginning of the transfer window, Madrid may now elect to appeal to the world governing body FIFA to ratify the transfer.

Having a similar problem, Galatasaray also accused Borussia Dortmund of not sending the papers for the transfer of defender Kevin Grosskreutz on time. Galatasaray administrators alleged that Dortmund entered the information about Grosskreutz's transfer into the system late. Meanwhile, Manchester City center back Jason Denayer has joined Turkish club Galatasaray on a season-long loan. The 20-year-old Belgian international spent last season on loan at Celtic, where he made 29 league starts and won the Scottish Premier League Young Player of the Year award. His exit follows the arrival of Argentina international center back Nicolas Otamendi from Valencia for a fee reported to be in the region of 45 million euros. Galatasaray are in the Champions League Group C this season along with Benfica, Atletico Madrid and Astana. West Ham United have signed midfielder Victor Moses from Chelsea on a season-long loan. Barcelona midfielder Alex Song has rejoined West Ham United on a season-long loan.
RELATED TOPICS