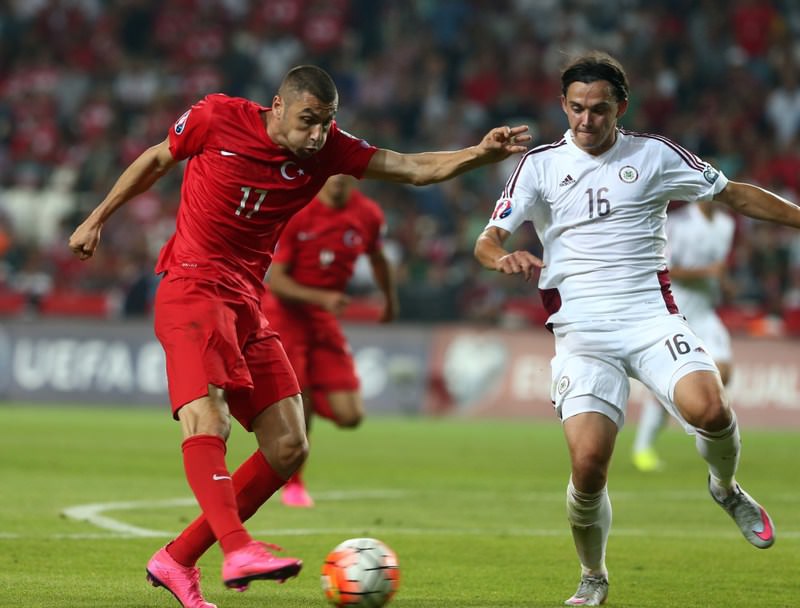 by Hakan Baş Sep 05, 2015 12:00 am
Having missed a big opportunity by drawing with Latvia 1-1, Turkey will take on the Netherlands. The match is the last chance for Turkey to gain a third place spotUEFA Euro 2016 qualifying is entering its final stretch with just three sets of games to go over the next two months. However, Turkey drew with Latvia 1-1 in European Qualifiers 2016 in Group A in Turkey's central province of Konya on Thursday and have missed a big opportunity ahead of the match against the Netherland on Sunday. The group A leaders Iceland took a big step towards sealing their ticket to Euro 2016 with a 1-0 win in the Netherlands on Thursday which put the Dutch in danger of missing the finals in France.

The Netherlands are third in Group A six points behind the Czech Republic who beat Kazakhstan 2-1 thanks to a late Milan Skoda brace on 74 and 86 minutes. So, Sunday's match is crucial to the hopes of both countries. Netherlands have 10 points, one more than Turkey who let slip a chance to go above the Dutch when they conceded a late goal in a 1-1 home draw with Latvia.

Turkey coach Fatih Terim who found himself on the line of fire, made a shock allegation, saying Volkan Demirel, the first goalkeeper pf the national squad did not want to play. In Nov. 16, 2014, Volkan Demirel left the pitch before the match against Kazakhstan had started because of the verbal abusement by some fans in the tribunes. Responding the criticisms why he did not call the goalkeepres Volkan Demirel and Cenk Tosun, Terim said, "Volkan Demirel himself demanded me not to call him for national squad. As for Cenk Tosun, we don't have to select all the players from the Super League. Cenk is already in A2 team. Besides, if I had called him, you would have found some other person to criticize me. It's a habit of yours. Now our goalkeepers are Volkan Babacan and Onur Kıvrak"Criticzing harshly, Stefan Johannesson, the Swedish referee of the match, Fatih Terim said, "Burak Yılmaz's position was not off-side. If the referee had not blown the whistle, he could have scored easily. He also did not award us a penalty. Shame on the referees. Everybody criticizes Turkish referees. But I don't know what UEFA will do with these referees. They are not in top level to supervise such a critical match." "The explanation of the defeat is very simple. If you could not come ahead with at least two goals in these type of matches, you could barely win. If you find the net early there will not be a problem. We missed so many goals and we don't have any excuses. Now, there is no way for us other than to win against the Netherlands."

Meanwhile, Arjen Robben's first match as Netherlands captain was over inside a half hour as he limped off the Amsterdam Arena pitch injured and had to watch from the sideline. Danny Blind's debut as national coach went from bad to worse in the 33rd minute when referee Milorad Mazic showed defender Bruno Martins Indi a direct red card for making a striking movement with his arm as he tumbled to the ground in a tackle with Kolbeinn Sigthhorsson. Blind was highly critical of Martins Indi, calling his foul, "unbelievably unprofessional."

"This is not the scenario you have in mind for your first match as Netherlands coach," the coach added. Gylfi Sigurdsson converted a 51st-minute penalty for ıceland's only goal after Gregory van der Wiel brought down Birkir Bjarnason. Sigurdsson must wish he played only the Netherlands the midfielder scored twice in Iceland's 2-0 home defeat of the Dutch last October.

Iceland are top with 18 ahead of Czech Republic on 16. The top two qualify for next year's finals in France along with the best third-placed team in the nine groups, while the other eight who finish third go into November's playoffs. The Czech Republic travel to Latvia while Iceland will bid to seal their first Euro qualification at home against Kazakhstan.

In Group B, Gareth Bale put Wales within touching distance of Euro 2016 and a first major tournament appearance for 58 years as the Real Madrid's star's late goal clinched a 1-0 win over Cyprus. Wales, who last qualified for a major tournament at the 1958 World Cup, are top of their Group B with 17 points - three points ahead of Belgium who won 3-1 at home against Bosnia-Herzegovina. Israel - third with 12 points after beating tiny Andorra 4-0 - will be looking for a first ever Euro qualification against Wales.

The Azzurri host Bulgaria on Sunday in a match that could secure their ticket to next summer's finals in France.

The nine group winners, the nine group runners-up and the best third-placed side will qualify directly for the final tournament in France. The eight remaining third-placed teams will contest play-offs in November to determine the last four qualifiers for the finals. In the FIFA's world ranking, Turkey are ranked 45th, Latvia 86th.