Eto'o brushes off criticism with goals for Antalyaspor 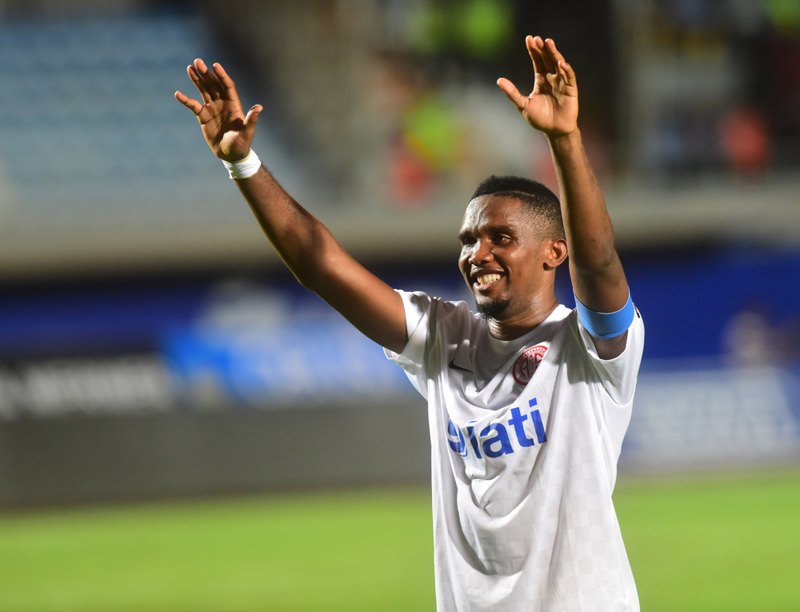 by Daily Sabah Sep 18, 2015 12:00 am
Antalyaspor stunned Turkish football over the summer with their splashy signings, most notably 34-year-old Samuel Eto'o, who is paying back the club with hatfuls of goals. The modest Anatolian club with a small budget paid a lot of money for Samuel Etoo, a world-famous Cameroonian striker, but despite netting regularly, the former Barcelona man has been heavily criticized, with critics even saying that "Etoo is finished," referring to his old age and weight. Some Turkish commentators and sports writers have said, "He is finished" or "He is coming to Turkey for a vacation."

However Eto'o embarrassed them with his performance in the fourth week of the Super Toto Super League. He has scored five goals in four matches and has become the top scorer in the league. The TL 4.5 million ($1.4 million) Antalyaspor paid for the striker has been richly rewarded with his goals and assists, not to mention the attention he has brought to the otherwise unheralded team. Antalyaspor have won three games and have nine points. The 34-year-old Eto'o was a starter in all four matches. Moreover Eto'o has attracted attention with his leadership and has become the captain of his new team. His annual cost for Antalyaspor is 3.5 million euros. But he has already earned his club TL 4.5 million, a third of that, because every club is awarded TL 1.3 million for each win and TL 650,000 for each draw in the Super League. Also, Antalyaspor have been able to raise their income with sponsorship deals, Passolig cards and merchandise thanks to the transfer of Eto'o.

Antalyaspor coach Yusuf Şimşek said, "He is a responsible footballer and of great help for his fellow team-mates on the pitch." Antalyaspor fans have already taken the striker to their hearts. Eto'o has adopted Turkish slang words in a period of short time and addresses his teammates as "Baba" (Old Man) and his coach "Hoca" (Master). He has also won admirers for his commitment to the fans, putting in significant times signing autographs. Eto'o setting foot in Turkey was the subject if a classic joke for a decade. The joke is: "Etoo is done." It means that Eto'o's transfer is done. Some years ago, Turkish TV commentator Oktay Derelioğlu said self-assuredly: "Eto'o ('s transfer) is done" And he repeated it several times. The transfer rumor, which was based on Derelioğlu's source, was not right and the Cameroonian did not come to Turkey. After that, "Etoo is done" turned into a joke. It went viral and comical videos were made on YouTube. But Antalyaspor managed to turn the joke into reality by bringing in Eto'o in June. Cameroon legend signed a contract with Sampdoria in January that ties him until June 2018. Eto'o has been well-travelled in recent years. Since leaving Inter for Anzhi in 2011 he has played at Chelsea, Everton and Sampdoria.
RELATED TOPICS