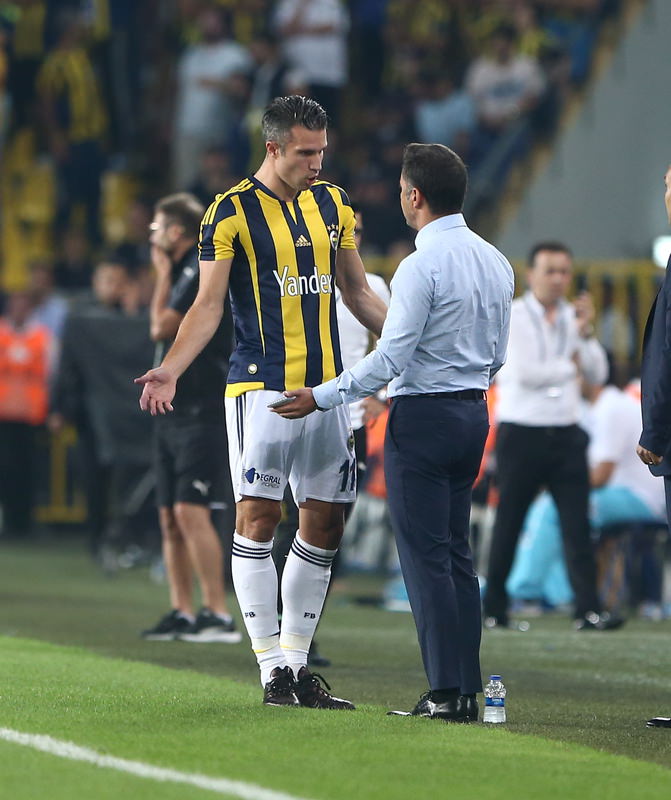 Although the ‘Flying Dutcman' got Fenerbahçe off the hook with his goal against Bursaspor, he was unhappy about warming the bench until the 77th minute. But the Fenerbahçe coach responded saying ‘we make the decisions whether the players like it or not.'

After the embarrassing defeat against Norwegian side Molde in the UEFA Europa League group match last Thursday, Fenerbahçe narrowly defeated Bursaspor at home on Sunday with substitute Robin van Persie netting the winner after coming off the bench The home side were on edge while they were taking on Bursaspor, who have endured a miserable start to the season with only one win ahead of the match in Istanbul on Sunday. However, the Yellow Canaries were let off the hook by their Dutch star van Persie in the 79th minute and defeated Bursaspor 2-1. Fener fans were left silent when Bursaspor responded to Luis Nani's 43rd minute goal with Tomas Necid's goal in the 63rd minute. Fenerbahçe coach Vitor Pereira brought on van Persie in the 77th minute, with the striker being booed by Fener fans due to his poor performance against Molde. As soon as he touched the ball, the Dutch star found the net and helped Yellow Canaries fans across the country breathe a sigh of relief. Raising their points total to 13 in the fifth week, Fenerbahçe maintained their lead at the top of the Spor Toto Super League with four wins and one draw. Bursaspor, who have lost four of their five games in the league, have collected only three points.

Despite the win, van Persie did not take being benched by coach Vitor Pereira quietly. The Fenerbahçe coach started the match with a team that included four players who did not take part in the match against Molde. Due to their poor performances, Fabiano Ribeiro, Robin van Persie, Volkan Şen and Caner Erkin were benched.

After the match van Persie said, "To be honest, I'm not happy to warm the bench. I can comfortably play the whole 90 minutes. I'm physically very well. I can respond to being benched by scoring and bringing my team victory. So that's what I did."

But Pereira did not hang around to respond to his rebellious star, saying, "If I could bring 23, 24, 25 players onto the field at once, things would be much easier. But football is played with 11 players each. And it is my duty to make the best decisions I can make on this squad. We make the decisions whether the players like it or not. I was very content with van Persie's performance after he took to the field. Not only for his goal but also the help he provided to his team-mates. He was of help both in defense and up front. No players want to warm the bench. It is very natural to be unhappy about being benched."

Meanwhile, Nani continued his scoring streak, this time netting against Bursaspor. He scored against Antalyaspor in the third week in the last minute, giving the team a valuable win. After that he was the best player in the Molde disaster by scoring the only goal for Fenerbahçe. And he made his point against Bursaspor too, raising his goal tally to four. Adding his assist in the match against Rizespor, he has contributed to Fenerbahçe's last five goals.

Fenerbahçe's Portuguese star Raul Meireles said, "This win was very important for us. Every match is important but we especially want to win against Beşiktaş next week. We were aware of the importance of the match against Bursaspor. We gave everything we had in this match. "The performance of the team was very good. Maybe we were tired in the second half but that's natural.

"All of us are professionals and we have to improve ourselves with every passing day. We took lessons from the past and achieved a good result."

The other star of the match, Fenerbahçe's Hasan Ali Kaldırım, said, "We didn't play well. We have to crush our rivals at our home in Kadıköy. We will play a derby match against Beşiktaş next week. So we had to win this match, absolutely. But we did not play well enough. We played a match in the Europa League on Thursday. We were a little tired. Our coach told me that he liked my football mentality. I got a chance to be a starter and took the opportunity."
RELATED TOPICS