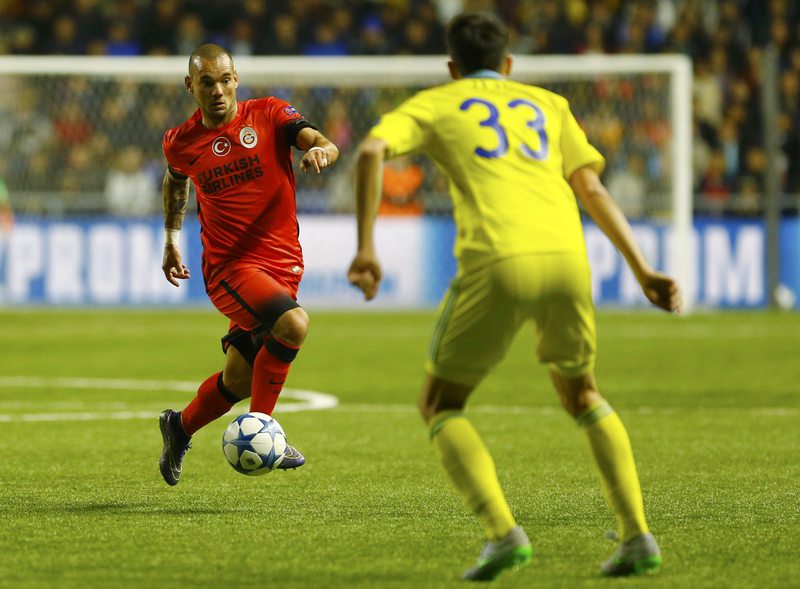 Galatasaray's Wesley Sneijder (L) controls the ball next to Astana's Branko Ilic during their Champions League group C soccer match, September 30, 2015. (REUTERS Photo)
by Anadolu Agency Sep 30, 2015 12:00 am
Turkish heavyweights Galatasaray tied 2-2 with Astana the Kazakhstan champions, who made their home debut at this stage of the UEFA Champions League and managed to get their first-ever group point in Wednesday's match at Astana Area .

Galatasaray couldn't reach the much-anticipated victory against Astana in the Group C match and had to settle for one point.

Galatasaray's Turkish midfielder Bilal Kisa -- scoring the leading goal for his team in 31' -- found the net on his Champions League debut: 1-0.

However, visitors Galatasaray's defender Hakan Balta scored an own goal in 77' equalizing for the home team.

Near the end of the game home team Astana snatched the draw as Galatasaray's French left-back Lionel Carole put the ball in his own net.

Lions lost to Spanish heavyweights Atletico Madrid 2-0 in their home ground, Turk Telekom Arena, in the matchday one.

In Wednesday's game, the Istanbul giants wore their newly released "red" alternate kit for the first time this season.