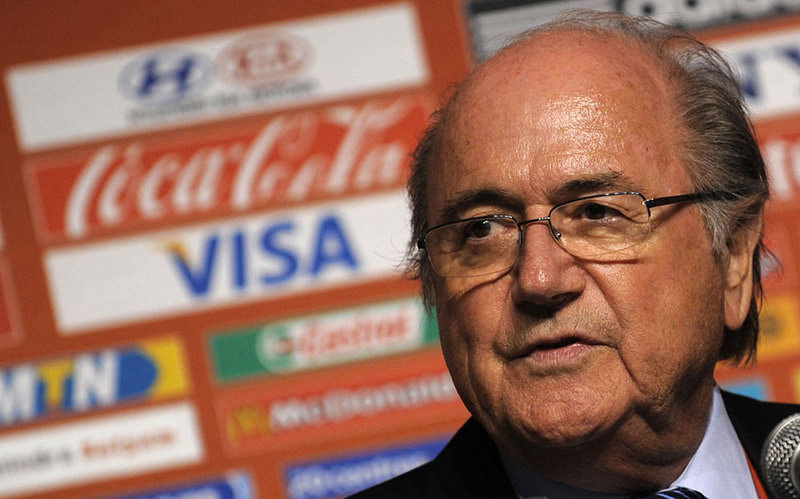 by German Press Agency - DPA
Oct 03, 2015 12:00 am
Major sponsors have increased the pressure on FIFA president Joseph "Sepp" Blatter to resign immediately amid a Swiss criminal investigation against him. FIFA's U.S. based sponsors Coca-Cola, Visa, Budweiser and McDonald's called late Friday for Blatter to go immediately.

But Blatter's US lawyer Richard Cullen said the head of football's world governing body would not be resigning. "While Coca-Cola is a valued sponsor of FIFA, Mr. Blatter respectfully disagrees with its position and believes firmly that his leaving office now would not be in the best interest of FIFA nor would it advance the process of reform and therefore, he will not resign," Cullen said.

Blatter, 79, is due to step down at a FIFA extraordinary congress on February 26, when a successor will be chosen.

Coca-Cola and Visa are two of FIFA's five top-tier partners alongside Adidas, Hyundai/Kia Motors and Gazprom, while Budweiser and McDonald's are World Cup sponsors.

FIFA's long-term partner Adidas, however, urged reforms but did not join the calls for Blatter's resignation. Oliver Brueggen, a spokesman for the German sportswear company, told dpa: "As has been stressed several times in the past fundamental changes are needed at FIFA. This is why the reform process which has been introduced has to be continued transparently and swiftly."

Adidas, which has supplied the official match ball for all World Cup matches since 1970, extended its contract with FIFA two years ago to 2030.
Hyundai/Kia Motors and Russian energy giant Gazprom, which this year became a FIFA partner with a contract to 2018 including the World Cup that year in Russia, have also not joined the calls for Blatter to quit.

Marketing rights are the second biggest source of income after TV rights for FIFA, who lost a number of key sponsors last year including Sony and the Emirates airline as top-tier partners.

Coca-Cola was the first sponsor to advise Blatter to quit immediately, saying: "For the benefit of the game, the Coca-Cola Company is calling for FIFA president Joseph Blatter to step down immediately so that a credible and sustainable reform process can begin in earnest. "Every day that passes, the image and reputation of FIFA continues to tarnish. FIFA needs comprehensive and urgent reform, and that can only be accomplished through a truly independent approach."

Visa said "no meaningful reform can be made under FIFA's existing leadership. And given the events of last week, it's clear it would be in the best interests of FIFA and the sport for Sepp Blatter to step down immediately." The credit card company said "an independent, third-party commission led by one or more impartial leaders is critical to formulate reforms."

In reaction to the sponsors' statement, England Football Association chairman Greg Dyke said Blatter should now stand down immediately. "I think this is a game-changer. It doesn't matter what Mr. Blatter says now - if the people who pay for FIFA want a change they will get a change," he told the Press Association. "What is important is that it isn't just about Mr. Blatter standing down - it's about making sure there is a comprehensive and effective reform program. So for those of us who want fundamental change this is good news."

German Justice Minister Heiko Maas also called for Blatter to quit immediately, saying in a Twitter post that "every day Blatter is still president of FIFA is a bad day for football."

Blatter is being investigated by the Swiss attorney general's office in connection with the award of a TV rights contract with the Caribbean Football Union in 2005 and a payment of 2 million Swiss francs (2.06 million dollars) to UEFA boss Michel Platini in 2011 for work done for FIFA between 1999 and 2002. Both Blatter and Platini have denied any wrongdoing.

Blatter was elected for a fifth term as FIFA president at the end of May but offered to give up his mandate just days later as the organization was hit by a series of accusations.

A separate Swiss investigation is also looking into the bidding process which saw the 2018 and 2022 World Cups awarded to Russia and Qatar respectively.