Turkey coach Terim: We will win 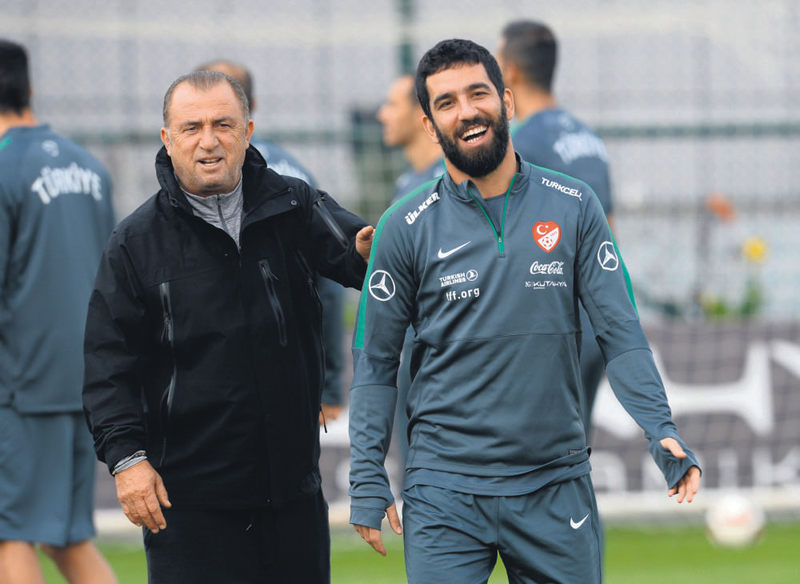 Turkey will host Iceland on Tuesday in a match that will determine the team's destiny gun for a place at the Euro 2016 finals. Turkey only need a point to secure a playoff spot for Euro 2016. Terim said, ‘I believe Turkey will be the winner.'

Tuesday night sees Turkey take on Iceland. Turkey has the chance to secure a spot in the Euro 2016 playoffs after overcoming a poor start to the campaign. In the last group match for the qualifying round of Euro 2016, Turkey will host Iceland, who has already guaranteed a ticket for France, at the Torku Konya Arena Stadium in Konya. Ranked third with 15 points, Turkey is in control of its own playoff destiny, while the fourth-ranked Netherlands must beat the Czechs in Amsterdam to keep their slender hopes alive. Last year, Iceland started their bid to reach Euro 2016 in superb fashion with a 3-0 Group A win over a 10-man Turkey in Reykjavik. Ahead of the critical match, Turkey coach Fatih Terim was sure of himself saying, "The winner will be Turkey."

Terim continued, "Our journey for Euro 2016 started with the defeat against Iceland. In this process we experienced both happy and sad days. But we always managed to stay in the competition. We, as the Turkish national team, showed our character and have never given up. We not only won matches but also found new stars. As a result, we are playing our last match as a team that has a good chance of going to the Euro 2016 finals." "We will fight for victory against Iceland. I believe the team that will leave the field with their heads held high will be Turkey. Nobody must ever doubt that our footballers will represent our country in the right way." Turkey has only beaten Iceland once in eight matches going into today's game. It will be Turkey's ninth game against Iceland. The national team has played seven official matches and one special match against their Nordic rivals. They have lost five times and drawn twice. Five of these matches took place in Iceland while three of them were held in Turkey. Iceland has scored 16 goals, while Turkey has scored just nine. On Sept. 9 of last year, Turkey lost to Iceland 3-0 in their first match of the Euro 2016 Qualification Group A in Reykjavik.

On Sept. 24, 1980, Iceland and Turkey played against each other for the first time in İzmir as part of the 1982 World Cup Qualifiers. Iceland defeated Turkey 3-1. Turkey's goal came from Turkey's present national coach, Fatih Terim. The national team also lost to Iceland 2-0 in the following play-off. In 1988, Turkey drew 1-1 with Iceland in the World Cup 1990 Qualifiers and lost the play-off 2-1. In a special match in 1991, Turkey again lost to Iceland 5-1.

Turkey and Iceland were paired in the 1996 European Championship Qualifiers in 1994. Turkey won the game 5-0, yet drew 0-0 in the play-off. Iceland's national team is managed by Swedish coach Lars Lagerback and Icelander Heimir Hallgrimson. Iceland qualified for the finals of the European Championships for the first time this year, after 12 unsuccessful qualification campaigns.

Iceland lost the chance to go to the 2014 World Cup Finals after its defeat in a play-off. In the Euro 2016 Qualifiers, Iceland has won 20 points in nine matches and leads Group A. Iceland surpassed the Czech Republic as well as Turkey and the Netherlands, paving the way for the finals. In the October FIFA World Rankings, Turkey ranks 37th and Iceland is 23rd.

Meanwhile, the Netherlands, who were within a penalty shootout victory of reaching the 2014 World Cup final, now stand on the brink of missing the European Championships for the first time since 1984. Winners of their only major tournament in 1988, when Marco van Basten and Ruud Gullit inspired them to continental victory over Russia in Germany, their fall from grace has been one of football's greatest mysteries as they now stare Euro 2016 elimination squarely in the face.

Euro semi-finalists in 2000 and 2004, quarter-finalists in 2008, they were only beaten by an Andres Iniesta's extra-time goal in the 2010 World Cup final by Spain before their run to the last four in Brazil last summer, where Argentina defied them after a 0-0 draw.

Guus Hiddink was the man entrusted to guide them through qualifying for the 24-team tournament.

However two defeats in their three opening matches against the Czech Republic and Iceland made their task difficult and their record of four wins, four defeats and a draw leaves the Dutch two points behind Turkey with one game to play. "The whole qualifying tournament has been very difficult. We now no longer have it in our own hands. I feel terrible, really terrible," star striker Robin van Persie said after the 3-0 September defeat in Turkey.

Danny Blind has since replaced the departed Hiddink but the Czech Republic is guaranteed their place in France, alongside Iceland, while Turkey currently controls the playoff-bound third spot. Only a Dutch win and a Turkish defeat at home to Iceland can save the Netherlands. The team still boasts several household names such as van Persie, Wesley Sneijder, injury-prone Arjen Robben and Klaas-Jan Huntelaar but the biological clock has been ticking against an ageing team that may be past its sell-by-date.

The defense has also been called into question with inexperienced players such as Bruno Martins Indi, Stefan De Vrij, Jeremy Bruno, all 23, and 19-year-old Jairo Riedwald, in a rearguard described by former Dutch great Johann Cryuff as "astonishingly" lacking in quality.

Elimination today will force reconstruction but it now appears a certainty that the Netherlands will fail to qualify for a major tournament for the first time since the 2002 World Cup and the first European Championships since 1984.
RELATED TOPICS