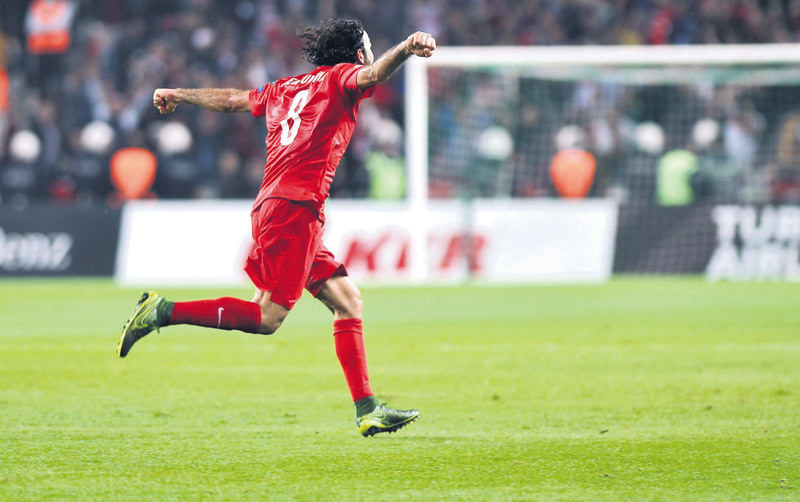 Turkey, who had all but lost hope of qualifying for Euro 2016 just two months ago following their dramatic draw with Latvia on home soil, secured direct qualification from Group A as the best third-place team with Selçuk İnan's last-gasp free kick securing a 1-0 win at home against Iceland on Tuesday.

Turkey rose out of the ashes thanks to 13 points in their last five matches. They needed to avoid defeat to Iceland, in case the Dutch beat the Czechs, and had an outside hope of finishing as the third-placed team with the best record in the nine qualifying groups if they won and Kazakhstan also beat Latvia.

And all of Turkey's dreams came true on Tuesday night. Turkey won, the Dutch lost 3-2 against Czech Republic and Kazakhstan won 1-0 in Latvia to send the Turks to the finals for the fourth time.

Before Tuesday's matches kicked off Hungary had the best third-placed record but they now go into the playoffs. However, Turkey finished as the best third-placed team above Hungary, who lost 4-3 in Greece on Sunday, because Kazakhstan won 1-0 away to Latvia and moved above them into fifth on the head-to-head.

Turkey finished with 18 points, ahead of the Netherlands on 13, while the Czech Republic won Group A with 22 points, two ahead of Iceland.

Joining Norway in Sunday's playoff draw are Hungary, Ukraine, Denmark, Sweden, Ireland, Bosnia-Herzegovina and Slovenia. The two-legged series will be staged between Nov. 12 and Nov. 14 and Nov. 15 and Nov. 17, with the four winners heading to France next year.

The Turks, who finished with 10 men after midfielder Gökhan Töre was shown a straight red card after 77 minutes for a shocking challenge on Jon Dadi Bodvarsson, had to wait until the 89th minute for İnan to score from 25 meters.

"As a country we really needed this win to feel happy, even for a few hours maybe. We are so happy to have offered some happiness to our people," said coach Fatih Terim.

He was referring to last weekend's bombing in the capital Ankara that killed almost 100 people.

"We have a younger team now, and it's making us even more proud that this young bunch achieved this," he added, saying Turkey will go to Euro 2016 with an even younger squad.

Iceland, having already won a place at next year's finals in France, failed to cause the Turkey defense much trouble and had to settle for second place in the group, leaving the home fans to celebrate amid jubilant scenes on the pitch in Konya.

Delighted Turkey captain and midfielder Arda Turan said: "We made such a poor start to the group. But we believed, we fought, and we succeeded. We are so delighted not to have disappointed our people who never gave up on us."

Prime Minister Ahmet Davutoğlu welcomed Turkey's qualification for the 2016 European football championship and congratulated the team on Wednesday. Davutoğlu phoned and congratulated Chairman of the Turkish Football Federation (TFF) Yıldırım Demirören and team captain Arda Turan after Tuesday's victory. In addition, Akif Çağatay Kılıç, the minister of youth and sports, thanked "everyone for their efforts" and wished the Turkish national team the best of luck.

"I am congratulating our national football team that succeeded in directly qualifying for the European Football Championship," Kılıç said in a statement. Demirören added: "We all excited, our players made us excited; I thank them, they wrote history." Some Turkish dailies and football commentators expressed their surprise over the team's success and depicted it as a "miracle."

Filled with tears of joy

Arda: We deserved it

Turkey's talismanic midfielder Arda Turan expressed his joy over the victory, saying: "My friends protected their jerseys and their country, and in return they deserved this victory." Turan, who this year signed for Barcelona, said in a emotional comments after the game the country needed the boost. "My condolences to the Turkish people, we share their pain. I am very happy for our country, if we were able to offer some respite to our people," he said.

Kazakhstani player Islambek Kuat has come to the fore after he scored a goal against Latvia, paving the way for Turkey to take a direct step to EURO 2016. Born in 1993, Kuat plays in Kazakhstan's Kairat Almaty. According to the website "Transfermarkt," the market value for Kuat is 150.000 Euro. He scored his first goal against the Netherlands. He made another score against Latvia on Tuesday night. Kuat scored 2 goals in 4 national football plays. Kuat, who plays as a libero in the front zone, started his football career in Astana. In 2014, he was transferred to Kairat Almaty. With his goal, Kazakhstan won its first victory in qualifiers.

After the match, Kuat said, "I am very happy for this win." He said that he is also happy for Turkey and Turkish people. "Prior to the match, the problems of other teams did not concern us. We first wanted to solve our problems and defeat the other team. However, the good news I heard about Turkey's step made me feel very happy. As a brother country, I am happy to see Turkey in EURO 2016. I hope they will be successful in France. They have already a very good team," he concluded.

Next year's European Championship in France was enlarged from 16 teams to 24. There still wasn't a place for the dismal Dutch. The 1988 European champions and three-time World Cup finalist completed a catastrophic qualification series Tuesday with a humiliating 3-2 defeat in Amsterdam to the 10-man Czech Republic. As if saving their worst for last, the Dutch went 2-0 down in 35 minutes, Robin van Persie scored an own goal and a late rally was not enough to secure a win that ultimately wouldn't have got Danny Blind's team to France anyway. "In the end, the disappointment is in the whole qualification campaign," coach Danny Blind said. "We have not been good enough." It was a stunning admission in a nation where teenagers have emerged as future stars with every World Cup or European campaign since the 1970s from Johan Cruyff to Marco van Basten, Dennis Bergkamp and Van Persie. Look around and there are no worthy successors.

It made for a spectacular fall from grace for the Netherlands, who opened last year's World Cup in Brazil with a dazzling 5-1 defeat of reigning world and European champions Spain and went on to reach the semi-finals, where Argentina needed a penalty shootout to prevail. In Group A, the architects of Total Football failed totally. "It is a collective failure," midfielder Wesley Sneijder said.

It was the first time since the 2002 World Cup that the Netherlands had failed to qualify for a major tournament and the first European Championship since 1984 the Dutch have missed. While teams like Albania, Wales and Northern Ireland made it to the tournament in France, the Netherlands will watch it on TV.

Veteran stars like Sneijder and Van Persie misfired again Tuesday and will now be wondering about their international futures as the country inevitably looks to rebuild ahead of a tough qualifying group for the next World Cup.

The Dutch beat only Latvia and Kazakhstan in Group A. The team did not manage a single victory in six matches against Turkey, the Czech Republic and Iceland. The bad news for Dutch football fans is that the team's qualification group for the 2018 World Cup looks even tougher than its Euro 2016 group - featuring heavyweights France and Sweden - as well as Bulgaria, Belarus and Luxembourg.

Rubbing salt into the Netherlands' wound, neighbor and perennial rival Belgium moved top of the FIFA rankings and qualified as the Group B winner with a 3-1 victory over Israel. "Let's be chauvinists today," Belgium captain Vincent Kompany said. "The Dutch have crashed out and we're No. 1. Let's just be proud." Belgium are on top of the world well, at least the FIFA rankings, only the eighth nation to get the distinction. "I am super pleased. Yes! No. 1 in the world," said Mertens on Belgium's unlikely run from 71st place in 2007 to sweeping past Germany and Argentina over the past weekend to top place. In a head-to-head for a third-place playoff spot, Bosnia-Herzegovina beat Cyprus 3-2 to give the 2014 World Cup finalists a shot at a second straight major tournament from the playoffs. In Cardiff, Real Madrid's Gareth Bale was celebrating. With the last goal of Wales' successful campaign, he set off the party for the team's first qualification for a major tournament since 1958 after Aaron Ramsey had scored the opener. With some help from Italy, Croatia qualified for its fourth consecutive European Championship after a 1-0 win at Malta.

Croatia claimed second place in the group after Italy came from behind to beat Norway 2-1. Ghana-born midfielder Alexander Tettey scored with Norway's only shot of the first half. "We did what we had to do," Italy coach Antonio Conte said. "We didn't deserve to lose. I always want this intensity and this nastiness. We're on the right road. It's important to have this approach, whether you win or lose." Italy won the group with 24 points and Croatia, who had a point deducted for a swastika that was painted on the pitch before a match against Italy finished second with 20. Norway took third place with 19 points, sending the Scandinavian squad to the playoffs.

The below table shows the ranking of the third-place teams in the qualifying competition's group stage, which ended on Tuesday.