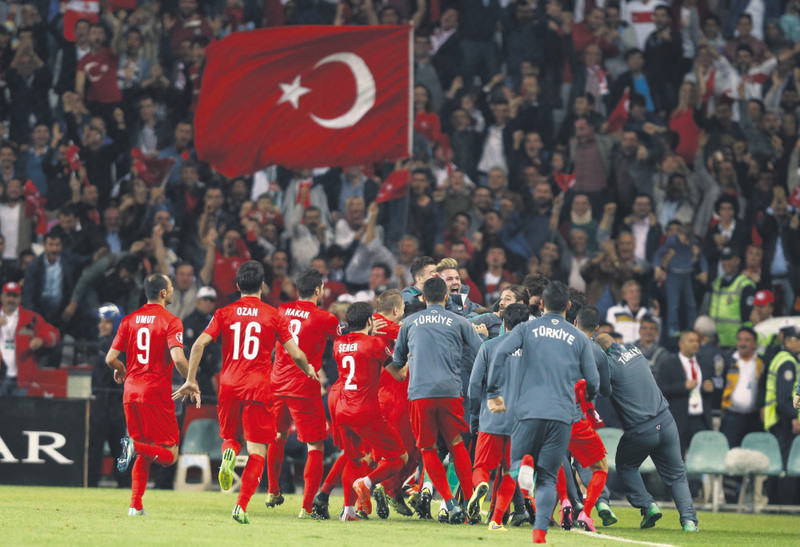 The Turkish national team miraculously managed to snatch automatic qualification for Euro 2016 as the best third-placed team. Now the Crescent-Star team are eyeing the playoff draw. The draw ceremony begins on Sunday and takes place at the House of European Football in Nyon, Switzerland.

After 13 months and 260 games, the Euro 2016 qualifying group stage is over. The winners and runners-up in all nine groups have booked berths at next summer's finals alongside hosts France, as well as Turkey, the best third-placed team. The eight remaining third-placed sides will contest play-offs over two legs in November to determine the last four qualifiers.

The eight teams in the draw have been divided into two groups of seeded and non-seeded teams, based on the UEFA national team coefficient rankings. Bosnia and Herzegovina, Ukraine, Sweden and Hungary are seeded for the play-off draw, with Denmark, Republic of Ireland, Norway and Slovenia possible opponents.

Turkish football fans are wondering now in which group Turkey will be included for the Euro 2016 finals.

In the Euro 2016 finals, to be held between June 10 and July 10 in France, the qualified teams will be divided into six groups with four teams each. The teams will play one match with their rivals in their groups and the first two ranked team will advance into the knockout stages. The four best third-placed teams will also advance to the second round.

The eight teams involved in the play-offs were those that finished third in their qualifying groups other than Turkey, who secured a finals place as the nation with the best record against the sides first, second, fourth and fifth in their section.

The first legs take place between Nov. 12 and Nov. 14, with the second legs following immediately from Nov. 15 to Nov. 17. What if the tie finishes level? Then, the away goals rule counts at the end of the tie, with the team that scores more away goals qualifying for the finals. If that too is equal, then extra time is played. If, during extra time, both sides score the same number of goals, away goals count double (i.e. the visiting team qualifies). If no goals are scored during extra time then it goes down to penalties.

Turkey previously participated in European Championships three times in 1996 and 2008 with Fatih Terim and with Mustafa Denizli in 2000. In the tournament held in England in 1996, Turkey were eliminated without scoring a goal. In 2000 Turkey managed to advance to the quarter-finals but were eliminated by Portugal in the quarter-finals in the championship held in the Netherlands and Belgium. In 2008, the Crescent-Star team had a great tournament and advanced to the semi-finals. They were defeated by Germany 3-2.
Last Update: Oct 16, 2015 2:14 am