Making 4 for 4 Lions go on top 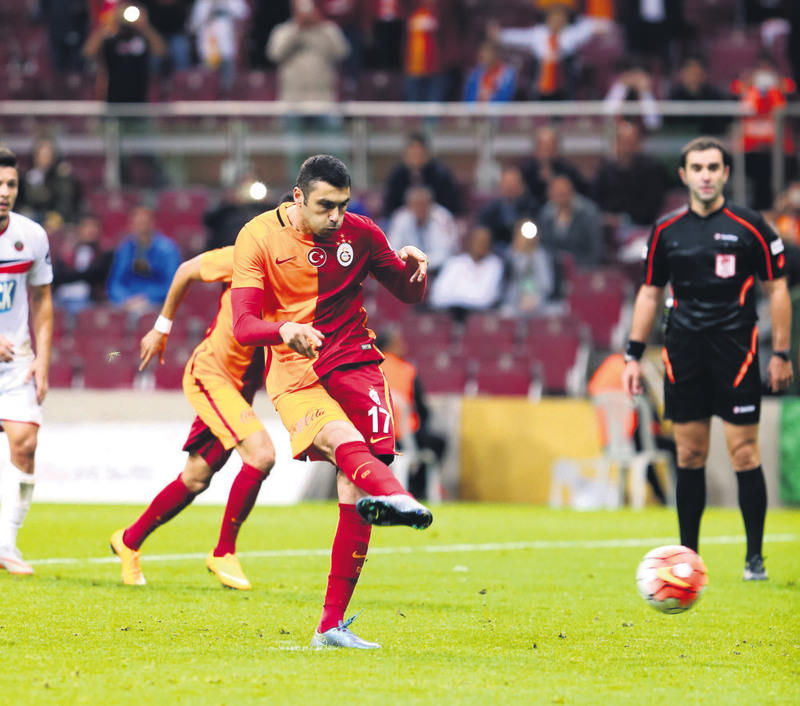 Reigning Super League champion Galatasaray won their fourth consecutive match after defeating Gençlerbirliği 4-1. Coach Hamzaoğlu was delighted with the victory, saying: ‘We played the most eye-pleasing match of the season

The Lions made one of the worst starts in the Turkish Spor Toto Super League by racking up two draws and one loss during their first four games. However, the Yellow-Red team has pulled themselves together and won its last four matches. The last match they lost points was against Mersin İdmanyurdu with a 1-1 draw. After that match, they beat Trabzonspor, Gaziantepspor and Medipol Başakşehir. In this period they scored nine goals while they conceded only two goals. Eight games, Galatasaray has gotten off to its best start in six seasons.

During the match, Gençlerbirligi took the lead when El Kabir scored in the 37th minute and went into the break with the lead. Galatasaray responded soon after with Bilal Kısa scoring a rare header five minutes after half-time. Aurelien Chedjou gave the Lions the lead with another head just a few minutes later.Second half substitute Yasin Öztekin put the game out of sight in the last 10 minutes and Burak Yılmaz scored on a 90th minute penalty to guarantee all three-points. Gençlerbirliği has yet to record a single point on the road.

Galatasaray's star striker Yılmaz, who remained apart from his team for a while due to his injuries, wore his jersey in the 84th minute and was able to find the net.Galatasaray's coach Hamza Hamzoğlu said in a press conference after the match: "We have a very difficult schedule ahead of us. Galatasaray can come through this hard period. In the second half of the match, we played against Gençlerbirliği in a way that we should have played in the first half. Actually, we did not play badly in the first half. But our rivals managed to find the net. I congratulate my players."

Regarding the performances of Bilal Kısa and Yasin Öztekin, who came off the bench in the second half, Hamzaoğlu said, "I'm content with not only Yasin and Bilal but also all my players. Everybody practices hard. I think we played the most fulfilling, eye-pleasing match of the season."

Regarding the upcoming Benfica and Fenerbahçe matches, Hamzaoğlu said, "We are entering a very hard period. But Galatasaray is used to these kinds of battles. We will play two matches within four days. I hope we will get our first win in Champions League against Benfica."

On Semih Kaya who is rumored to be transferred by Inter in the half-season, Hamzaoğlu said, "I never thought to release Semih Kaya. Maybe we don't take him on the pitch but Semih is a very important player to us. He fits in with Chedjou and Hakan Balta. I'm content with all my players."

Meanwhile, Galatasaray President Dursun Özbek said, "A much more resilient Galatasaray is on the way. We want to win against our archrivals, Fenerbahçe, next weekend on their home soil. If our fans will be more patient, a stronger Galatasaray will be waiting for them. Our team's performance is increasing day-by-day. Galatasaray fought for the win in the second half. The match we will play against Benfica in the Champions League is also very important. Benfica has six points and is ranked first. We want to change the rankings in the group. If we win this match it will be a much more exciting group."

Elsewhere in the Spor Toto Super League, Antalyaspor returned to its winning ways with a 2-0 win over Bursaspor at the Atatürk stadium on Saturday.

Summer signing Samuel Eto'o opened the scoring by making the most of a comedy of errors made by Bursaspor's defense. The former Chelsea player now has six goals in his last eight games in the Turkish Super League for the Mediterranean-based side.

Emrah Bassan doubled the Scorpions lead in the 90th minute to take home all three points, ending a three-game winless run. Antalyaspor moved into 5th place with 14 points following the win over the Green Crocodiles. Antalyaspor's flashy transfer, Eto'o, made a significant contribution to his team this season. Antalyaspor won all four matches in which Eto'o scored. They drew and lost in four matches in which Eto'o could not score.