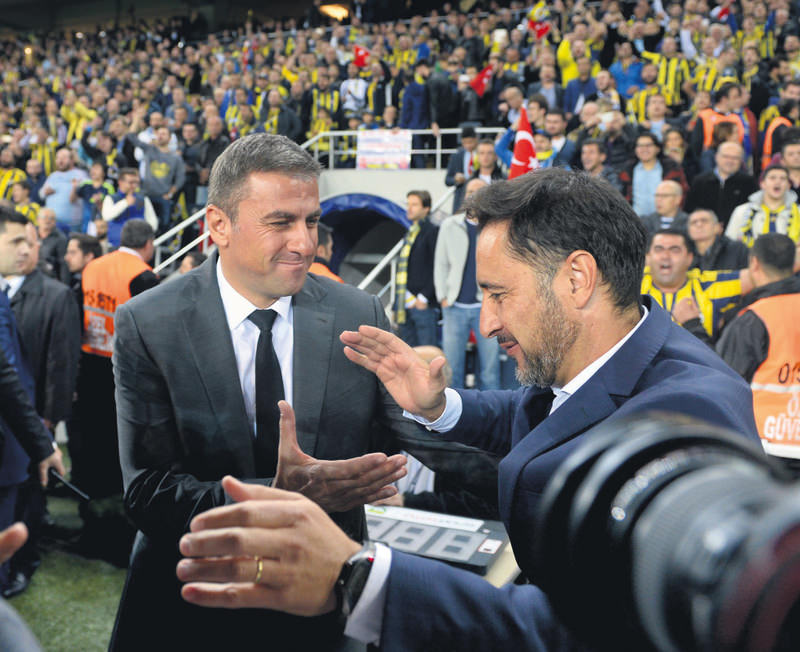 by Arda Alan Işık Oct 27, 2015 12:00 am
I bet both Fenerbahçe coach Vitor Pereira (above-R) and Galatasaray coach Hamza Hamzaoğlu (above-L) prepared their teams for the Turkish "el-clasico" with iconic thrash metal band Slayer's songs. Given the match was more like a Mortal Combat game than a decent football match, these lyrics from Slayer perfectly sum up what the players had in mind before the game: "Sport the war, war support. The sport is war, total war. When victory is a massacre, the final swing is not a drill. It's how many people I can kill."

Well, I do not know if Pereira or Hamzaoğlu are diehard Slayer fans, but the thing is they were true warmongers on Sunday night. The fear of losing against their biggest rivals and the following embarrassment captured their soul. Thus, both opted for brutal physicality throughout the game, in order to exterminate any possibility of creativity, regardless of whether it was a massacre or not. While this butchery was happening, they forgot the fact that they also had to create opportunities. Therefore, especially the first half was nothing more than an exchange of fire by two sides hiding in a bunker.

However, except the fear of the opponent, the other main reason why both teams could not produce anything positive from the first whistle to the last was Vitor Pereira and Hamza Hamzaoğlu's simple and superficial strategies. Both coaches put defensive priorities on the table first, which I understand even though I do not agree, but what was completely incomprehensible was that they did not plan anything for the attack. While Hamzaoğlu positioned his defense and midfield deep in his own half, his only plan, or merely hope, for goals was unguided crosses that right back Sabri Sarıoğlu made for striker Umut Bulut.

In the other dugout, Pereira also responded in the same way by putting two defensive midfielders, Josef de Souza and Mehmet Topal, in front of his defense, tightly closing all the gaps with six players. Nonetheless, you know, it is not so hard to defend with six people, but the problem, if you have too many defensive players, is that there is then not much left for the attack. Four players are not sufficient for organizing a sophisticated attack or keeping possession around the opponent's penalty box. Pereira knew it; thus, he basically chose the same primitive counter attacking strategy as his colleague Hamzaoğlu. Then, the game was pretty much a painful battle between poor forwards and merciless defenders.

Now, if Turkish football has passed the "solely defense" era like third class teams, then the next objective must be achieving the offensive organizational skills that the best clubs in Europe possess. Both Hamzaoğlu and Pereira proved that they are able to protect their goal with 10 men, I salute them for their success. Nevertheless, now their fans and the historical progress of the Turkish football expect them to create teams that play for the top honors in Europe. In order to do this, they must also prove that they can implement sophisticated strategies and tactics. This country has had its fair share of war cries already. Can we see some real football now?

Although Galatasaray goalkeeper Fernando Muslera seemed busier and more successful than Fenerbahçe goalie Volkan Demirel, I would say both did not perform well. Muslera's most crucial mistake was his uncertain intervention in Gökhan Gönül's cross, which resulted in a goal for Fenerbahçe. He should have either punched the ball or never left his goal, but slapping the ball to talented Fenerbahçe midfield Diego's foot was the worst thing he could do. Added to that, even though it was slightly offside, his hesitation nearly cost Galatasaray a second goal. Again, if you leave your post, never look back, even if you are diving into 10 men. Goalkeepers should always keep in mind that they have an advantage in aerial competitions. On the other hand, Volkan Demirel was in the wrong position when Olcan Adın scored the equalizer for Galatasaray. He should have monitored his position better.
RELATED TOPICS