Galatasaray look for victory in Lisbon 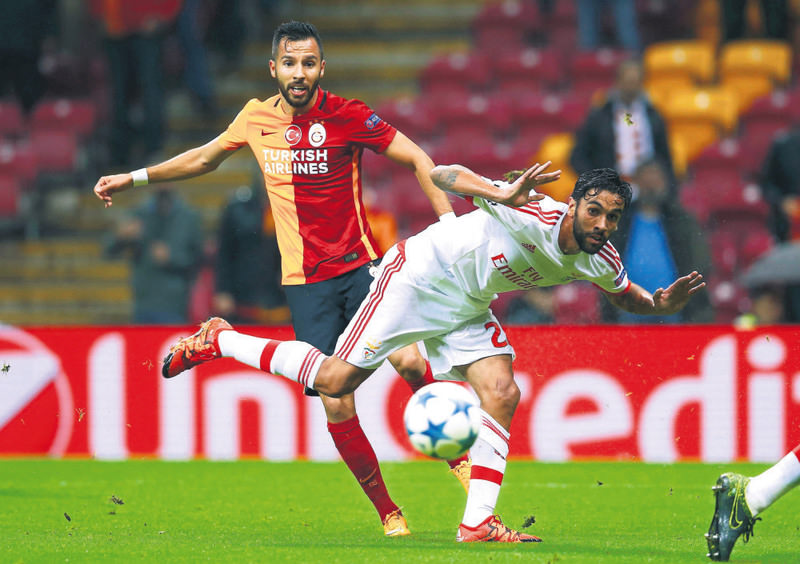 Galatasaray's Yasin Oztekin (L) is challenged by Benfica's Silvio during their Champions League Group C match at the Ali Sami Yen stadium in Istanbul on Oct. 21.
by daily sabah
Nov 03, 2015 12:00 am

Galatasaray notched their first win in Europe in 11 matches with their win against Benfica on match day three. It revived their challenge for the qualifying places and put them in good heart for the return fixture.

They were the first points Benfica have dropped in Group C and mean that, although they share first place with Club Atletico Madrid, their advantage over their Turkish opponents is now only two points.

The teams met in the 2008-09 UEFA Cup group stage when Emre Aşık and Ümit Karan struck in Galatasaray's 2-0 away victory. Luisao played in that contest.

Competing in their 11th UEFA Champions League group stage, Benfica began with a 2-0 home victory over FC Astana and then beat Atletico Madrid 2-1 away.

When the Portuguese champions - European Champion Clubs' Cup winners in 1961 and 1962 - lost 2-0 to FC Zenit on last season's matchday one it was their first reverse in 14 European home encounters (W11 D2).

Their other two home games last season produced a win and a draw, but it did not prevent them finishing bottom of Group C with five points.

Cimbom's only other visit to face Portuguese opposition also resulted in victory, winning 2-1 at SC Braga in the 2012-13 UEFA Champions League group stage with Burak Yılmaz on the scoresheet to book their place in the round of 16. They had lost the reverse fixture 2-0.

The Turkish double winners, who are in their 14th group stage campaign and their fourth in succession, started this season with a 2-0 home defeat by Atletico before drawing 2-2 at Astana.

In last season's group stage, Galatasaray suffered successive 4-1 defeats on their travels against Arsenal FC and then Borussia Dortmund before a third reversal, 2-0 at RSC Anderlecht, to finish at the bottom of Group D.

Galatasarasay have not won an away UEFA Champions League match since a 3-2 victory at FC Schalke 04 in the 2012-13 round of 16 second leg - their third away win in a row and one that secured a 4-3 aggregate triumph. Their away record since then is D2 L7.

Cimbom's best performance came in 1988-89 when they reached the European Cup semi-finals.

Selçuk and Burak are a booking away from a ban. Galatasaray are eight games unbeaten in all competitions since their matchday one defeat. Cimbom recorded their biggest win of the season when they defeated Eskişehirspor 4-0 on Oct. 29, Burak scoring twice. Hamit has resumed light training, having undergone a left knee operation in early August. Meanwhile, Galatasaray's French left-back Lionel Carole, who has a hamstring injury, will miss the match as well as midfielder Hamit Altıntop, who has a knee injury. Also, home team Benfica's Greek midfielder Andreas Samaris remains suspended.