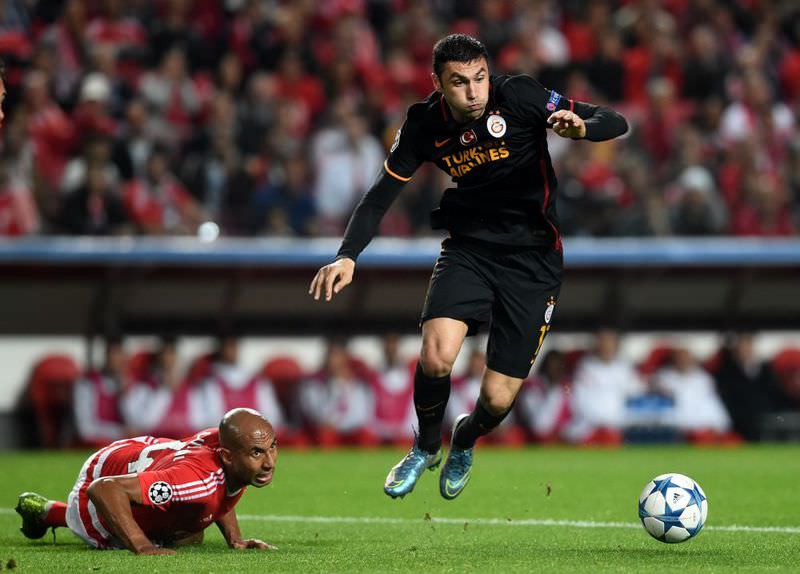 After Galatasaray lost to Portuguese side Benfica 2-1 in their UEFA Champions League Group C clash on Tuesday, coach Hamzaoğlu said, ‘If there is any hope, we'll keep it till end'

Galatasaray missed an opportunity to ease their way into the second round of the Champions League after they were beaten by Benfica 2-1, the same score they got one week ago in Istanbul. If Galatasaray had won the match they would have become the leaders in their UEFA Champions League Group C. Benfica are top with nine points from four matches above Atletico Madrid on seven, after they drew 0-0 at Astana, who have two. Galatasaray are third on four points.

The Portuguese team secured a 2-1 win over visitors Galatasaray with second-half goals from Jonas and captain Luisao but finished with 10 men in their Champions League Group C clash on Tuesday. Diego Gaitan was dismissed in the 85th minute for a second yellow card after a foul and will miss the next match against Astana. Jonas opened the scoring for the Portuguese side with his first goal in the competition this season after the ball came to him near the penalty spot after 52 minutes. Six minutes later, the Istanbul side equalized when Lukas Podolski fired past Julio Cesar from inside the box. Benfica went back in front when long-serving captain Luisao fired into the top corner from inside the area in the 67th minute.

Galatasaray tried hard to level the score again and created several chances but failed to find the net.

After the match Galatasaray coach Hamza Hamzoğlu said that they would fight for a place in the second round until the end. "The goal we conceded towards the end of the match put us in a difficult situation. We forced our rivals to recede toward the end of the match. It seems difficult but if there is any hope we will keep it until the end. We have two matches ahead of us and will take to the field to win."

Having been booked in Lisbon, Galatasaray striker Burak Yılmaz and central midfielder Selçuk İnan are suspended for the next match against Atletico Madrid, to be played in Spain on Nov. 25.

Elsewhere, Real Madrid and Manchester City became the first teams to qualify for the knock-out phase of the Champions League Tuesday with victories over Paris-Saint Germain and Sevilla respectively. The 10-time record champions Real were far from convincing against PSG but triumphed 1-0 with Nacho getting the goal in the first half, soon after being substituted on for the injured Marcelo.

"They had a lot of possession and they also caused us problems on the counter," Real defender Sergio Ramos said. "You always want to win every game, but sometimes you cannot. Today we got three very important points, but we have to keep on improving.

"The bad news is the injury to Marcelo, who was in the best form of his career. We hope that it's not anything serious and he's ready for the next game."

With Shakhtar Donetsk cruising to a 4-0 win over Malmo with strikes from Olexandr Gladkiy, a Darija Srna penalty, Eduardo, and Alex Teixeira, Real qualify from Group A on 10 points from four games while PSG are second on seven.

In Group D, Manchester City produced a superb performance to defeat Sevilla 3-1 in Spain and reach nine points. "It is very important to qualify for the next stage, now we will try to qualify in first position," Manchester City manager Manuel Pellegrini said. Elsewhere in that group, Juventus survived a red card to Hernanes to draw 1-1 at Borussia Moenchengladbach as Stephen Lichtensteiner cancelled out Fabian Johnson's opener for the hosts in the first

Group B remains incredibly tight as Wayne Rooney scored late on to give Manchester United a 1-0 win over CSKA Moscow and take his team into first place on seven points. PSV Eindhoven joined Wolfsburg on six thanks to Juergen Locadia and Luuk de Jong netting in a 2-0 win. CSKA are bottom on four.
RELATED TOPICS