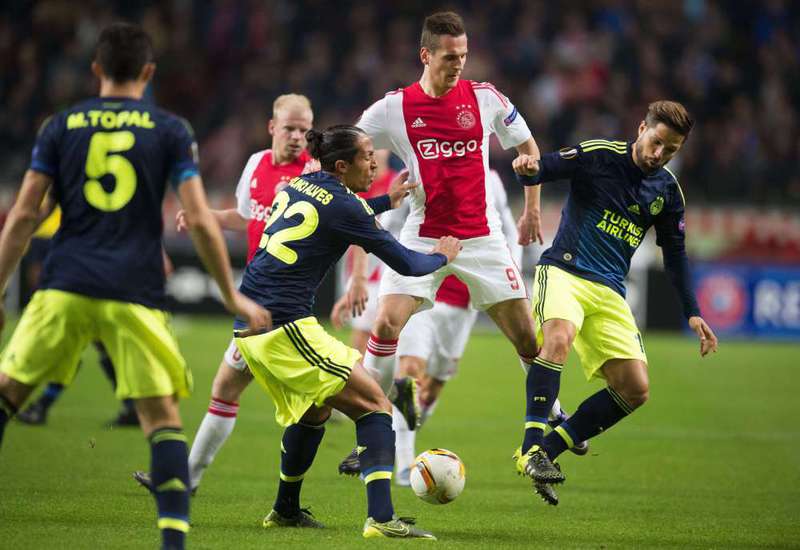 by Daily Sabah Nov 07, 2015 12:00 am
Fenerbahçe and Beşiktaş drew with Ajax and Lokomotiv Moscow respectively, maintaining their strong position to advance to the second round. On Thursday night in Amsterdam, a well-organized Fenerbahçe played in a compact and disciplined manner that stifled the Ajax midfield, disrupted their build up from the back and consequently cut off their support to their front line.

Afterward coach Frank de Boer talked about an "unbelievable amount of possession lost in the first half and only slightly less in the second," but this was not solely due to poor play on his players' part, it was also down to Fenerbahçe's tactics. The Istanbul side were amazingly adept at creating the illusion that space was available, and then flooding those areas with players when the ball was played in.

"There was very little room in the middle of the park," Ajax midfielder Nemanja Gudelj told UEFA's website.

The draw leaves Ajax third in Group A, battling for second place with Fenerbahçe and Celtic, while bottom seeds Molde are already confirmed qualifiers.

Group A leaders Molde clinched qualification with a 2-1 victory in Glasgow which leaves bottom-placed Celtic with an uphill challenge to join the Norwegian club in the UEFA Europa League knockout rounds.

Elsewhere, Group H leaders Lokomotiv Moscow stood firm to secure a 1-1 draw against a spirited Beşiktaş side as Baye Oumar Niasse shone again. The Senegal striker, 25 took his tally to three in four UEFA Europa League outings by cancelling out substitute Ricardo Quaresma's opener to keep the Russian outfit firmly on course for the round of 32.

Beşiktaş dominated possession and spent good portions of the first hour camped in Lokomotiv's half, but the hosts had to wait for almost an hour before half-time substitute Quaresma broke the deadlock.

One of the breakthrough stars of this UEFA Europa League campaign, Niasse is no stranger to Turkey having spent 2013-14 at Akhisar Belediyespor. He reminded everyone what they have been missing with a neat trick to create space before a clinical finish.

Over the past two matchdays, Beşiktaş's problem has been conceding first. They drew first blood this time, but a third successive 1-1 Group H draw was not what they were after - only a win will do when they host Skenderbeu in three weeks.

Beşiktaş coach Şenol Güneş said, "We wasted an advantage. But we are capable of doing better. We are a team who can succed and I believe we will succeed. We dominated the game. We deserved to win. If we had won the game, we could have an important advantage. We have two matches ahead of us and can reach our goals by working harder."
Last Update: Nov 07, 2015 1:01 am
RELATED TOPICS