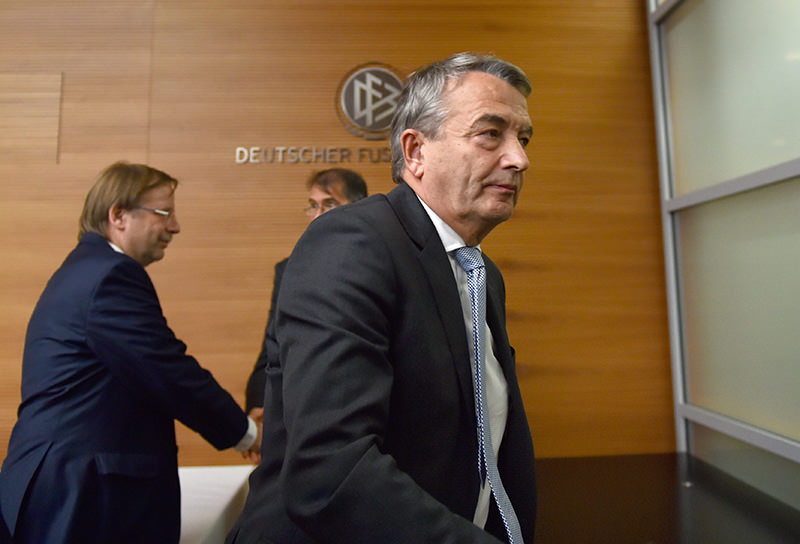 by Associated Press
Nov 09, 2015 12:00 am
The president of the German football federation resigned on Monday over a suspect payment to FIFA, saying that he was taking "political responsibility" despite not having done anything wrong.

The payment in connection with the 2006 World Cup in Germany has led to a tax evasion probe against Wolfgang Niersbach and two other former top-ranking federation (DFB) officials.

"I have realized myself that that the time has come to take political responsibility for the events around the 2006 World Cup ... (although) I can say that I worked there absolutely cleanly and conscientiously," Niersbach told reporters after and emergency meeting of the federation's board.

Frankfurt prosecutors are investigating a payment of 6.7 million euros ($7.22 million) the federation made to FIFA in connection with the 2006 tournament.

Niersbach, who has been the president of the federation (DFB) since 2012, is also a member of the executive committee of both FIFA and UEFA. He had been seen as a possible successor to Michel Platini as UEFA president.

Rainer Koch and Reinhard Rauball, two DFB vice presidents, will jointly take over in a caretaker position and said they wanted Niersbach to continue working in the international bodies. The board had no power to dismiss Niersbach, who stressed that the resignation was a personal decision.

"Things have surfaced in the past few days that lead me to resign, in the sense of political responsibility," Niersbach said, without giving details.

The 64-year-old Niersbach said he was stepping down "with a heavy heart" and "I can say in good conscience that I have nothing to reproach myself" with over the payment at the center of the case.

Niersbach was a high-ranking member of the 2006 World Cup organizing committee in charge of media and marketing and said in a statement released late Monday that he had not been involved in the payment and did not know about it at the time.

Niersbach said the 2006 World Cup remained "a highlight in my career."

"That's why it is more than bitter to find out now that apparently things happened then of which I had no knowledge," he told reporters. Niersbach declined to take questions.

His predecessor, Theo Zwanziger, had accused Niersbach of lying and said he had been aware of the payment at the time. Zwanziger has also said that Germany used a slush fund to buy votes for its successful bid to stage the 2006 World Cup, an allegation denied by Niersbach.

Zwanziger and former DFB general secretary Horst R. Schmidt are also implicated in the tax evasion probe. Agents searched the homes of Niersbach, Zwanziger and Schmidt last week and seized documents. Zwanziger and Niersbach have been foes for years.

When the affair broke, Niersbach said last month that the money was paid to FIFA in return for a substantial grant to the organizing committee in a deal brokered by Franz Beckenbauer and the now suspended FIFA President Sepp Blatter. It was paid through a French businessman and later repaid, according to Niersbach. Beckenbauer has spoken little on the subject, except to say that the deal was a mistake.

Both Blatter and FIFA have denied any knowledge of the payment. It was made on behalf of DFB by the late Adidas chief Robert Louis-Dreyfus in 2002 and repaid in 2005, according to Niersbach's version.

The weekly der Spiegel, which first reported on the payment, said in its last issue that a signature apparently belonging to Niersbach is found on a 2004 document for the payment for Louis-Dreyfus. Niersbach had said he only heard about it the payment vaguely this summer and was given details about it by Beckenbauer last month.

Beckenbauer had been Niersbach's mentor for years. A former journalist, Niersbach was the media chief of the 1988 European Championship in Germany and then became the DFB media director, serving as team spokesman when Germany won the 1990 World Cup with Beckenbauer as coach.

Rising through the ranks, Niersbach won the vote to become DFB president in March 2012, despite Zwanziger's opposition, who had favored another candidate.
Last Update: Nov 09, 2015 8:33 pm