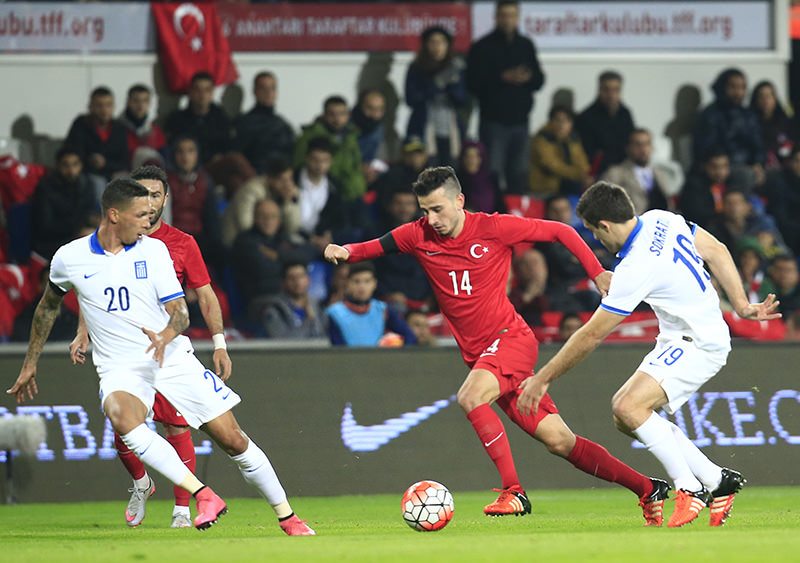 Turkey took on Greece in a friendly match in Istanbul on Monday night with the two rivals eventually finishing in a stalemate. Though the Turkish national team pressed Greece, who are recovering from a string of losses, they failed to score due to the tightened defense line of the visiting team.

The game's first half was rather dull despite Turkey's efforts to score. The second half was marked with attacking intent by Hakan Çalhanoğlu, the German-born Turkish midfielder, and a foiled opportunity to score by Barcelona star Arda Turan in the 54th minute. Though the Turkish team continued its forays into opposition territory, they failed to score in the end while Greece barely managed to made opportunities to score. Except for Kostas Fortounis's efforts, Greece were unable to gather pace and decided to focus on defense toward the end of the match.

The two teams squared off in the presence of Greek Prime Minister Alexis Tsipras and his Turkish counterpart Ahmet Davutoğlu, who watched the game as a sign of cooperation between the two countries that have a checkered past alternating between hostilities and friendship. The two leaders wore neckwear with the flags of Turkey and Greece and met players of both teams after the game.

Turkey's coach Fatih Terim said in the post-game press conference that he was pleased with the performance of his players despite the lack of goals. Terim heaped praise on Fenerbahçe midfielder Mehmet Topal. "He knows how to change the game," he said. Terim also extolled the footballing virtues of Ozan Tufan for his performance. His only complaint was lack of assistance when on the attack. "I have little to do for team's training as they quickly adopt my tactics. The national team is like a club team and instead of teams contributing players to the national team, we give them inexperienced players after helping them to improve themselves," he said.

Terim said Greece have many players at European teams and despite this Turkey succeeded in dominating the game. "We could have won but definitely we wouldn't lose," Terim said.

The Turkish coach also expressed his anger at some Turkish fans booing during the playing of Greek national anthem and the observation of a minute of silence for the victims of the Paris terror attacks. "Where did it come from? It was not pleasant. Can you not just be patient for a minute? Thank God we managed to silence them," he said. "It was wrong to disrespect the (Greek) team. It tarnishes Turkey's image," Terim said.

Speaking after the game, Greece's coach Michael Skibbe said he was satisfied with his team's performance in the friendly. Skibbe noted that games between Turkey and Greece have always been challenging and it was the case as well in yesterday night's game. "Turkey had more opportunities but my team was good in defense though we had a hard time to get past Turkey's defenses," he said. Skibbe praised Turkish defense, adding that the Turkish team played well despite their shortcomings. He said he believed Turkey would have a chance of success in Euro 2016 under the leadership of Terim.