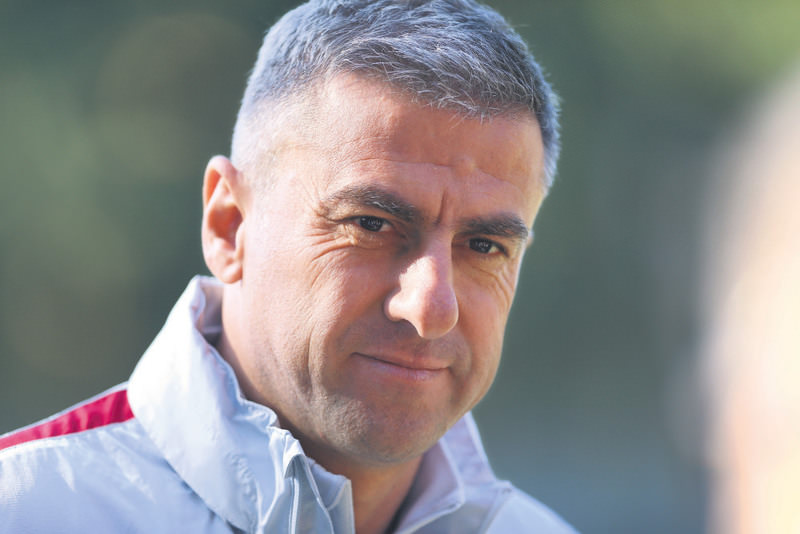 by Arda Alan Işık Nov 21, 2015 12:00 am
Although I often criticized Galatasaray coach Hamza Hamzaoğlu (above) and deride his tactics and strategies, I have to admit that he is one of the most sincere and dedicated coaches in Turkey. After his departure from Galatasaray in recent days, unlike many other unfortunate coaches, he got almost unanimous support from the Turkish media. Hamzaoğlu is a very charismatic figure in Turkish football, and approaches football differently than most of his colleagues, as he explained in an interview: "We want to be a team that is a joy to watch. We want to be a city where football can truly be played. These are my goals and I insists on these views so that people can perceive football in this way. Even though football has become a huge financial sector where billions of dollars circulate, if we can put these aside and choose the game over money, then we can enjoy this beautiful game. The most important thing for me is to enjoy football, because this game means peace, love and friendship."

He made this interview when he was coaching a little remote Anatolian team, Akhisar Belediyespor, when he had much more freedom compared to his days in Istanbul. He was a former right winger for Galatasaray and a respectable member of the Galatasaray community, but he never gained the respect he deserved until he made his project in Akhisar a noticeable success. That was the reformist side of Hamzaoğlu, which lifted an Anatolian team that no one knew into the Super League. After that, his national team career with Fatih Terim and approximately one year at Galatasaray was not a thrilling experience for football fans like himself.

However, even if Hamzaoğlu has adapted his game to the dinosaurs of Turkish football and decided to put aside his reformist ideas for the short term, he was still a good investment for Galatasaray's future. Given the fact that Galatasaray and Turkish football needs more idealistic rather than pragmatic figures, Hamzaoğlu had the potential to carry Galatasaray in the long term. In another interview, he said: "The most important point of coaching is being honest and sincere. I express my opinions about my players directly to them, I believe this is crucial. I do not see football as a sport that solely focuses on winning and getting good results. I'm happy to be in this game and I want everyone around me to be jubilant about it too. The creation of such an happy environment is so crucial."

And now, think of all the pragmatic and traditional Turkish coaches who only know how to yell and swear at their players and expect them to play wholeheartedly while they put nothing original or thrilling on the table. Which one would you choose? Apparently, the Galatasaray administration wants a commander-in-chief who can bring the championship trophy to the club by any means possible.

Ironically though, Hamzaoğlu brought three trophies to the club last year, despite the fact that he joined the club a month after the beginning of the season and while Galatasaray was in complete administrational and financial crisis.

Now, what these facts indicate is the "new page" obsession of Turkish football executives. Just like what present Turkish Football Federation chairman Yıldırım Demirören did to Beşiktaş in 2004, which cost the club an easy championship, Galatasaray Chairman Dursun Özbek and his crew also wanted to put their own "man" in control of the team.

However, as history shows, leaving teams at the mercy of greedy executives and spoiled players often results in great catastrophes. Fenerbahçe also fired their successful manager Ersun Yanal with a plan to bring in "big guns" to the Fenerbahçe squad, but next year they watched Hamza Hamzaoğlu and his team win the trophy with very limited opportunities.

Given the club's hierarchical structure and complex relations with the secrets funders of the club, Hamza Hamzaoğlu's project in Galatasaray was still born. Nevertheless, seeing as chairman Dursun Özbek has no better vision than Hamzaoğlu and bound to his funders' and supporters' views, his project will taste the same fate.
RELATED TOPICS