Blatter, Platini should be banned from football for life: FIFA 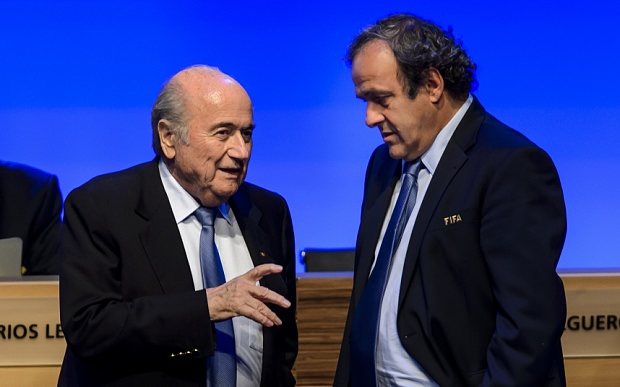 Photo shows Sepp Blatter (left) and Michel Platini. (AFP Photo)
by Nov 24, 2015 12:00 am
FIFA's ethics watchdog wants Michel Platini to be banned for life over a suspect payment, according to the suspended European football chief's lawyer.

Platini is serving a 90-day suspension on corruption charges over a $2 million payment he received from FIFA president Sepp Blatter who is also suspended.

The suspensions were upheld last week by FIFA's appeals committee and Platini's lawyer, Thibaud d'Ales, described FIFA's demand for a life ban as a "scandal" and "excessive".

"This ban is subject to the proof of corruption, but the punishment is clearly excessive," D'Ales said.

"It's not based on anything in the case."

Blatter's representatives refused to comment on whether the same request has been made against the Swiss official.

FIFA's investigatory chamber announced this week that it had opened a case and a decision is expected to be handed down next month.

Until then, Platini is forbidden to take part in the race to become Blatter's successor as president of FIFA.

Earlier this month, he was omitted from the official five-man shortlist of candidates to run football's scandal-hit ruling body with the election scheduled for February 26.

D'Ales maintained there was a concerted effort inside FIFA to prevent Platini taking over the top job in football. The 60-year-old French football legend had been favourite for the FIFA post until the latest charges were announced.

"It's a pure scandal, and by making it public there's clearly an intention to cause harm.

"The masks are slipping one by one at FIFA - the electoral timetable's being manipulated and there's a stategy to get rid of Platini as a candidate."

FIFA's investigative committee affirmed the report with requested sanctions had been handed over to Platini and Blatter's legal team.

"I can confirm that Michel Platini and his lawyers have got the report and they have also received the request of the investigative committee," a spokesman said, without reference to the sanction demanded.

"They know what is in the report and they are free to comment on it," he added.

On Saturday, FIFA's ethics committee, citing privacy and the presumption of innocence, said it would not disclose the nature of the punishments requested against Platini and Blatter.
Last Update: Nov 24, 2015 10:20 pm
RELATED TOPICS