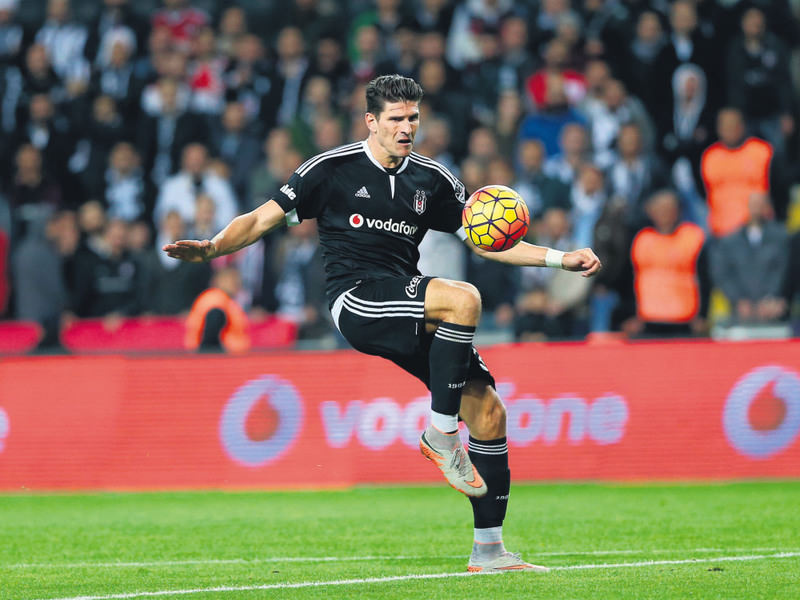 Although the Eagles were unable to attract world-renowned superstars like their archrivals Fenerbahçe did in the summer, they are flying high with new signing Mario Gomez scoring seemingly at will. Due to UEFA Financial Fair Play rules, Beşiktaş, who are carrying a heavy debt burden, had to adopt frugal ways in the summer's transfer season. Under the rules they can only buy a player as long as they sell one first. The club sold their biggest star Demba Ba for 14 million euros to China's Shangai Shenhua allowing them to buy Mario Gomez from Fiorentina for 8 million euros with Ba's transfer money. The risky decision has paid off superbly with Gomez scoring even more than Demba Ba - who was a huge fan favorite - had by the same stage of last season. While Beşiktaş cruised past Sivasspor in the Spor Toto Super League's 12th week and maintained their top spot, Mario Gomez scored his ninth goal of the season in the 43rd minute from the penalty spot and surpassed Ba, who scored eight goals as of the 12th week last season. Beşiktaş's other goal against Sivasspor was scored by Oğuzhan Özyakup in the 90th minute. With 29 points, Beşiktaş are seven points ahead of Galatasaray, while Fenerbahçe are just two points behind with 27 points.

Şenol Güneş said after the match, "We created a lot of opportunities during the match. The weather was very windy and it affected our passing and shooting. We should have kept the ball more. We deserved the win and we are expecting more support on Thursday night when we will play against Skenderbeu in the UEFA Europa League."

Meanwhile, Fenerbahçe's star striker Robin van Persie is cautious about winning the championship. Speaking to Milliyet newspaper, he said, "We are competing with Beşiktaş and Galatasaray. I'm used to this kind of competition. The high expectations of our fans from me makes me proud.

"I have felt myself better in the last few weeks of the league. I would like to stay longer on the pitch but I respect the decisions of our coach. I feel good, as long as I play. I can do more on the pitch. I run, help the defense and the whole team. I hope to score more. We are the favorites for the championship but Galatasaray and Beşiktaş are also in the race."

Antalyaspor again had their star striker Samuel Eto'o to thank this weekend after they earned a 3-3 draw with Galatasaray. The Cameroonian footballer is carrying the Anatolian team with his 10 goals in 12 matches. He has earned 14 of Antalyaspor's 16 points this season with his goals. He has also scored against powerhouses like Beşiktaş and Galatasaray. He is now the top scorer in the Super League, followed by Mario Gomez with nine goals, Leonard Kweuke of Çaykur Rizespor and Hugo Rodagella of Akhisar Belediyespor with 8 goals each.
RELATED TOPICS