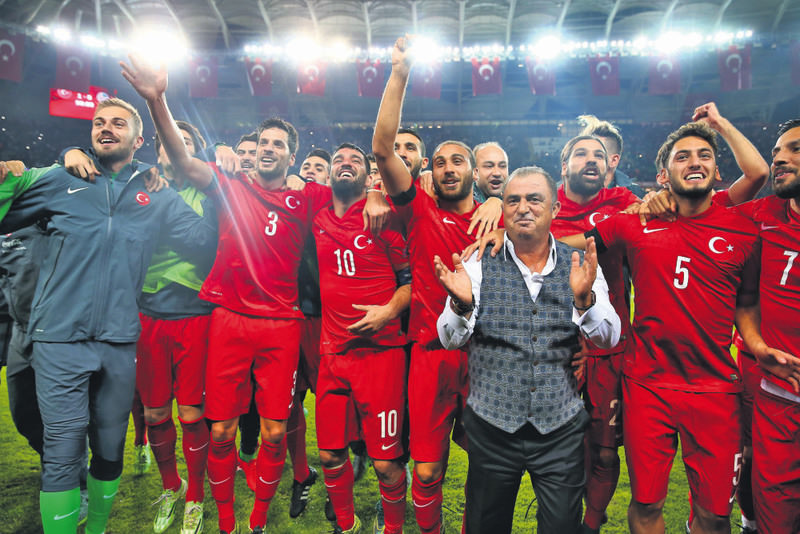 The win over Iceland on Oct. 13 sealed Turkey's automatic qualification for UEFA EURO 2016 as the best third-placed side, bringing joy to a nation reeling from almost a decade of hurt in international football.
by Daily Sabah Dec 04, 2015 12:00 am

Turkey have become the Best Mover of the Year thanks to the 329 points they collected over the last 12 months. A first-place finish on the last ranking of the year sees Belgium claim the Team of the Year award for 2015

According to the world football body FIFA's World Ranking, Turkey were chosen as the Best Mover of the Year thanks to the 329 points they collected over the last 12 months of football. Having last competed at a major tournament back in 2008, Turkey secured a place at the EURO 2016 in a campaign that saw them defeat Netherlands, Czech Republic and Iceland during the crucial final stages. The Crescent-Stars are the biggest climbers of all during qualification, rising from 37th to 21st. Further big movers for 2015 include Hungary (20 places, 313 points) and Nicaragua (92 places, 295 points).

The win over Iceland on Oct. 13 sealed Turkey's automatic qualification for UEFA EURO 2016 as the best third-placed side, bringing joy to a nation reeling from almost a decade of hurt in international football. Turkey last competed at a major tournament at EUR0 2008 in Switzerland and Austria, where they defied expectations by reaching the last four. Their subsequent absence from the big stage will soon be over.

Meanwhile, a first-place finish on the last ranking of the year sees Belgium claim the Team of the Year award for 2015. The Red Devils jumped into first position (their first-ever) on the FIFA/Coca-Cola World Ranking in the November ranking, but a 3-1 victory over four-time world champion Italy in Brussels on Nov. 13 saw them hold on to the coveted position for the final ranking of 2015. The past year has proved to be highly competitive with ranking runners-up Argentina and third-placed Spain outpacing 2014 Team of the Year Germany on the FIFA/Coca-Cola World Ranking for 2015.

Hungary made history in November by defeating Norway in a two-legged playoff to secure a place at EURO 2016 - the tournament will be their first major final since the 1986 FIFA World Cup. Their November results have pushed them into their best-ever position on the World Ranking. Similarly, Kyrgyzstan and Nicaragua have also secured their best-ever ranking positions. In contrast, Portugal dropped three places into seventh having lost 145 points - the most points lost by a team in November.

The December edition of the FIFA/Coca-Cola World Ranking was dominated by 2018 FIFA World Cup Russia qualifiers. Of the 137 matches taken into account for the latest ranking more than two thirds (92 games) were World Cup qualifiers; eight of the 137 games were playoff matches to determine the final four teams to qualify for EURO 2016, and the remaining 37 matches were international friendlies.

"We have a young team and that makes us all even prouder that these young guys have qualified for the EURO," said coach Fatih Terim. The 62-year-old tactician could bring his squad's average age down further still ahead the tournament next year. While Bayer Leverkusen playmaker Hakan Çalhanoglu - already a well-known name in international football - shone in qualifying despite being just 21, another Germany-based player, Yunus Mallı, could soon be joining him in the national team set-up.

The Mainz starlet was born near Frankfurt and played in Germany's youth teams, but has opted to represent Turkey at senior international level. An elegant dribbler, Mallı has been in excellent form for his club this season, and he made his international debut in a 2-1 friendly win over Qatar three weeks ago, having scored seven times in 12 matches for Mainz.

"This is the next step in my career," said the 23-year-old after his run-out against the Qataris. While he hopes his maiden cap will be the first of many, Terim may well have found another young talent to help restore the national team to its former glories.
RELATED TOPICS