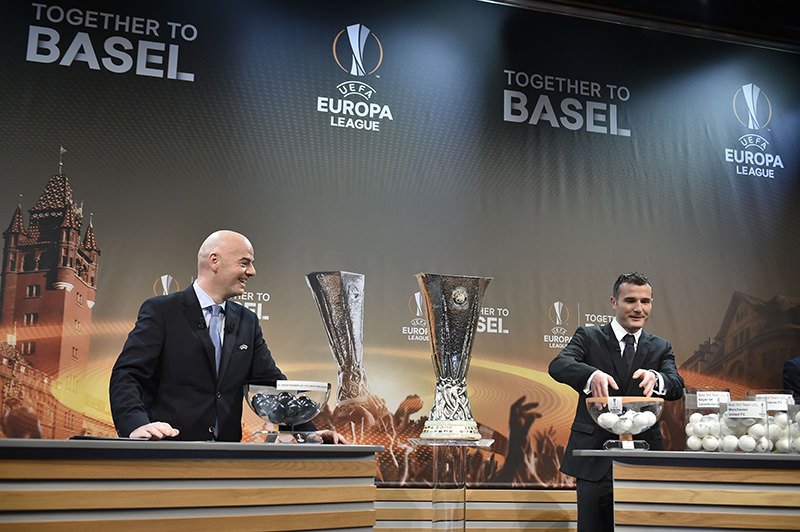 Turkey's Fenerbahçe will take on Russia's Lokomotiv Moscow in the knockout round of the UEFA Europa League, Galatasaray, who were recently knocked out of the Champions League after finishing third in Group C, will play against Italy's Lazio

The draw for the UEFA Champions League and Europa League knockout round was made yesterday in Nyon, Switzerland. Turkey's two representatives, Fenerbahçe and Galatasaray, will face Russian and Italian teams. While the political crisis between Russia and Turkey continues, Fenerbahçe drew Russia's Lokomotiv Moscow for the second round of the UEFA Europa League. Meanwhile Galatasaray, who were recently knocked out of the Champions League after finishing third in Group C, will take on Italy's Lazio.

Galatasaray and Lazio faced off in the 2001-02 UEFA Champions League group stage. Both teams won their home games 1-0. Fenerbahçe will play the first game in Istanbul on Feb. 16, 2016 and Galatasaray on Feb. 18, while the return games will be played on Feb. 25. Following the jet downing on Nov. 24 and the ongoing economic and diplomatic disputes between Russia and Turkey since, the matches between Fenerbahçe and Lokomotiv Moscow are highly anticipated.

Lokomotiv Moscow finished in first place in Group C of the Europa League with 11 points. Beşiktaş, another Turkish team, were knocked out in the same group after finishing third with nine points, just one point behind the second-placed team in the group, Sporting Lisbon. Fenerbahçe finished second in Group A with nine points. Lazio finished first in Group G with 14 points.

Fenerbahçe spokesman Mahmut Uslu said: "We have a settled team. I am sure that we can eliminate Lokomotiv Moscow. When you look, you can't see any weak teams in this competition. When we reached the semi-finals in 2012-13, there were no weak teams then either and we just missed the chance to reach the final. I hope we can have a similar run and go one step further this time."

Galatasaray Football Director Cenk Ergün said: "We want to win over Lazio in the first match in Istanbul and get an advantage for the return match. It is a difficult draw. Italian teams are always difficult teams to play against. However, Galatasaray can eliminate any team."

Elsewhere, Manchester United have been drawn against Danish champions Midtjylland in the Europa League round of 32, while Liverpool will play Augsburg. Louis van Gaal's side dropped into the Europa League after failing to reach the knockout phase of the Champions League. Gary Neville's Valencia face Austrian side Rapid Wien, while Mauricio Pochettino's Tottenham Hotspur are in action against Fiorentina. Bundesliga giants Borussia Dortmund take on Porto, who won the Europa League in 2011, while Bayer Leverkusen will go head-to-head with Sporting CP.

As for the Champions League, Chelsea have been drawn against French champions Paris Saint-Germain for the third year in a row. Jose Mourinho's side lost on away goals after a 3-3 aggregate draw last season having gone through on away goals the year before - after a 3-3 aggregate draw. Arsenal's "reward" for making the last 16 is to face holders Barcelona while Manchester City have a tricky trip to Dinamo Kiev to negotiate. Another clash between big guns will feature former winners Juventus and Bayern Munich, while 10-times champions Real Madrid were drawn against AS Roma. PSV Eindhoven will take on Atletico Madrid, and Benfica will be against Zenit St Petersburg.
Gent, in their first participation in the competition, will take on Germany's Wolfsburg. 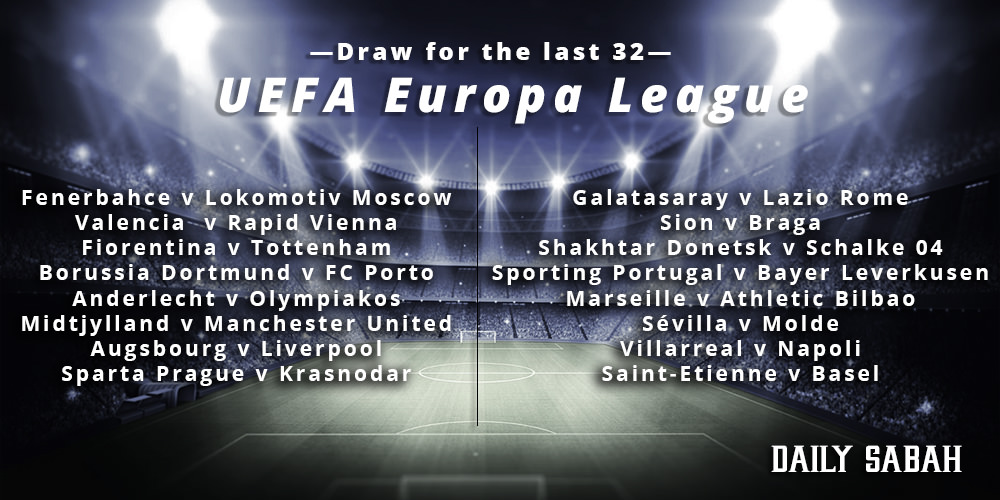