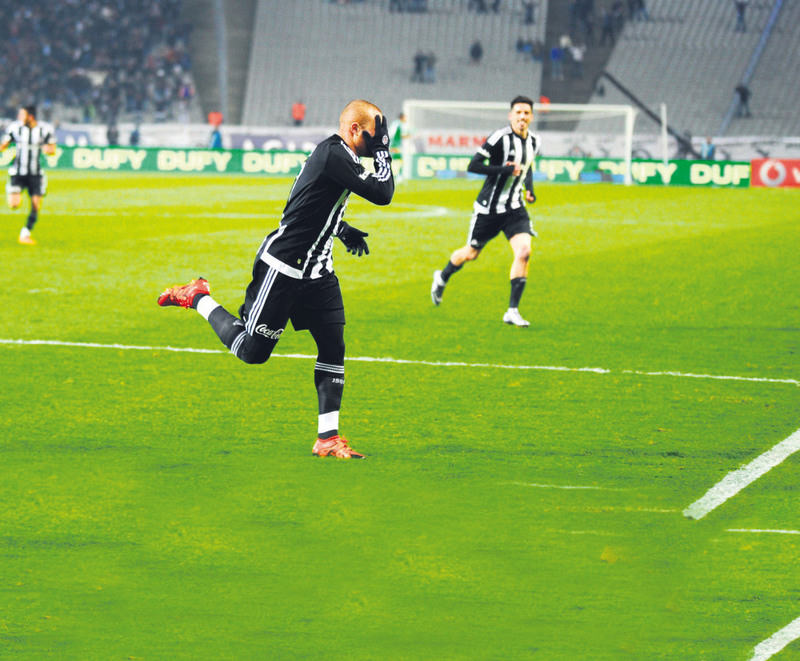 The Black Eagles recorded a 2-1 victory over their Istanbul rivals Galatasaray in the Super League, ending a 10-match winless streak against Galatasaray and returning them to the top of the table

After Beşiktaş lost 3-1 in an away game against Sporting Lisbon in their last Europa League Group stage game on Thursday, they did not want to lose their top spot in the domestic league too. Standing in their way was their old foes, Galatasaray. City rivals Galatasaray, however, have also been suffering poor results despite changing their coach. Traditionally, Beşiktaş have been out of luck in the derbies against Galatasaray and have failed to win in their last 10 matches. Despite going 1-0 down, the Black Eagles finally arrested their luckless streak. Beşiktaş were stunned when Wesley Sneijder put the visitors ahead following a goalkeeping error from Günay Güvenç in the 54th minute. Their anxiety did not last long as Mario Gomez struck back quickly with a driven shot into the bottom corner as the home fans at the Atatürk Olympic Stadium regained their voice. The winning goal came from winger Gokhan Tore in the 74th minute. With Monday's victory, Beşiktaş retained the leadership of the league with 35 points, followed closely by Fenerbahçe with 34 points. Galatasaray are placed fourth with 26 points. The last derby between the teams was played at Galatasaray's home ground, the Türk Telekom Arena on May 24. Galatasaray won the league clash 2-0 as Turkish winger Yasin Oztekin and Dutch star Sneijder scored.

After the match Galatasaray fans voiced their displeasure with the run of bad results and swooped on Galatasaray's Florya Metin Oktay training facilities. They protested against the players as well as calling for the administration to resign. The police took measures at the entrance of the facilities.

Beşiktaş coach Şenol Güneş defended his goalies Tolga Zengin and Günay, who were widely criticized due to their incredible errors, saying: "There are always stories about us seeking new goalies in the media. I have had enough of these rumors. Somebody is doing this deliberately. We are just trying to play football. While we do this we make mistakes. We are suffering after being eliminated from the UEFA Europa League. But everybody in the team is doing their best. We have players who make mistakes but every one of them is a do-gooder. If we had surrendered after all the pressure that came after we made mistakes, we would not be league leaders now." Beşiktaş's German star Mario Gomez said, "I love derbies. It was a hard game because we were eliminated from the Europa League four days ago. We did not deserve to lose. We started the game feeling that disappointment. We have to focus on the domestic league. And we put in a great performance."

Galatasaray coach Mustafa Denizli talked assertively and kept his thoughts to himself and his new team saying: "We are trying to create something within our team. This causes problems from time to time. We started the second half of the match well and found the net. But we conceded a goal that we shouldn't have. However, neither I give up nor Galatasaray. I accepted this job taking full account of potential hardships. We will realize everything we are planning."

After being reminded that his time has now fallen nine points behind Beşiktaş and eight points behind Fenerbahçe, Denizli kept cool saying: "Nobody can ignore Galatasaray in the competition. The rivals ahead of us will keep looking over their shoulders and see us. We will be chasing them.

"If we can't solve the problems within the team, we will them solve outside," signaling they will transfer footballers after the first half of the league ends.

Meanwhile, Mario Gomez has now scored three times in the major Istanbul derbies this season and the Black Eagles have won seven out of the eight games in which he has scored. The Germany international has an impressive 13 goals in all competitions this season and scored his 42nd goal in UEFA competitions against Sporting Lisbon last Thursday - the fourth highest for a German player. Gomez's form has not gone unnoticed by Manchester United either who have registered an interest, according to the Telegraph.
RELATED TOPICS