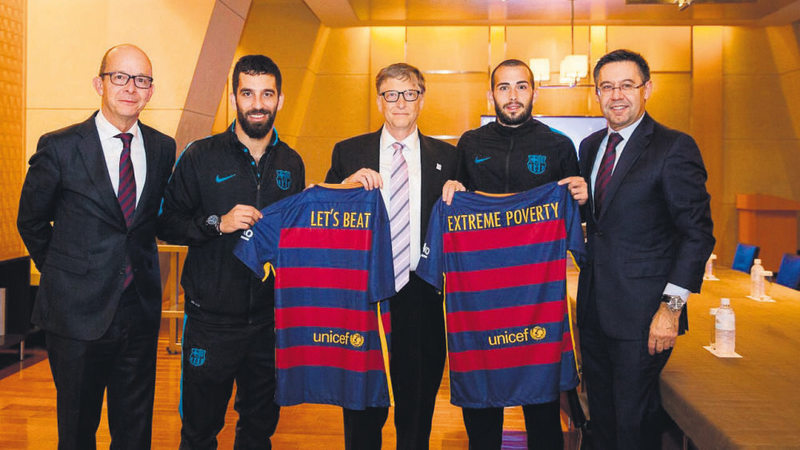 Arda Turan and Alexis Vidal got the chance to meet the world's second richest man, Bill Gates, who checked in with Barcelona to continue his battle against poverty

Thanks to Barcelona's transfer embargo, Arda Turan and Aleix Vidal will not be able to play any part in Barcelona's FIFA World Club Cup campaign. But the trip to Japan for the tournament was still a memorable one for both players as they got to meet Microsoft founder Bill Gates. The Barca midfielders are yet to make their debuts after signing in the summer during the club's FIFA transfer ban. The ban was enforced in April last year after the club was found guilty of breaching rules on the transfers of players aged under 18. Turan and Vidal will become available for Luis Enrique from Jan. 1 onwards, so they will have to sit out the games in Japan - with Barca facing Guangzhou Evergrande yesterday and River Plate awaiting the victors in the final:

Neither player trained with the team, but got the chance to meet with Gates as Barca President Josep Maria Bartomeu discussed the work of the FC Barcelona Foundation and the Bill & Melinda Gates Foundation with the Microsoft co-founder and world's second richest man.

Gates was complimentary of the work Barca are doing and also spoke about the joint "Let's Beat Extreme Poverty" campaign, aimed at raising awareness of extreme poverty and the role that each of us can play to eradicate it. But it must have been a memorable moment for both Turan and Vidal in Tokyo.

Arda Turan shared the photo of him with Bill Gates on social media and said: "It was very good to meet Bill Gates and listen to his precious ideas in this meeting."

Barcelona also released a statement on the meeting saying, Barcelona President Josep Maria Bartomeu, Vice President Jordi Cardoner and footballers Arda Turan and Alexis Vidal participated in the meeting between the Barcelona Foundation and the Bill & Melinda Gates Foundation held in Tokyo, Japan on Wednesday. Both foundations discussed Let's Beat Extreme Poverty. They emphasized the fact that more than 700 million people are suffering from extreme poverty.

Barcelona President Bartomeu said, "We met Gates for the first time as part of our foundations' cooperation against poverty. This is Barcelona's most important cooperation on social issues. It is an honor for us to cooperate with the Bill & Melinda Gates Foundation."

Emphasizing that they have been working on social issues such as child health and poverty with Barcelona, Bill Gates said, "The footballers and teams are helping us to spread good news over digital platforms."

Meanwhile, Luis Suarez scored a hat-trick, including an exquisite second goal, as Barcelona strolled into the Club World Cup final with a 3-0 win over Asian champions Guangzhou Evergrande yesterday.

Guangzhou gave the European champions a couple of scares in the first half but the Chinese side were utterly outclassed by the end of a match that often resembled an attack-versus-defence training session.

Even without Lionel Messi, who was taken ill just hours before the game, and the injured Neymar, Barca enjoyed more than 70 percent of possession as they claimed a place in the final against South American champions River Plate. It was Guangzhou's first defeat under Brazilian coach Luiz Felipe Scolari who took over in June.
RELATED TOPICS