Sent-off football player kicks opponent in the face on purpose 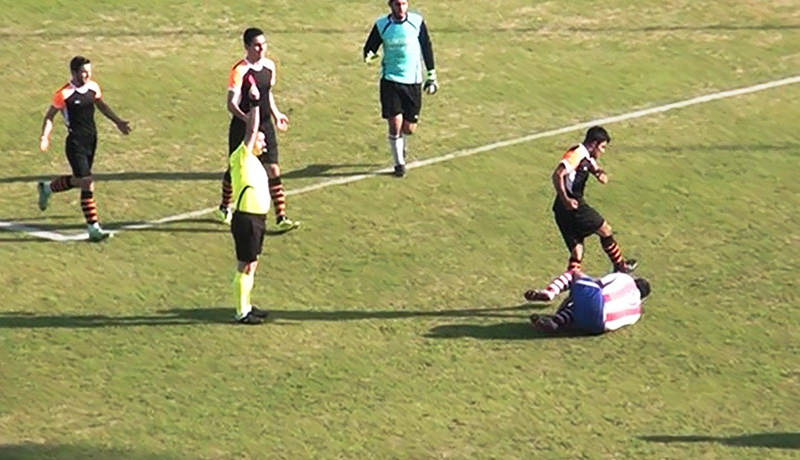 
A football player, angered by the referee's rightful red card decision following a deliberate tackle aimed at his opponent's leg, kicked his opponent right in the face before heading off to the changing rooms.

The shocking move came in an amateur football match between Dallıcaspor and Sanayispor football clubs playing in the Nazilli district of Turkey's western Aydın province on Sunday. Sanayispor player Mehmet Değirmenci deliberately tackled his opponent Kayhan Karakaş from Dallıcaspor after a strong shoulder charge. As his action received a red card from the referee, the player turned back to his opponent, already lying on the ground with pain, and kicked him in the face.

Dallıcaspor players walked up to Değirmenci, who was escorted out of the pitch by a trainer, probably saving him from being lynched by fans of Dallıcaspor.

As the incident drew huge reaction, Sanayispor released a written statement apologizing from Dallıcaspor, Karakaş, and the whole Turkish sports community, saying that Değirmenci was fired from the team.

After the game, Karakaş told the press that he blacked out due to the kick, and he could have died. He pressed charges against Değirmenci for 'attempted manslaughter'.

However, scandals of the match did not end with Değirmenci's kick as Karakaş was allowed to return to the match after a brief tampon and ice treatment. Due to dizziness and nausea, Karakaş fell to the ground. He was transferred to hospital but first had to wait for an ambulance which was not present during the match despite numerous applications to local sports authorities in previous matches.

"I continued playing for a while as I was playing in a team that we have established with great efforts. I did not want to leave my friends alone. I thought I could return to the match after a tampon and ice treatment," Karakaş said. Karakaş received nine stitches in his lip at the hospital.

"Thank god that kick came near my jaw. If it had hit me directly in the face, it could have broken my nose, made me blind or break my neck," Karakaş said, adding that he has been suffering from serious neck pain and hasn't been able to sleep for the last two days.

Speaking to the press after the incident, Değirmenci claimed that Karakaş cursed at his late mother during the charge and he could not control himself after the red card.
Last Update: Dec 22, 2015 5:32 pm