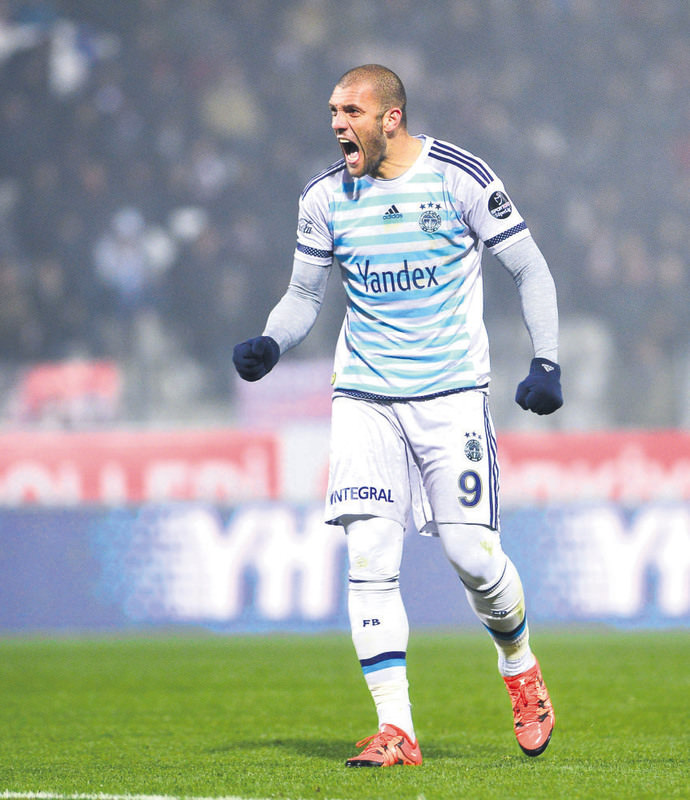 As New Year approaches, the race at the top of the Super League is proving to be a hard-fought one with Istanbul rivals Beşiktaş and Fenerbahçe just a point apart

Beşiktaş regained their throne at the top of the Spor Toto Super League, which was taken over by Fenerbahçe on Saturday, after they beat Osmanlıspor 3-1. After they stunned one of their biggest rivals Galatasaray 2-1 last week, Beşiktaş managed to clear one more difficult hurdle in the hard-fought championship race, beating Osmanlıspor 3-2 despite being behind to their rivals twice during the match. Beşiktaş's goals were scored by Mario Gomez in the 34th minute and Jose Sosa in the 49th and 90th minutes. Osmanlıspor's goals were scored by Raul Rusescu in the 21st minute and Badou Ndiyae in the 44th minute.

Beşiktaş coach Şenol Güneş was upset with Galatasaray's coach Mustafa Denizli, who complained about the referees after the derby match between Galatasaray and Beşiktaş saying "the referees chopped up us," believing they were biased against Galatasaray. Güneş said, "I don't know to whom the referees chopped up or not. If I talked in that way, it wouldn't be right. It is important to win. But what's more important is to play good football. It requires a good field. It's a shame. The ground on which we played was terrible. It is a shame to allow football to be played on this ground."

Beşiktaş's Argentine star Jose Sosa has been putting in great performances this season in away matches. He has scored all of his four goals in 18 official matches in away matches. Sosa scored his first goal against Albanian team Skenderbeu in an away match in the UEFA Europa League. He scored the three other goals in the Super League against Torku Konyaspor, Çaykur Rizespor and Kasımpaşa. Beşiktaş have won six of the seven matches in which Sosa has found the net in the last two seasons. He also scored consecutively on Dec. 21 this year and last year.

Beşiktaş have taken back their throne after the win, with 38 points. Second-placed Fenerbahçe have 37 points. The third of the "Big Three", Galatasaray, sit in third place and are nine points adrift of Beşiktaş following defeat by their Istanbul rivals last week. They hosted Akhisar Belediyespor at the Türk Telekom Arena on Sunday. The Lions got over the derby loss against Spor Toto Super league title contenders Beşiktaş last week with a victory against Akhisar Belediyespor 3-2. Galatasaray's offensive line was on form against Akhisar, with Turkish striker Umut Bulut, German forward Lukas Podolski and Turkish winger Yasin Öztekin scoring for the Istanbul team. Visitors Akhisar Belediyespor's goals were scored by Cameroonian midfielder Landry N'Guemo and Colombian striker Hugo Rodallega. After the narrow home win, Galatasaray, who raised their points to 29, climbed to the third spot in the league table.

Meanwhile, another member of the "Big Three," Fenerbahçe won against Gençlerbirliği 1-0 away in the capital Ankara. Brazilian striker Fernandao's goal in the first half won the gmae for Fenerbahce at the 19 Mayıs Stadium.

A glut of foreign players were shown red and yellow cards in the 16th week of the Sport Toto Super League. In eight matches, four red cards were handed out, all of them being given to foreign players. Seven foreign footballers were shown their fourth yellow card and will miss next week's matches. On the plus side, they are able to go on vacation early for Christmas before the end of the first half of the season. Çaykur Rizespor's Leonard Kweuke, Bursaspor's Balazs Dzsudzsak, Prejuce Nakoulma, Alexandar Mitrovic and Gökçek Vederson from Mersin İdmanyurdu, Vasil Bozhikov and Ryan Donk from Kasımpaşaspor, Samba Sow from Kayserispor Ondrej Celustka from Antalyaspor, Luis Nani and Fernandao from Fenerbahçe were among the players that will enjoy an early Christmas.
Last Update: Dec 23, 2015 1:42 am
RELATED TOPICS