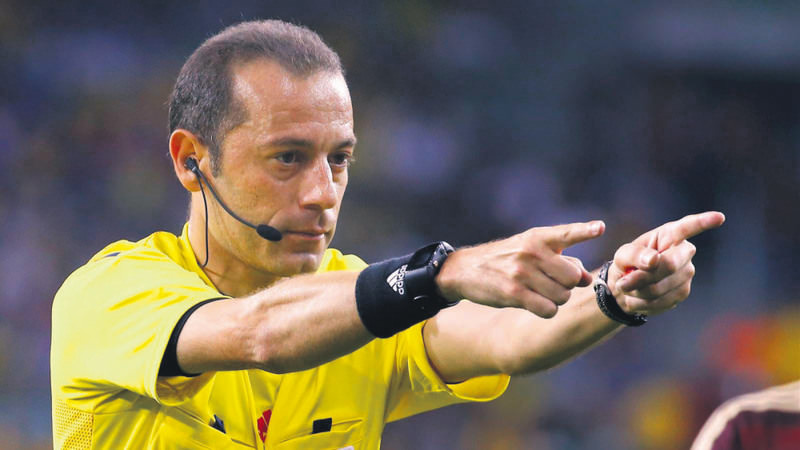 by daily sabah Jan 06, 2016 12:00 am
Selected editorial offices and experts from 50 countries around the world took part in the 2015 annual election of the world's top referee this week, the 29th time it has been carried out by the International Federation of Football History and Statistics (IFFHS). Cüneyt Çakır was selected as third best referee in 2015. For three years, Nicola Rizzoli, who is today 44 years old, has dominated the rankings of the World's Best Referee. Second in 2013 behind the double winner of the award, Englishman Howard Webb (2010 and 2013), the Italian referee won in 2014 and again in 2015.

Rizzoli began his senior career in 2002, became an international in 2007 and made the jump into the Top World Referees in 2013. Last year, he had 53 points more than second place, but this year, his margin was small with two strong concurrents, the English referee Martin Atkinson and the Turkish referee Cüneyt Çakır. Rizzoli (80 points) had only eight points more than Atkinson and nine more than Çakır. With the German Felix Briych, in fourth place, they have dominated the year 2015 with clear-sighted performances. Bjorn Kuipers confirmed his place in the top five, while Marc Clattenburg made his entry in the ranking for the first time. South America also had a new entry, with Wilmar Roldan from Colombia, and Australia's Ben Williams entered the top 10.
RELATED TOPICS