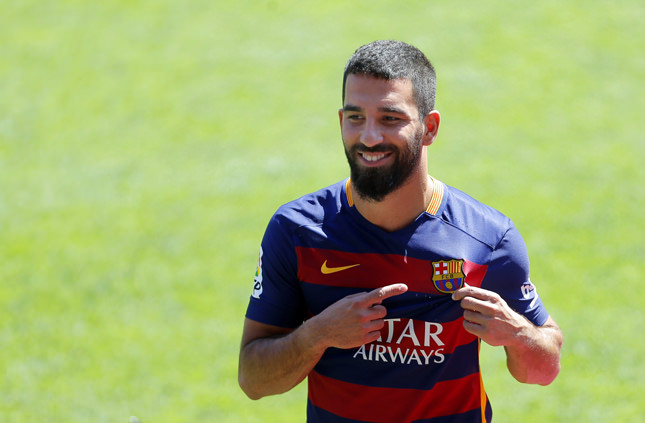 by Associated Press Jan 06, 2016 12:00 am
The moment has finally arrived for Arda Turan and Aleix Vidal will get their chance to play for Barcelona.

The two have been announced in the starting line-up for Barcelona on Wednesday after the club finished its one-year ban on new players. They will make their debuts when Barcelona hosts Espanyol in the first leg of the Copa del Rey on Wednesday, only four days after their crosstown rivals held them to a 0-0 draw in the Spanish league.

"Both will participate tomorrow," Barcelona coach Luis Enrique said Tuesday. "I don't know how many minutes each will play, but they will be able to wear the Barcelona shirt."

Despite being prohibited from signing new players by FIFA during 2015 for breaking rules regarding the transfer of underage players to its youth teams, Barcelona was able to secure deals with Atletico Madrid for Turan and with Sevilla for Vidal last summer.

Turan has only played two competitive matches for Turkey over the first half of this season, while Vidal has been limited to a friendly with Catalonia's regional selection.

Turan will help bulk up Barcelona's midfield and share playing time with Andres Iniesta, Ivan Rakitic and Sergi Roberto. The versatile Vidal can play at either right back or winger.

With Real Madrid disqualified from the cup for fielding the ineligible Denis Cheryshev in its opening match against third-division club Cadiz, Barcelona's biggest rival to defending its title is Atletico Madrid.

Here are some things to know about this week's Copa del Rey matches:

Espanyol relishes its role as the Catalan capital's underdog, lagging far behind Barcelona in star power and financial resources.

That's why its players and fans celebrated Saturday's stalemate with the European champions like a victory.

Barcelona will be seeking a commanding win at home before returning to Espanyol's ground next week for the return leg.

"My players are extremely motivated to play," Luis Enrique said.

Atletico also faces a city rival when it visits Rayo Vallecano on Wednesday.

Atletico has taken the provisional lead of the Spanish league, and has a deep squad that coach Diego Simeone will likely use to rest some of his top players.

Rayo is at a low point after coach Paco Jemez said his squad "was not a first-division team" following a seventh Spanish league game without a win over the weekend.

This round also features the always intense Seville derby between Real Betis and Sevilla.

A little over two weeks ago, the rivals sealed a 0-0 draw in the league in a testy match that saw far more fouls than scoring chances.