Turan makes his debut for Barca 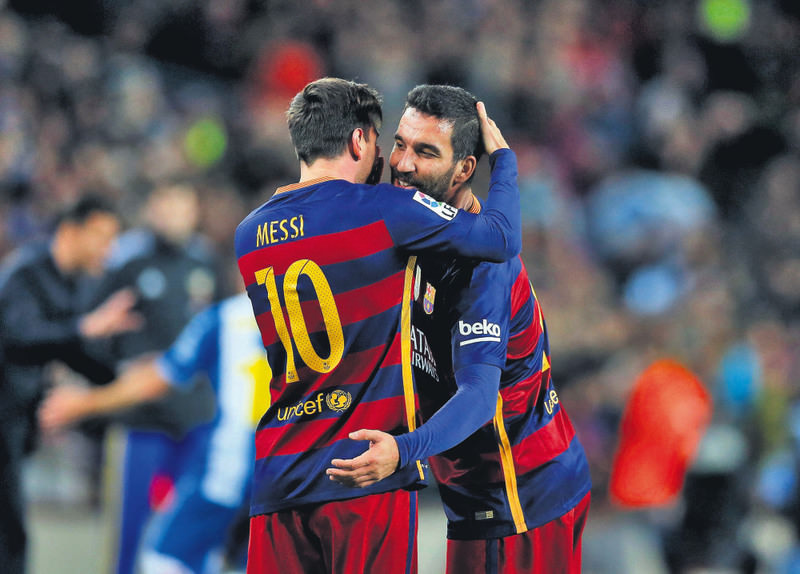 Arda Turan and Aleix Vidal, used as a substitute, debuted for Barcelona after the club's ban on fielding new players ended. ‘I liked both Arda and Aleix ,' Luis Enrique said of the two debutants after the match

After a wait of five months due to a FIFA ban, Arda Turan and Aleix Vidal's long-awaited Barcelona debut arrived in the first leg of the Copa del Rey last 16 tie against Espanyol on Wednesday.

Turan was included in the starting line up by coach Luis Enrique for the game at Camp Nou and played 67 minutes before being replaced by Ivan Rakitic. Aleix Vidal began the match on the bench, finally making an appearance in the 68th minute, coming on to replace Dani Alves. Both players played their part in the excellent 4-1 win with Leo Messi the star of the show. The Argentine scored twice and created goals for Gerard Pique and Neymar to give Turan, Aleix Vidal and the rest of his team-mates an excellent chance of making it to the quarter-finals with the second leg to come against Espanyol next Wednesday.

Arda Turan had played his last match in Spain in an Atletico Madrid shirt against Barcelona on May 17, 2015. And nearly eight months later he came back to the pitch with a Barcelona shirt on him this time. The Spanish media said, "There wasn't the best Arda Turan on the pitch. But this is expected because he wasn't able to play for a long time. He helped the defense more than the forward line. He showed himself more in the second half."

"I liked both Arda and Aleix (Vidal)," Luis Enrique said of the two debutants after the match. "Arda adds dribbling, vision, solutions. Aleix didn't play a lot, but he did well."

Arda Turan said after the match "That was a joyful night for me that made me proud." He also tweeted "Proud to be a member."

Pique also praised the new debutants saying, "I think Arda and Aleix were quite good considering they could not play for months. They will contribute a lot to the rest of the season."

Arda Turan was bought by Barcelona on July 6, but has had to sit out due to the club's transfer ban. Luis Enrique surprised some by handing a start to Turan in a mouth-watering midfield alongside Sergio Busquets and Andres Iniesta with Lionel Messi, Luis Suarez and Neymar in front of him.

An intense derby clash against a physical Espanyol side was never going to be the easiest of debuts for a player who was virtually without competitive football - aside from international appearances - since the summer. But Turan started brightly as he linked up well with his team-mates in the early stages and came close to an opportunity on goal as Pau Lopez nicked the ball from his feet in the area.

The 28-year-old popped up all over the midfield and made some clever runs further forward, almost scoring a debut goal in the second half as his angled drive was parried by Lopez. Generally, he participated in Barca's best passing moves, although he will look for an improved understanding with his team-mates in the future. Early signs, however, were positive.

Turan played 68 minutes in total and needs more to step up his overall match fitness and conditioning. In his time on the pitch, the Turkish international attempted 43 passes and completed 35 at a ratio of 81.4 percent.

That was lower than the rest of the starting XI against Espanyol and he did give the ball away more than would be expected, but the stat does not take into account the difficulty involved in making a pass.

Arda is not known necessarily for his defensive contributions but he worked hard and made four tackles, as well as going in for 16 challenges. He also lost the ball 12 times, a number that seems high but is in fact lower than Messi, Neymar and Suarez. He also regained possession five times and won three free-kicks.

Meanwhile, the referee's report mentioned a heated exchange between opposing players after the match. Espanyol's Gerard Moreno said some Barcelona players "were waiting for them" and "provoked" him and his team-mates.

"There was tension and intensity," Barcelona coach Luis Enrique said. "The referees mark the limits, not the players or the coaches. They are the ones charged with ensuring this is soccer and not American football."
Last Update: Jan 08, 2016 11:50 am
RELATED TOPICS