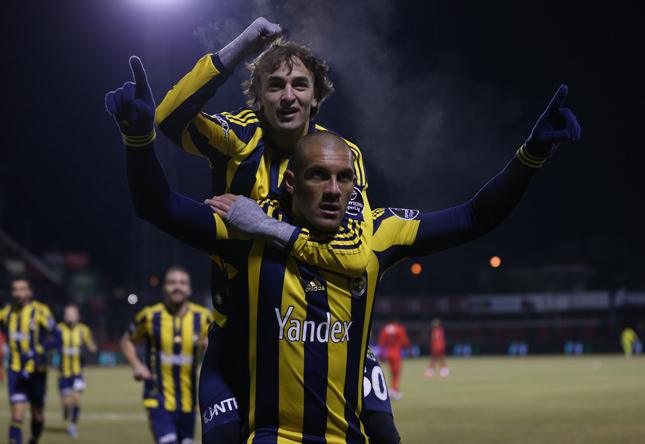 In the first match of the Süper Lig's second half in Eskişehir on Monday, the visitors' offense was on call as Brazilian striker Fernandao scored twice and Dutch star forward Robin van Persie also contributed a goal.

Eskişehirspor midfielder Alparslan Öztürk was sent off in the 64th minute.

With 43 points on Week 18, Fenerbahçe claimed the top spot in the league as Besiktaş's Sunday match against Mersin İdmanyurdu was postponed due to heavy snow.

Meanwhile Galatasaray won against Medicana Sivasspor 3-1 at home. Galatasaray's Turkish midfielder Selçuk İnan scored on a penalty. Turkish-German forward Sinan Gümüş doubled the score near the end of the first half. In the 68th minute, forward David Texeira narrowed the gap. But to no avail as the Istanbul team scored thanks to another penalty converted by Turkish striker Burak Yılmaz in the 86th minute.
Last Update: Jan 19, 2016 1:10 pm
RELATED TOPICS