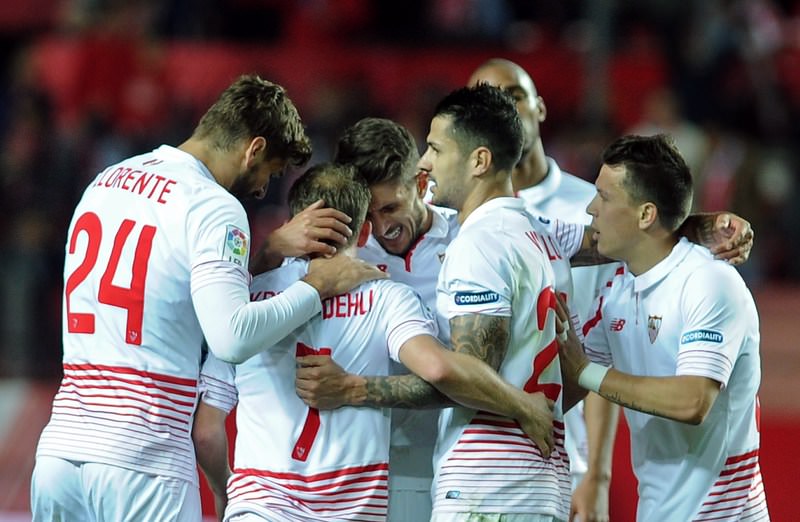 by Feb 05, 2016 12:00 am
Sevilla are well placed to reach the Spanish Cup final for the first time since 2010 after trouncing Celta Vigo 4-0 Thursday in an eventful semi-final first leg in which Sevilla's Kevin Gameiro went from villain to hero.

The French striker had a penalty well saved by Celta keeper Ruben Blanco in the 28th minute but fully made amends on the hour with two goals within two minute - on both occasions latching on to long balls and finishing with quality and composure.

Defender Adil Rami gave Sevilla the lead just before half-time by heading in a corner.

Veteran Michael Krohn-Dehli calmly completed the rout three minutes from time after Celta defender Jonny inexplicably failed to cut out yet another long pass from the back.

"We were very sharp in front of goal tonight," Sevilla midfielder Vitolo said. "We didn't carve out too many openings, but the important thing is that we converted four precious goals.

"However, the tie is not over yet. Celta are a good team and are bound to create problems for us next week."

Celta created several good openings of their own but were badly let down by a lack of punch in attack - and by a lack of solidity in defence.

"We were very poor in both penalty areas, it has to be said," Celta's Fabian Orellana said.

"It will be very hard for us now to save this tie after what happened tonight, but we will certainly try to."

Orellana and company now have a veritable mountain to climb in the second leg in Vigo on February 11.

Even better placed for the final than Sevilla are Barcelona, who slaughtered dismal Valencia 7-0 Wednesday, with four goals from Luis Suarez and a hat-trick from Lionel Messi.
Last Update: Feb 05, 2016 2:08 am
RELATED TOPICS