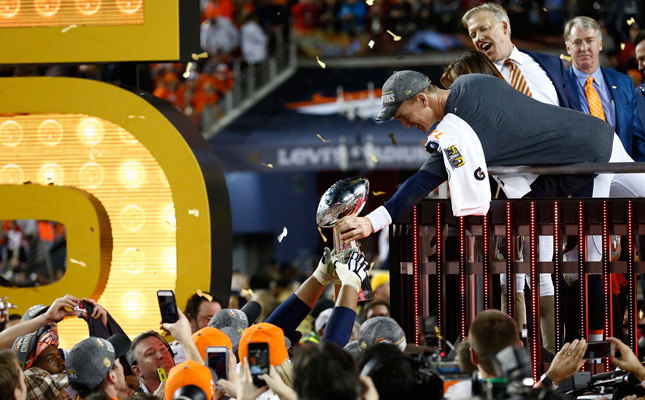 A close second is that he never has to lace 'em up again. Probably.

Constantly harassed, never quite comfortable, Manning walked away with his second Super Bowl title Sunday, thanks chiefly to Denver's defense in a 24-10 victory over the Carolina Panthers.

Manning wouldn't budge on whether this was, in fact, his last game.

"I got some good advice from Tony Dungy," Manning said of the first of four coaches with whom he's been to the Super Bowl. "He said, 'Don't make an emotional decision.' This has been an emotional week, an emotional night. I'm going to take some time to reflect."

On Sunday, he looked all of his 39 years and more. He was creaky, off-target at times. He got bamboozled into his first interception of this year's playoffs and could've thrown a few more had the Panthers' defenders had better hands. Manning lost a fumble, as well.

His most important throw might have been the pass that flew 10 yards out of the end zone but drew a defensive holding call that set up the game-clinching touchdown. On the positive side, he completed 13 passes for 141 yards and got the Broncos moving to start both halves.

Those small wisps of offense set up a few field goals, kept the Broncos in good field position then allowed the defense to maintain the lead by making seven sacks and four turnovers.

He's been taking it week by week this year, insisting he's not thinking about what he'll do after the season. Now that it's over, he'll have to decide whether he wants to walk away on top same as his boss, John Elway, did after he won his second title back in 1999.

"He's gone through a tough year with all the injuries and the other things that have gone on," Broncos receiver Demaryius Thomas said.

Manning spent the first three years with Denver rewriting the record book. But this year, he missed six games with an injured foot, then came back as a diminished game manager.

On Sunday he had a modest passer rating of 56.6 that wasn't that much lower than what he compiled this season.

He won by handing off a lot. The Broncos ran 28 times, including on third-and-9 late in this game while nursing a lead. That never would have happened in earlier in his 18-year career. Denver's 11 first downs were the same as Manning would've racked up in a quarter a few years back.

"This game was much like the season has been," Manning said. "It tested our toughness, our resilience, our unselfishness."

"I'm so proud of my guys," Miller said, clutching the silver Lombardi Trophy. "It's been every last one of you guys in the locker room that's gotten us to this moment right here."

Miller created Denver's first touchdown by zooming past the right tackle and breaking in on Newton to rip the football away from the QB, who was honored as the regular-season MVP.

The fumble bounced into the end zone, where defensive end Malik Jackson landed on it to put the Broncos up 10-0 about 8 1/2 minutes into the game.

"We got in (Newton's) head after that. We got in his mind. Because he hasn't been harassed like that all season," Marshall said.

Then, pounding his right fist in his left palm, Marshall added: "That play rattled him. That did it."

With 4 minutes remaining in the fourth quarter, Miller set up Denver's only offensive touchdown. Again, he got past the right tackle and reached out to grab Newton's right arm in the throwing motion to force a fumble.

The ball was eventually recovered by safety T.J. Ward at the Carolina 4-yar line, and soon thereafter, C.J. Anderson's 2-yard run sealed the victory for Denver.

Earlier, Miller laid a big hit on Newton near the sideline. He also shared a third-down sack with Derek Wolfe to get Denver the ball back at the end of the third quarter.

And, showing his versatility, Miller even made plays in pass coverage, dropping back to force an incompletion from Newton to Jerricho Cotchery at one point.

It was all part of quite a display by Miller and the rest of Denver's defense, making the NFC champion Panthers and their No. 1-ranked offense look poor.

Thanks to Miller and Co., Peyton Manning did not need to do much with Denver's offense: The Broncos' 194 total yards were the fewest ever for a Super Bowl winner.

Denver's defense wound up with a Super Bowl record-tying seven sacks, showing off the rush that led the NFL with 52 sacks this season.

Two years ago Denver got walloped 43-8 in the Super Bowl by Seattle, owners of the league's best defense. General manager John Elway set out to build the Broncos' defense, adding players such as DeMarcus Ware, T.J. Ward and Aqib Talib.

But Miller, who missed that loss to Seattle because of a knee injury, already was in place, set to pair with Ware as a dangerous duo.

Now comes the offseason and contract negotiations for Miller, someone the Broncos would love to lock up for the long term.
Last Update: Feb 08, 2016 11:34 am
RELATED TOPICS