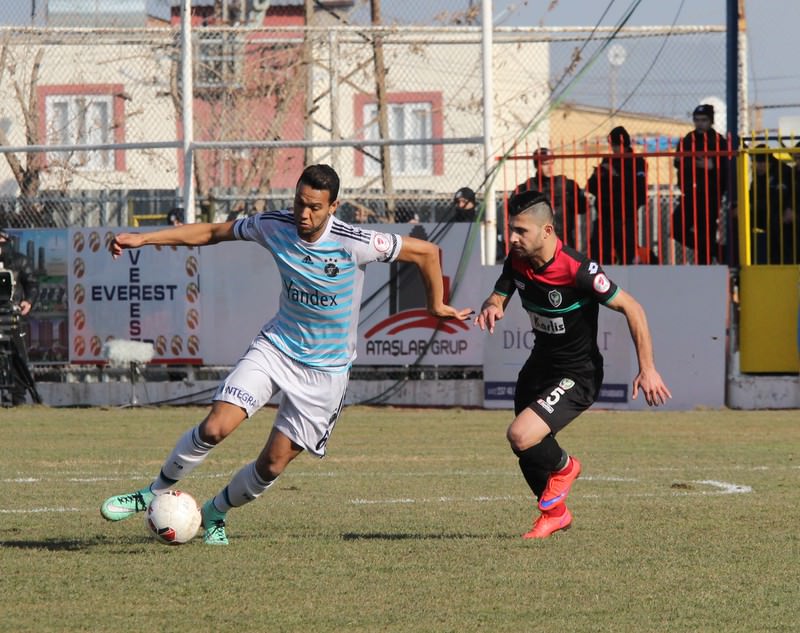 With a lineup missing key players, Fenerbahçe Tuesday ended up with a 3-3 draw in the Ziraat Cup quarter-final against Amed Sportif Faaliyetler, a small team from the southeast that faced fines over terror propaganda

The Yellow Canaries of Fenerbahçe, in an away game in Diyarbakır, a city rocked by constant terror attacks, snatched a 3-3 draw in the Ziraat Cup quarter-final Tuesday with Amed Sportif Faaliyetler.

Despite a lineup whose net worth is less than 1 percent of Fenerbahçe's budget, Amed shone in the home game minus the advantage of spectators. The Turkish Football Federation has ordered a spectator ban on the team as well as a 12-match ban for the team's Deniz Naki over his "ideological remarks" in reference to the team's support for militants linked to the PKK terrorist organization.

Amid tight security measures, Fenerbahçe entered the stadium while riot police dispersed a group of Amed fans that had converged around the stadium. Instead of missing spectators, Amed Sportif placed an enormous photo of spectators from past matches on the grandstand. As the match kicked off, Amed opted to not playing for about one minute in protest while the Fener players in response sent the ball out to touch.

As fighter jets roared above and security forces were patrolling elsewhere in the city against potential terror attacks that have long gripped the city, Fenerbahçe were in awe of theirs rivals, who scored its first goal in the 10th minute. Şehmus's elegant strike with an assist from Sercan Özçelik caught Fener goalkeeper Fabiano off-guard. Nevertheless, Fener recovered with a goal by Ramazan Civelek only four minutes later as the 20-year-old midfielder wrapped up Vaclav Kadlec and Diego's efforts near the goalpost with a hard shot. Fener's Brazilian midfielder Diego missed a chance minutes later to score Fener's second goal but Fernandao put his team ahead in the 44th minute with a header.

Amed Sportif secured its first draw with Ibrahim Ferdi lobbing the ball to the right of Fabiano as Yusuf Yağmar tricked the Fener defense with a back-heeled shot in the 68th minute. Yusuf himself scored Amed's third goal two minutes later.

Fenerbahçe responded through Volkan Şen in the 76th minute. With a long pass from Raul Meireles, Şen tackled Sercan before he squared off with Amed's Levent Taşkın and earned the draw for the Yellow Canaries.

Amedspor has made a name for itself by challenging prestigious Super League rivals. It rose to the quarter-finals after defeating Super League outfit Bursaspor 2-1.

Fener and Amed will have a rematch in Istanbul in the first week of March.

The match is just another challenge for Fenerbahçe as they compete for local and international titles. Though the Ziraat Cup is less prestigious than other national competitions and brings together teams both from the first and second leagues like Amed, the Istanbul-based club is still eager to take another cup into its trophy room.

The Yellow Canaries had no trouble securing five wins and one draw but it had a hard time in the last 16 of the competition. Diego's single goal against Kayserispor in extra time last month helped the team get to the quarter-final against Amed, a surprise rival for the team accustomed to squaring off against better-known rivals. Amed Sportif is in eighth spot in the Spor Toto Second League Red Group with 27 points while Fenerbahçe tops the Spor Toto Super League with 46 points, equal on wins with Beşiktaş but ahead by virtue of having lost less.
RELATED TOPICS