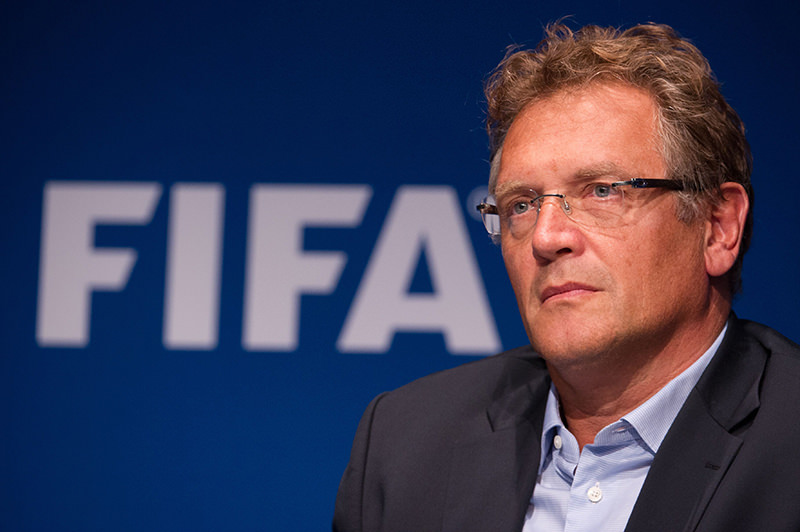 FIFA secretary general Jerome Valcke attending a press conference at the FIFA headquarters in Zurich, on October 21, 2011. (AFP Photo)
by Associated Press Feb 12, 2016 12:00 am
Jerome Valcke, Sepp Blatter's long-time right-hand man, was banned from all soccer-related activity for 12 years Friday for misconduct during his term as FIFA secretary general.

Valcke was found guilty by FIFA's ethics committee of wide-ranging offenses, including taking private jets for personal use, destroying evidence and trying to force through an undervalued sale of 2018 and 2022 World Cup television rights for the Caribbean.

"Mr. Valcke acted against FIFA's best interests and caused considerable financial damage to FIFA, while his private and personal interests detracted him from his ability to properly perform his duties," the ethics committee said in a statement.

Valcke's ban is four years longer than the eight-year sanctions handed down to FIFA President Blatter and UEFA President Michel Platini in December for a financial conflict of interest.

The ethics judges said Valcke violated seven sections of FIFA's code of ethics, compared to four each by Blatter and Platini, and also fined him 100,000 Swiss francs ($102,500).

The ban comes one month after the 55-year-old Frenchman was fired by FIFA for a second time in a colorful career. The former television presenter and marketing executive had been suspended last September. The firing was based on an internal report about his conduct, including use of expenses and private jets.

FIFA commissioned that report last year before a 2014 World Cup ticket agent alleged that Valcke sought to profit from a black market deal which later fell through. That allegation, made by ticket agent Benny Alon, prompted Valcke's suspension and the ethics case to be opened.

"During the course of the investigations, several other acts of potential misconduct arose," the ethics judges said.

"By travelling at FIFA's expense purely for sightseeing reasons as well as repeatedly choosing private flights for his trips over commercial flights without any business rationale for doing so, Mr. Valcke gained an advantage for himself and relatives," the statement said.

"It was found that Mr. Valcke attempted to grant the TV and media rights for the 2018 and 2022 FIFA World Cups to a third party for a fee far below their actual market value and had taken concrete preparatory action in this regard.'

The ethics panel added: "Mr. Valcke deliberately tried to obstruct the ongoing proceedings against him by attempting to delete or deleting several files and folders relevant to the investigation."

"Jerome Valcke is proud of all that was accomplished for the game of football during his long tenure as secretary general, including two of the most successful World Cups in history in South Africa and Brazil," his U.S.-based lawyers said last month when he was fired.

Valcke was picked by Blatter as secretary general in 2007, months after being fired for misconduct in sponsorship negotiations.

A civil suit brought by Mastercard — which was ousted as a World Cup sponsor when FIFA signed instead with Visa — cost the scandal-hit soccer body $90 million to settle in 2006.
Last Update: Feb 12, 2016 6:13 pm
RELATED TOPICS