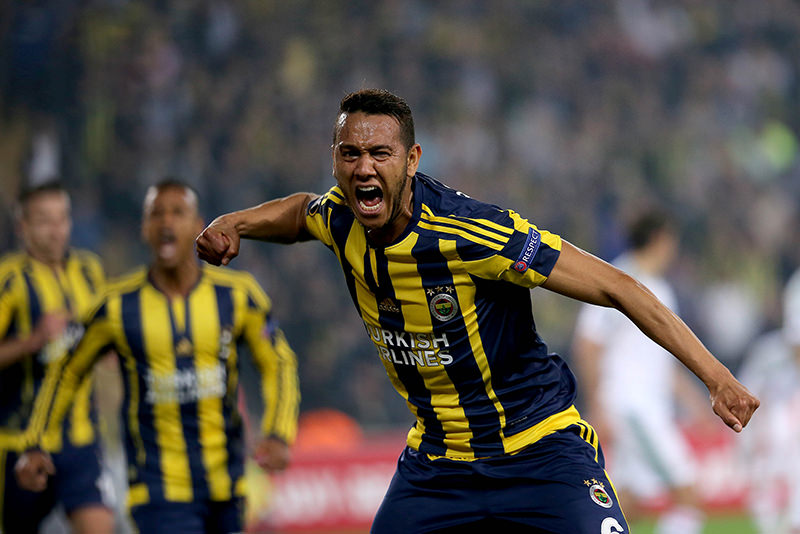 
Fenerbahçe took an early lead against Moscow with a Souza goal in the 18th minute of the match, with a swift delivery from right-back Gökhan Gönül.

Souza set the course for the rest of the match as he scored another in the 72nd minute, dominating the game for Fenerbahçe.

The Brazilian midifelder this time was assisted by Caner Erkin.

The Yellow Canaries welcomed The Railwaymen to Istanbul for the critical match.

The second leg will be played at Stadion Lokomotiv in Moscow on Feb. 25.

Currently sitting at top of the Turkish Super League with an eight game winning streak, Fenerbahçe had qualified for the group stages after coming second in Group A.

Lokomotiv Moscow had qualified for the knockout rounds after winning in Group H with just one loss. The Russian team is currently in third place as the Premier League goes into its mid-season break.

Lokomotiv's Portuguese midfielder Manuel Fernandes played for Fenerbahçe's city rivals Beşiktaş from 2011 to 2014. He and Fenerbahçe's Mehmet Topal were team-mates at Valencia CF from 2010 to 2011.

Fenerbahçe center-back Bruno Alves played in Russia for FC Zenit from 2010 to 2013; fellow defender Caner Erkin was at PFC CSKA Moskva from 2007 to 2010. Lokomotiv's Vedran Corluka played alongside Fenerbahçe's Michal Kadlec during a loan spell at Bayer 04 Leverkusen in the second half of the 2011/12 season. Fenerbahçe come into the first leg having played exactly 200 UEFA games with the record W71 D41 L88. Fenerbahçe coach since June, Portuguese technician Vitor Pereira was Andre Villas-Boas's assistant when FC Porto claimed the 2010/11 UEFA Europa League. He later won two league titles as the Dragons' coach and a domestic double in Greece with Olympiacos FC in 2014/15.
Last Update: Feb 17, 2016 10:11 am
RELATED TOPICS