Russia's Lokomotiv may be in trouble for player's Putin picture, slogan on shirt at match in Turkey 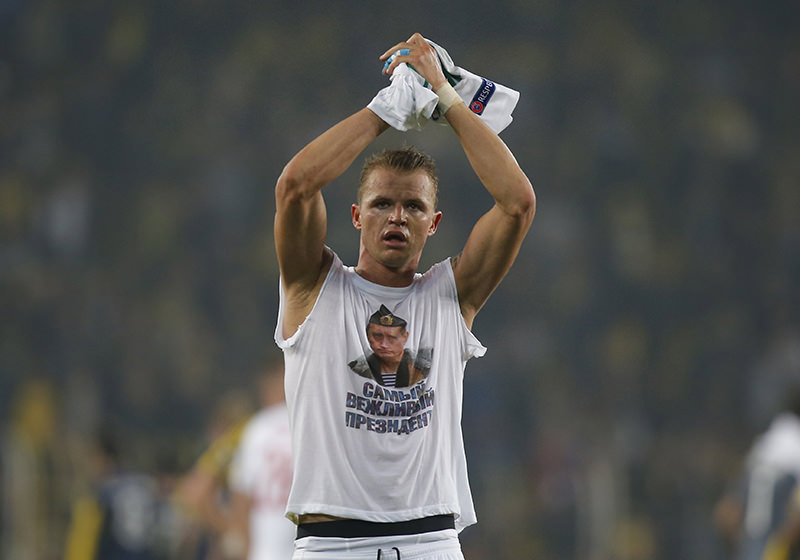 Locomotiv Moscow's Dmitri Tarasov features an inner shirt with a picture of Russian President Vladimir Putin and the slogan ,The most polite President,. (AP Photo)
by Daily Sabah with AP Feb 16, 2016 12:00 am
Lokomotiv Moscow is heading for trouble from European soccer's ruling body after one of its players pulled off his shirt following a politically-charged game against Turkey's Fenerbahçe to reveal a portrait of Vladimir Putin and a slogan supporting the Russian president.

Beneath the portrait of Putin, who is wearing a Russian military gear in the picture, the vest worn Tuesday by Lokomotiv's Dmitri Tarasov read: "The most polite president."

Tarasov later defended his behavior, telling Russian agency R-Sport: "It's my president. I respect him and decided to show that I'm always with him and prepared to give my support.

"What was written on that shirt was everything that I wanted to say."

Political statements are not allowed by UEFA at its competitions.

Late last year, UEFA rejected calls to separate Russia and Turkey in the draw for this summer's European Championship - and also the two countries' clubs in the Europa League draws.

Tuesday's first leg match was in the Europa League's Round of 32.

Lokomotiv lost the game 2-0 as Fenerbahçe's Josef de Souza led his team to victory with a goal in each half of the game.

Ties between Turkey and Russia have been tense since November 2015 when Turkey shot down a Russian Su-34 jet on Jan. 29 after it violated its border near Syria.