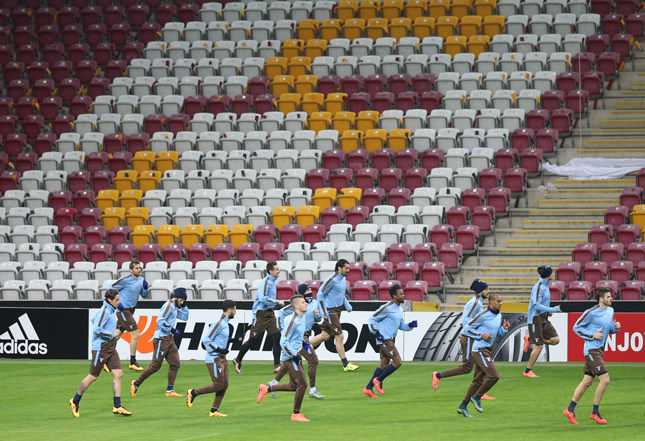 by Daily Sabah Feb 18, 2016 12:00 am
Galatasaray return to the Europa League for the first time in more than five years after they dropped down to the competition following their third place knockout from the Champions League.

The Istanbul giants will now host the Italian club Lazio in their home ground, the Türk Telekom Arena, late Thursday.

The first leg of the match, which will be refereed by Michael Oliver from England, will kick off at 10:05 p.m. Galatasaray's Turkish forward Sinan Gümüş, who sustained a major hamstring injury, will miss the match.

Lazio defensive regular Stefan Radu, who is suffering from a thigh injury, will also not play.

Having last played a Europa League match in August 2010, Galatasaray won the UEFA Cup on May 17, 2000, which is still considered as one of the greatest achievements in Turkish football.

The Lions lifted the trophy after beating London giants Arsenal on penalties in Copenhagen.

During the 2010-11 season, Galatasaray were eliminated by Ukraine's Karpaty Lviv in the Europa League play-off round.

In the 2011-12 season, the Turkish side did not play in any European challenge. In the last four seasons, the Istanbul giants have played in the Champions League.

Galatasaray are unbeaten at home against Italian opponents since January 1963 - when Milan triumphed 3-1 in Istanbul.

In the 2001/02 UEFA Champions League group stage, Mircea Lucescu's Galatasaray overcame Dino Zoff's Lazio 1-0 at home, but lost by the same scoreline in the reverse fixture to a Biancocelesti side coached by Alberto Zaccheroni.

They are undefeated in their last 10 home fixtures against Serie A visitors (W7 D3) since that Milan victory in the European Cup quarter-finals. Lazio's 12 matches against Turkish sides have ended W6 D4 L2 (W3 D3 L0 at home - W3 D1 L2 in Turkey).

Galatasaray's Uruguayan goalkeeper Fernando Muslera joined the club from Lazio in summer 2011, having won the Coppa Italia in 2008/09 and made 96 Serie A appearances.
Last Update: Feb 18, 2016 12:00 pm
RELATED TOPICS