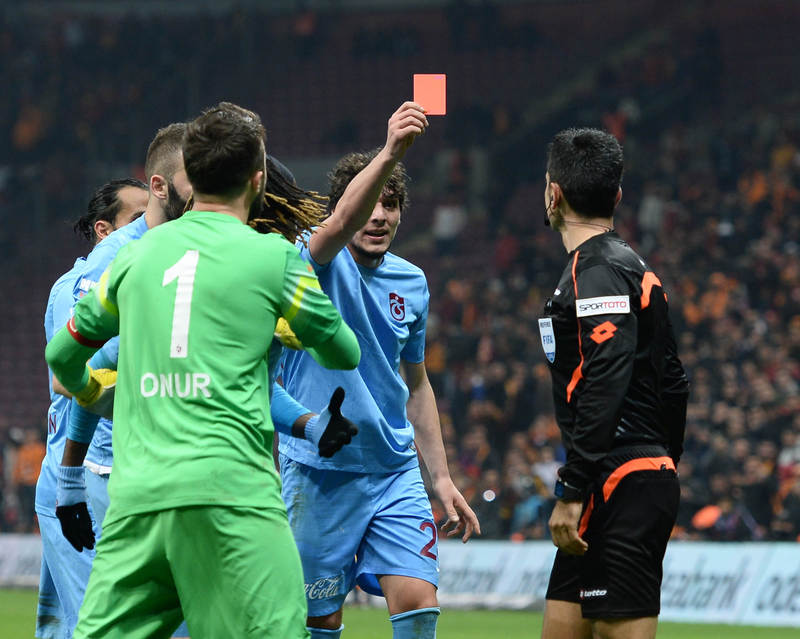 Refereeing decisions always create a stir in Turkish football. Referees are consistently targeted for their decisions and are often scapegoats for clubs and footballers who try to deflect negative attention away from themselves. Sunday night's Super League clash between Galatasaray and Trabzonspor marked a historic low.

Trabzonspor defender Salih Dursun was one of four players sent off by Deniz Ateş Bitnel in a feisty 2-1 defeat by Galatasaray in Istanbul. Dursun, enraged by the dismissal of team-mate Luis Pedro Cavanda, seized the opportunity to mock Bitnel by showing him the red card after it was dropped by the referee, before being sent off himself. The flare-up surrounded Bitnel's controversial decision to award an 86th-minute penalty with the score at 1-1, providing Selçuk İnan the chance to net the winner three minutes later.

Salih Dursun said after the match: "It was an injustice to play seven players against 12 players (meaning the referee was helping Galatasaray). I showed the red card to referee in order for Galatasaray to be 11 players."

Dursun's incident has gone viral all over the world. The world's media picked up the story of the Turkish footballer's reaction. Some newspapers cracked jokes about the incident. The Daily Mail wrote: "Paul Gascoigne can count himself lucky referee Dougie Smith only booked him for showing the official his own card back in 1995 - in Turkey, Salih Dursun's similar antics were deemed a red-card offence."

"The incident revived memories of Gascoigne's bizarre booking during Rangers' 7-0 rout of Hibernian back in 1995. Gazza returned referee Smith's yellow card after jokingly 'booking' the humor-lacking official – only to be cautioned, much to the disgust of the Ibrox crowd.

But while the former England international could laugh off the decision, Dursun was not so lucky as he was given his marching orders."

It may be a funny joke for the Daily Mail but it was definitely not funny for Trabzonspor fans. They have been in the media because of the club's reaction to unfavorable refereeing decisions. Supporters raided the Turkish Football Federation's regional branch on Sunday night and smashed its windows. The club was also upset, posting a message on Twitter reading: "'The black night of Turkish football," accompanied by an image of the Dursun incident.

Interestingly, Salih Dursun is a footballer who Galatasaray loaned to Trabzonspor. If Galatasaray want him back he may play at Galatasaray next year. The last minutes of the match were particularly frantic in an already memorable encounter. Players deliberately stopped playing as they simply stayed in their half. The Galatasaray players also stopped playing and passed the ball among themselves until the referee whistled for full time. And the referee Bitnel didn't wait for time to elapse, finishing the match with half a minute to go.

Trabzonspor President Muharrem Usta made harsh statements after the match, pointing a finger at the Turkish Football Federation. "Who do you want to save? This system has to end. Maybe we should be happy because after tonight somethings may change in Turkish football."

"There are messages from all over Turkey, saying 'we are ashamed'."

The incident was widely mentioned and commented on among sports writers and commentators. A Turkish commentator, Mehmet Demirkol said, "I wish the referee a quick recovery. He has to be examined."

Another commentator and former footballer Metin Tekin said, " Galatasaray's coach Mustafa Denizli said he did not see the incident. I'm surprised actually he had seen a lot of positions to the detriment of his own team."

"A card that was 100 percent right," headlined the Fanatik sports daily above a picture of Dursun showing the red card and listing six major errors the referee made in the game.

Far from sanctioning Dursun, Trabzonspor announced the club started printing T-shirts showing Dursun make the already iconic gesture for sale in the official shop. The team was given a hero's welcome by fans when they flew back to Trabzon after the away clash in Istanbul.

Salih Dursun received support from other clubs. Bursaspor tweeted, "He is our child too. He is not only a symbol of Trabzonspor but also ours." Also a street in Yomra, Trabzonspor's district, will be named after Salih Dursun.

This is not the first time that Trabzonspor have gotten into trouble over a referee. The club's chairman, İbrahim Hacıosmanoğlu, was handed a 280-day ban in November after locking four match officials in the stadium overnight for failing to award his team a penalty.

Turkish football has seen a huge influx of foreign talent in the last years and the game saw Netherlands star Wesley Sneijder and Germany's Lukas Podolski turning out for Galatasaray.

But the sport in Turkey remains shadowed by the sometimes appalling refereeing, low attendances, the shadow of a 2011 match-fixing scandal and the failure to make any impact in the Champions League.
Last Update: Feb 22, 2016 3:26 pm
RELATED TOPICS