Fenerbahçe continue to march on unbeaten in Europe 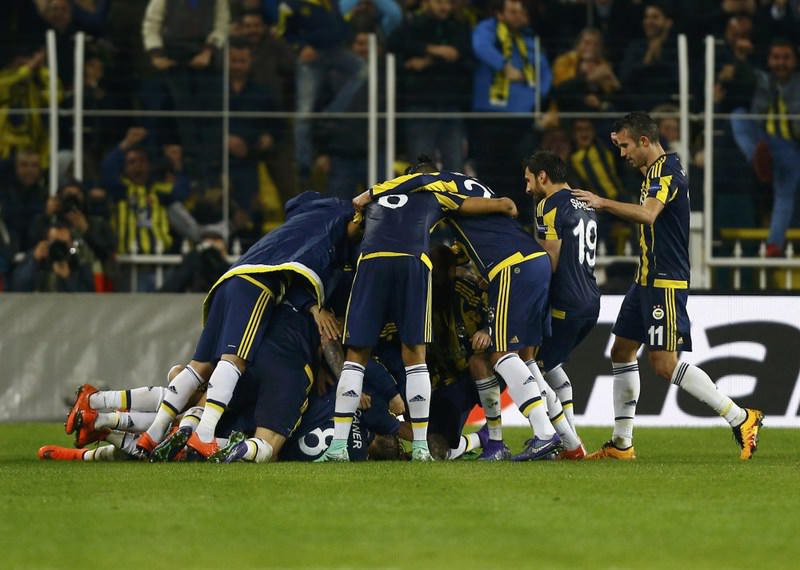 The Super League leaders racked up a 12th straight home win, against Braga. Fenerbahçe are now eight games unbeaten in the competition

Mehmet Topal once again came to the fore when Fenerbahçe needed him most in the UEFA Europa League as his late header earned a narrow first-leg win at home to Braga in the round of 16 on Thursday.

It was always going to be a tight game between the two cautious sides: Fenerbahçe have conceded only twice in their last six UEFA Europa League matches; Braga's four away fixtures in the tournament before Thursday's game had witnessed just five goals. It was Topal's header that gave Fenerbahçe a 12th successive home win and a crucial lead in this tie.

Robin Van Persie is yet to score in the UEFA Europa League and Fernandao, Fenerbahçe's leading marksman, was on the bench all night. So it again came down to a midfielder to score. Six of the club's last seven goals in the competition have come from defensive players: Mehmet, Souza (twice), and Lazar Markovic and Ozan Tufan.

Volkan Demirel, Fenerbahçe's long-standing goalkeeper, has watched much of this season's UEFA Europa League from the bench, with Fabiano preferred. Surprisingly, Demirel was called upon on Thursday tonight and duly delivered, showing great confidence whenever Braga threatened on the break. He ensured that Fener did not concede a goal for the fifth time in six European matches. Fenerbahçe have conceded just two goals in their last eight European matches.

Fenerbahçe head coach Vitor Pereira said: "Braga have not been defeated in 15 games. So I want to remind you, we are really a team of high quality, no doubt about that. The match to be played in Portugal will be very difficult. I trust my team individually and collectively. I'm very happy with my team's performance."

Elsewhere, in early final of the tournament, a dominant Liverpool were worthy 2-0 winners over Manchester United as the old foes met in Europe for the first time on Thursday.

Jurgen Klopp's side will go to Old Trafford for the second leg next Thursday in a good position to advance to the quarter-finals, although that United retain any hope is largely down to David de Gea.

Earlier, a brilliant Dortmund brushed aside a Tottenham side not helped by coach Mauricio Pochettino's decision to rotate his squad. For his 100th game in charge, Pochettino made seven changes to the team that drew 2-2 with Arsenal last weekend with Harry Kane among those left on the bench and Dele Alli suspended.

"It is difficult to explain but it's a bad day and I'm disappointed with our performance. We did not play well. That is why we lost the game," said Pochettino.

Holders Sevilla drew 0-0 away to Basel in Switzerland and ended the game with 10 men following the late sending-off of midfielder Steven N'Zonzi.

In an all-Spanish tie, Athletic Bilbao edged Gary Neville's Valencia 1-0 on a sodden San Mames pitch with Raul Garcia scoring the only goal of the game.

Villarreal are the best placed of all Spain's representatives, though, after a 2-0 win at home to Bayer Leverkusen at El Madrigal secured thanks to a goal in each half by Cedric Bakambu.

Leverkusen, who had Tin Jedvaj sent off late on, now have it all to do in the second leg in Germany.

Shakhtar Donetsk, UEFA Cup winners in 2009, are in a strong position after beating Anderlecht 3-1 in Ukraine.

Lazio came from behind to draw 1-1 with Sparta Prague in the Czech Republic as a Martin Frydek opener was cancelled out by Marco Parolo.