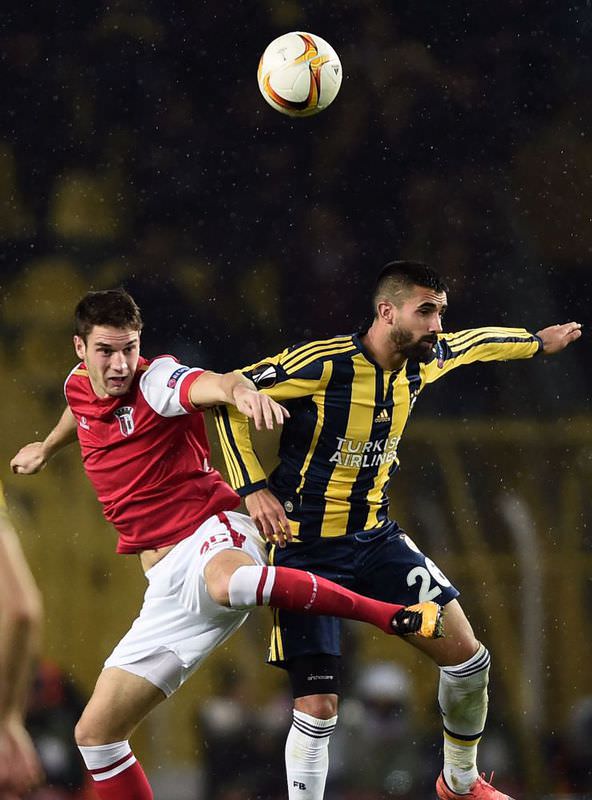 Braga's Baiano (L) vies for the ball with Fenerbahu00e7e's Alper Potuk (R) during the UEFA Europa League round of 16 football match between Fenerbahce and Braga on March 10 at u00dclker u015eu00fckru00fc Sarau00e7oglu stadium in Istanbul.
by Daily Sabah Mar 17, 2016 12:00 am

Turkish football fans have been waiting for a second UEFA title ever since Galatasaray won the country's only continental prize back in 2000. It is still the only European trophy won by a Turkish football team but today Fenerbahçe will be hopeful of reaching the quarter-finals when they take the field against Portuguese rivals Braga in the Estadio Municipal de Braga. The Portuguese side are a goal down as they go into the home leg of their UEFA Europa League round of 16 tie against Fenerbahçe - a significant margin given their guests' fine away record. Mehmet Topal's late goal secured a 1-0 win for Fenerbahçe in the sides' first UEFA meeting. It was Braga's first defeat in four trips to Turkey. Braga's record in seven UEFA games against Turkish clubs is W4 D0 L3 (W1 D0 L2 at home - W3 D0 L1 in Turkey). They have lost their two most recent home meetings with Turkish sides.Fenerbahçe's record in nine matches against Portuguese teams is W5 D0 L4 (W4 D0 L1 at home - W1 D0 L3 in Portugal). They have lost both of their two games in Portugal this century by 3-1 margins.

Here are some interesting facts about the match:

- Fenerbahçe went all the way to the semi-finals when they last contested the round of 16 in 2012/13. That was their best ever campaign in this competition.

- The journey from Istanbul to Braga is around 3,100km, making Fenerbahçe's the longest trip of matchday 10 by some distance.

- Braga boss Paulo Fonseca replaced Vítor Pereira as Porto coach in the summer of 2013. He coached Fenerbahçe's Fabiano and Ba during his time in the Porto dug-out, from 2013-14.

- Fenerbahçe coach Pereira led Porto from 2011-13, with Fenerbahçe's Andre Pinto one of his players at the Estadio do Dragao.

Fenerbahçe boss since June, Portuguese technician Pereira was Andre Villas-Boas's assistant when Porto claimed the 2010/11 UEFA Europa League. The 47-year-old later landed two league titles as the Dragons' coach and a domestic double in Greece with Olympiacos FC in 2014/15. He hails from Espinho, which is about an hour's drive south of Braga.