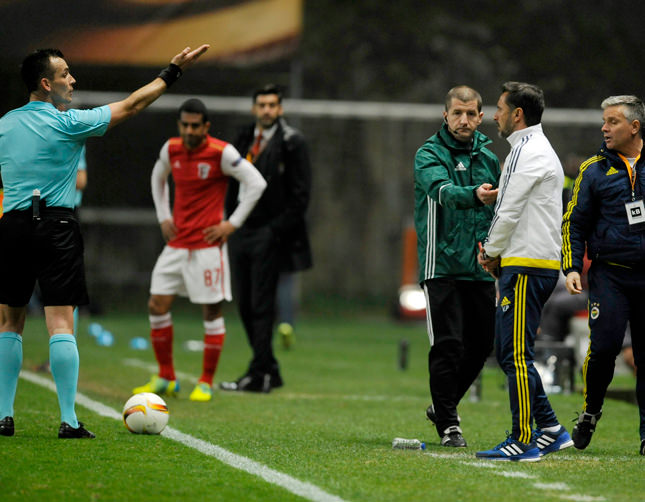 Turkish supporters and fans from all around the world took to social media to call on UEFA to analyze the controversial match between Fenerbahçe and Braga and Croatian referee Ivan Bebek's decisions. Even the Croatian press has criticized the referee.

Fenerbahçe's dreams of a Europa League title were reduced to rubble, as the Turkish powerhouse ended Thursday's game with Braga with eight men as they gave up a 1-0 first-leg advantage in a 4-1 defeat to Braga, which ended the Turkish side's involvement with goals from Ahmed Hassan, a Josue penalty and further efforts from Nikola Stojiljkovic and Rafa Silva. However, Turkish sports fans, media and the public have not been talking about the match or football but instead have been talking about one person: Croatian referee Ivan Bebek. The match saw harsh penalty decisions: eight yellow and three red cards against the Turkish team. The referee's dubious decisions started with a yellow card he showed to Fenerbahçe midfielder Mehmet Topal in the ninth minute when he was clearly fouled by Braga's Nikola Vukcevic, but the referee decided that it was in fact simulated by Topal.

Bebek drew more criticism in the 11th minute when a questionable goal from Egyptian striker Ahmed Hassan upped the heat of the match, as Fenerbahçe claimed the goal was offside. The controversial clash only worsened when in the 44th minute Bebek sent the head coach of Fener, Vitor Pereira, to the stands just prior to half time for continuously arguing with the referee. However, critics agree that Pereira's hotheaded approach did not help the rest of the match.

In the 66th minute, another dreadful decision by Bebek angered Turkish supporters everywhere, as he called for a penalty after Braga player Josue Pesqueira powered a shot straight into Turkish midfielder Mehmet Topal, who had his hands close to his chest in a perfectly natural position. Bebek deemed that it was indeed an intentional handball and awarded a penalty-kick to Braga and brandished a second yellow card at Topal. After a long delay following the questionable refereeing decision, Josue netted the 66th-minute penalty, giving Braga a 2-1 lead against 10-man Fenerbahçe.

After the penalty, it all went downhill for Fenerbahçe, as Braga players Nikola Stojiljkovic and Brook Silva scored two goals, making the score 4-1 and placing their team in the quarterfinals with a 4-2 aggregate win.

Many football lovers and critics said the game was "rigged" and urged UEFA to do something about the referee. Turkey's media has already labeled the referee "Ivan, the Terrible," referring to the grand prince of Moscow who ruled from 1533 to 1547 and was the "Tsar of All the Russias" from 1547 until his death in 1584 and is also remembered for his paranoia and harsh treatment.

The Fenerbahçe administration made an announcement after the match saying: "All our footballers should hold their heads high. Everybody saw what the referee did on the pitch. Our team deserved to qualify."

The Fenerbahçe administrators have also agreed that the Turkish Football Federation must immediately take action so that the possible controversial acts will not affect the Turkish national football team. The Fener administrators reminded UEFA that they also did not do anything about Shakhtar Donetsk's player Fred, who failed a doping test. UEFA announced that Shakhtar Donetsk were free to pick midfielder Fred for a Champions League qualification match against Fenerbahçe, despite him failing a doping test. Fenerbahçe administrators have accused Portuguese spectators of racism, stressing that they shouted "Turks out."  Fenerbahçe head coach Pereira said: "We lost the match because of the referee's bad decisions. The game was balanced. And we scored. The first goal we conceded was offside, and the penalty decision and red card shown to Mehmet Topal was wrong. The game got harder after these bad decisions. The level of the referee was not good enough to supervise such a high-level game."

"Braga saw a 'very good' referee for themselves. We did not have the same chance. We were not eliminated in a fair way. Tomorrow there will be funny things in Portugal. The people will talk about how well Braga played. I know how things work here. I wish Braga good luck with good referees in the next rounds."

Even the Croat press has criticized Bebek. They agreed that the penalty and red card decisions were harsh. After the match, the Fener players were left frustrated. They were calmed down by administrators to prevent further reactions. They promised they would get the Super League and Ziraat Cup title instead.

The fact that UEFA did not make a comment on its website about Bebek also frustrated Turkish fans. Fenerbahçe have become the first team to be shown three red cards in an UEFA Europa league match.  Fenerbahçe's goalie Volkan Demirel said: "There was an unnecessary referee on the team. We lost the match just because of the referee. Fenerbahçe will not be beaten down with one match."

Braga's head coach Paulo Fonseca said: "We might not see such things out of excitement during the game. I don't know what happened between the Fener players and the referee."

The referee's decisions became a trending topic. There were social media reactions galore after the match. Here are some reactions: "What's happening in Braga? Crazy game and a horrible referee," "Should this referee be allowed to referee again? Fener fans I feel really bad for you," "After I saw this referee, I realized that we were unfair to Turkish referees"..."Wow, wow, wow. ...This is pure match fixing by UEFA. Ivan Bebek is the worst referee ever."