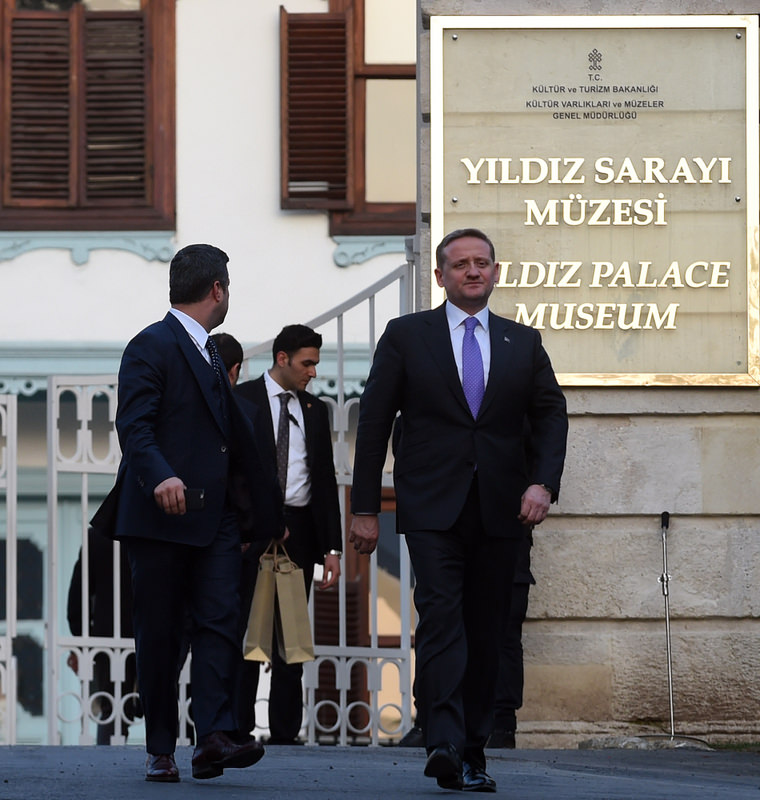 President Recep Tayyip Erdoğan on Monday received members of the Turkish Football Clubs' Union (FCU). After the meeting in Istanbul, FCU President Göksel Gümüşdağ said that the recent terror incidents were the main agenda items in the meeting. A derby match between Galatasaray and Fenerbahçe, which was scheduled to be played on March 20 at 8 p.m., was postponed by the Interior Ministry due to security concerns. Gümüşdağ announced that every team will take the field with placards reading "No to terror" ahead of the games to be played this weekend. He said, "We have already said that all of us are joining hands against terror. We wanted to say it in the presence of our president. We also have expressed our solidarity with the president.

"We are in a time when everybody must show their unity against terrorism. We are supporting our security forces and have decided to take the field with the placard reading 'No to terror.'

"The postponement of the derby between Fenerbahçe and Galatasaray was right. I think it might have resulted in something very bad if it had been played."

Gümüşdağ also stressed that the agreement they presented was signed by the 18 Super League clubs' representatives. "We presented the draft of the new Super League format. Our president said that he would evaluate the draft with both Prime Minister Ahmet Davutoğlu and Sports Minister Akif Çağatay Kılıç as soon as possible."

The FCU representatives met on Monday to negotiate the new process over the Super League, which will see reform on broadcast rights and a host of administrative measures. Göksel Gümüşdağ announced that all 18 clubs have signed up for the possible Super League Inc. "All our clubs agree that a Super League Inc must be put into effect as soon as possible. The new model on which we have been working for nearly 18 months is not only about broadcasting rights or getting more income. This is not true. Naturally the broadcasting rights are part of our new model. But our plan is not made up just for broadcasting rights. We are attaching more importance to the effective management of our clubs as well as financial discipline. The clubs need more income but at the same time they need to be more tightly controlled. The mismanagement of resources can cause huge losses for clubs and the football economy. So there needs to be a fairer, more honest and transparent system in order to prevent mismanagement. After enacting a new law, the name of the new system will be Super League Inc to supervise this mission."