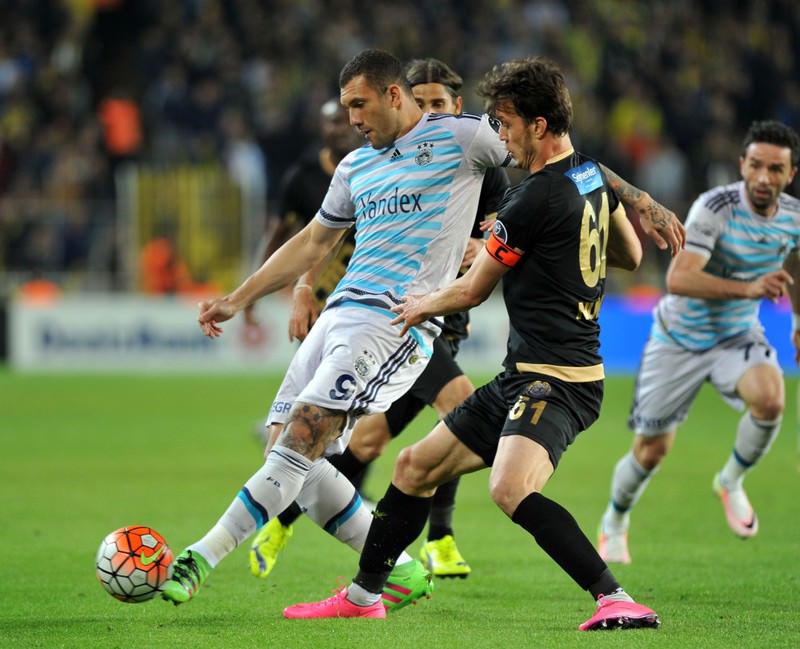 Fenerbahçe's Super League dreams were overshadowed by a goalless draw against Osmanlıspor on Sunday, which may help a further point gap with leaders Beşiktaş

A lackluster performance and strong defense from their rivals spelled trouble for Fenerbahçe on Sunday, who missed an opportunity to boost their bid for the Super League title with Beşiktaş.

Osmanlıspor from the capital Ankara dealt a blow to the Yellow Canaries, who failed to exploit the advantage of a home game in the presence of about 28,000 fans in Istanbul.

Fenerbahçe's Portuguese coach Vitor Pereira was the target of the Turkish sports media's ire for the Canaries' failure to beat the Ottomans, which lag 20 points behind Fener. the Ottomans basked in the draw with their coach Mustafa Reşit Akçay praising his team's defense against an "impressive" Fenerbahçe.

Fener, missing critical players like Nani and Caner, took to the pitch with a style variating between "coward" tactics, according to the local media, and the "creativity of players," as Akçay testified to. The Canaries' midfield triumvirate of Alper, Mehmet Topal and Ozan barely had a chance to reach the goal and they were blamed for missing opportunities on goal. Pereira turned to countryman Diego in the second half but the midfielder exhibited a lackluster performance.Dutch forward Robin Van Persie's horrible miss in the 61st minute crowned the failure. One minute later, Pereira resorted to Portuguese import Nani. Nani shone on the pitch but failed to bring the much-needed momentum after a while and Fener failed to penetrate the tight defense of the Ottomans. Fener had plenty of opportunities to score and took 19 shots on goal but only two managed to come close to the goalkeeper.

The goalless draw put an end to Fenerbahçe's winning streak of 13 matches. The Canaries are now counting on Beşiktaş, who dominates the Super League with 63 points, to stumble in subsequent matches. Beşiktaş were scheduled to play against Kasımpaşa as the news went to print in a match where a win would further secure the Eagles' lead with a gap of six points over Fenerbahçe.

Pereira was not repentant over the draw, which fueled the rage of fans. In a post-match press conference, the coach said the league was not over and he expected Beşiktaş to lose points as well. "Beşiktaş and Fenerbahçe are not very different and you can't be the winner of this league with a 10-point gap over the second team," he said through a translator. Pereira said it was a tough game and praised Osmanlıspor. "We had a lack of quality in terms of an offensive gameplay," he said, reminding Fener did not give a chance for a counter attack from Osmanlıspor. "We lost two points and in this period of the league, a loss can hurt people emotionally. But we need to stay calm and focus on the next matches," he said. Staving off questions about if he was at fault for the draw, Pereira said no one should be blamed and the draw obviously did not mean that Osmanlıspor were a bad team. "Galatasaray were last year's champions and they transferred new players but we don't know how much they scored this season," he said. Galatasaray have dropped to seventh place with only 39 points this season. "It is a tough league we are competing in," Pereira said, while pointing out that Fener were the only Turkish team to enjoy a winning streak in European tournaments.

"Beşiktaş is a good team and now you are seeing two good teams competing for the top spot. I believe we will be champions anyway this season," he said.

Mustafa Reşit Akçay said at a post-match press conference that his team was vigilant against Fener's "creative" players and careful against Robin Van Persie. "We survived and I congratulate my players," Akçay said while lauding Fener's "good analysis" of the Ottomans.
RELATED TOPICS