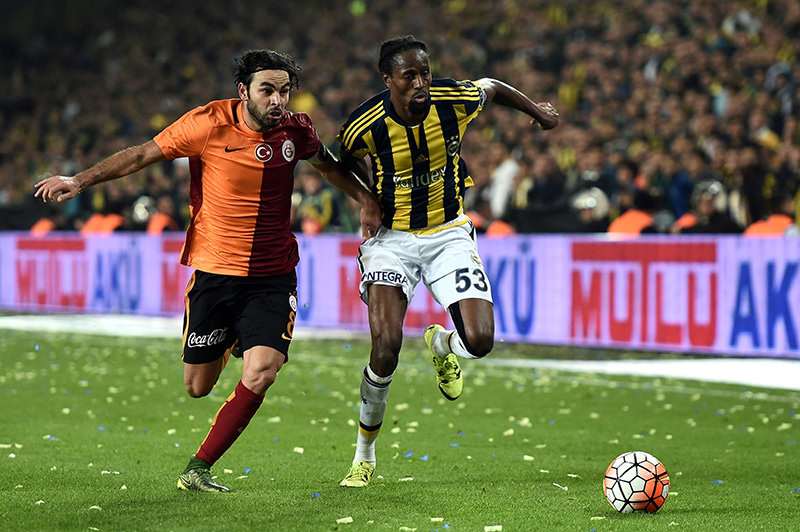 The derby between Turkey's top football clubs Galatasaray and Fenerbahçe ended in a 0-0 draw at the Türk Telekom Arena in Istanbul Sunday, giving Beşiktaş the chance to lead the table with five points.

After 28 matches, Beşiktaş lead the Turkish Super Lig with 66 points, Fenerbahçe came second with 61 points, while Galatasaray came in at number six with 41 points.

The match has a long tradition of keeping almost the entire nation locked in front of television screens for 90 minutes to watch the "Intercontinental Derby" between the two largest Istanbul clubs, Galatasaray from the European side and Fenerbahçe from the Asian.

The starting eleven of the two teams were:

For the home side Galatasaray, which currently stand in seventh place in Turkey's top division Süper Lig at 26 points right behind leaders Beşiktaş, getting a victory against their arch-rival has symbolic importance in a nightmare season.

Galatasaray recently received a one-year ban from European cups by the UEFA for failing to comply with its Financial Fair Play rules, while appointing their third manager in just one season, youth coach Jan Olde Riekerink, who is set to run the team until the end of the 2015-2016 season on March 16.

Meanwhile, Fenerbahçe are six points behind leader's Beşiktaş with one match missing.

Istanbul's famous Istiklal Street was hit by a Daesh terror organization linked suicide bomber on March 20, killing four civilians and injuring 36 others. The bombing grinded social life to a halt in Istanbul over the weekend, while the basketball match between Galatasaray Odeabank and Darüşşafaka Doğuş was cancelled as Doğuş was at camp in a hotel near the explosion scene in Taksim district.

Previously on March 13, the Turkish capital Ankara was also struck by a car bombing carried out by the PKK terror organization, which killed 35 civilians. Galatasaray's Turkish striker Umut Bulut's father Kemal Bulut was among the victims of the attack.