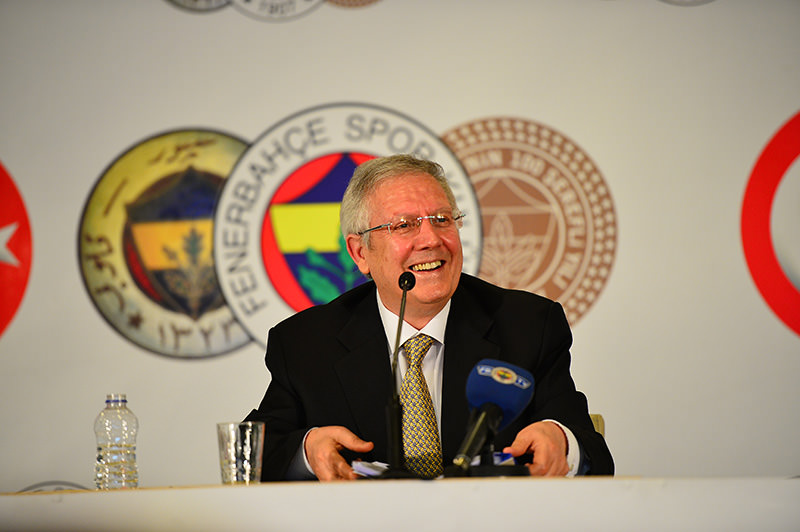 Yıldırım's comments came on Monday following their 4-1 home win against Mersin İdmanyurdu, in which some fans chanted the name of Ersun Yanal, the renowned Turkish manager who coached Fenerbahçe in the 2013-2014 Season. Failing to win eight points with two losses and a draw in the last three weeks, Fenerbahçe is currently five points behind the leaders Beşiktaş as only five matches remain until the end of the season.

Claiming that some fan groups are looking after their own profit, Yıldırım said that he will struggle with these groups until the end. "Yesterday they shouted 'Ersun Yanal'. I have not seen or talked with Ersun Yanal since he left. As long as I'm here, Ersun Yanal cannot come to this club. If these stands behave like this, if they make me angry, I will not leave for another 10 years. They shouldn't mess with me anymore," Yıldırım said. He also accused Yanal of 'being immoral' and negotiating with their arch rivals Galatasaray and Trabzonspor.

Portuguese manager Vitor Pereira has been coaching Fenerbahçe since the beginning of the 2015-2016 Season, who replaced Turkish coach İsmail Kartal who served in the 2014-2015 Sseason.

Yıldırım claimed that the championship race will continue until the very last week.

Elected in 1998 with only one vote ahead of his opponent, Yıldırım resigned twice during his term, later coming back citing pressure from the Fenerbahçe community. He was praised by the Turkish sports community for his contributions to the club's financial status and infrastructure, and Fenerbahçe gained significant success in all sports branches.

However, results in football were relatively poor as Fenerbahçe only managed to claim the championship title six times in the Yıldırım era. His management style and bitter statements also received heavy criticism from both the Fenerbahçe community and other clubs, while often engaging in bitter breakups with players and coaches who were influential in the club's history. During his term, Yıldırım engaged in a bitter strife with a fan group named "Genç Fenerbahçeliler" (Young Fenerbahçe Fans).

In 2011, along with other clubs and prominent figures of Turkish football, Fenerbahçe went through a match-fixing probe that led to the club's suspension from UEFA competitions for a year and its administrators were convicted. The investigations were initiated by prosecutors with alleged ties to the controversial Gülen Movement, which is being probed as Gülenist Terror Organization / Parallel State Structure (FETÖ/PDY) for aiming to topple the government through investigations initiated with fake evidences and illegal wiretappings.