Fenerbahçe and Galatasaray close to meeting in Ziraat Cup final 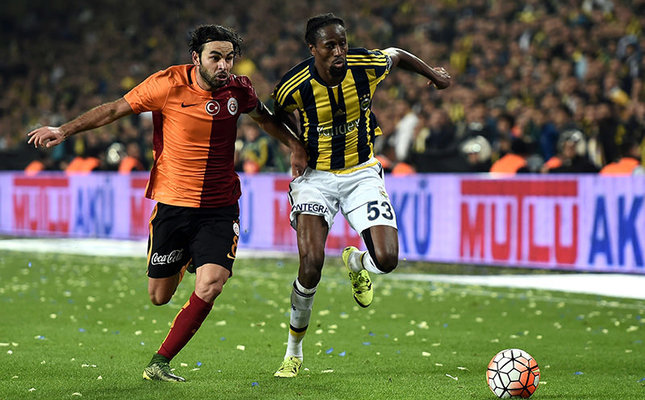 The Turkish powerhouses, who have been enduring difficult times in the Spor Toto Super League, have found consolation in the Ziraat Cup after cruising past rivals and gaining an advantage in their march to the final

Despite being five points behind archrivals Beşiktaş in the title race, Fenerbahçe were able to enjoy a stress-free evening as they cruised past Konyaspor 3-0 in an away match at the Konya Torku Arena Stadium on Wednesday. Thanks to goals from Volkan Şen in the 38th minute, Luis Nani in the 45th minute and Robin van Persie in the 90th minute, Fenerbahçe gained an almost unassailable advantage ahead of the semi-final second leg match to be played on May 5 in Istanbul. Enjoying a strong season under the management of head coach Aykut Kocaman, Konyaspor were defeated for the first time in 2016. Fenerbahçe were able to enjoy some respite from their league duties after a run of bad results in the Spor Toto Super League.Galatasaray, who are having one of the worst seasons in their history, have also found relief in their Ziraat Cup challenge. The Lions beat their Black Sea rivals Çaykur Rizespor 3-1 in an away match played in Rize on Wednesday. Like Fenerbahçe they will enjoy a large advantage ahead of their second leg match. Galatasaray's goals were scored by Emre Çolak in the 15th minute, Yasin Öztekin in the 61st minute and Lukas Podolski in injury time. Ahmet İlhan found the net in the 76th minute for Çaykur Rizespor.

Victory in the Ziraat Cup has taken on renewed importance this season for Galatasaray. It will be difficult for the Yellow-Reds to gain the right to participate in European tournaments in the near future due to European football's governing body UEFA having imposed a one-year ban on Galatasaray for not complying with financial fair play terms. The UEFA Club Financial Control Body (CFCB) adjudicatory chamber made the ruling on the Turkish club. So the Galatasaray administration is aiming to serve the ban this year by gaining the right to participate in the UEFA Europa League. UEFA said Galatasaray will be excluded from the Champions League and Europa League if it qualifies either this season or next. Galatasaray is now eighth in the Super League and sit outside the qualifying places for next season's Champions League and Europa League. A fourth-place finish will ensure Galatasaray serves the ban from the next Europa League.

This season, Galatasaray was third in a Champions League group behind Atletico Madrid and Benfica, and was then eliminated in the Europa League by Lazio. This season has already proven to be a nightmare for Galatasaray, who currently stand in eighth place in the Super League with 18 points behind the leaders, and their arch-rivals, Beşiktaş. The Ziraat Cup is a football cup competition run by the Turkish Football Federation since 1962. During a brief sponsorship period with Fortis, its sponsored name was Fortis Turkish Cup. Now Ziraat Bank is the sponsor and the sponsored name for the cup is the Ziraat Turkish Cup. The cup was created in 1962 and has taken place every year since then. Many different formats, including a pure knockout competition and group stages, have been tried and finally for the 2012-13 season, an expanded tournament format has been adopted. A record 156 teams compete in the tournament. The final consists of a single match that takes place in a neutral setting. The winner of the cup earns a spot in the play-off round of the UEFA Europa League, and also plays in the Turkish Super Cup against the Super League champions. If the winner of the cup has already secured a spot in a European competition because of their league finish, the runners-up are sent to compete.
Last Update: Apr 22, 2016 1:40 am
RELATED TOPICS