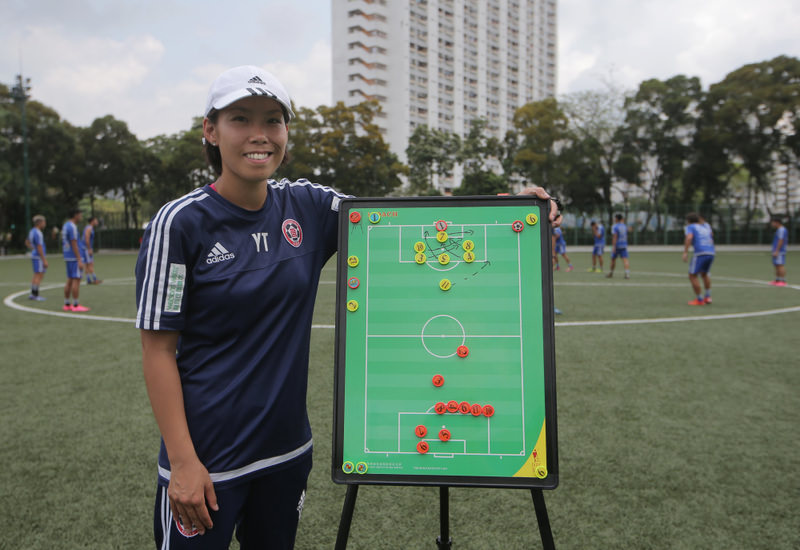 by Associated Press May 07, 2016 12:00 am
At age 27, Chan Yueng-ting is younger than several of the players she coaches at Eastern Sports Club yet she has already secured a unique place for herself in soccer history by becoming the first woman to lead a men's team to a top-division national championship. Chan took charge at Eastern in December, with the club not having won the Hong Kong league for 21 years, and last month the team clinched that elusive title and made their female coach the talk of the town. "I'm really lucky," Chan said to SNTV. "Now I make history and then no one think that will happen in Hong Kong. I have to say thanks to the club that they trust me, give me support and also player encourage me a lot this season."

Chan had impediments in her path: a family that was skeptical of her career choice, conservative views about women's involvement in men's sports, and her own anxieties about whether she could command authority with players who were often verbally— and occasionally physically aggressive. "When I was like, maybe, 13 years old, and I wanted to play football, my family didn't allow it, because in Chinese culture, girls or woman shouldn't play football, you should go to dance or you go to draw something, something like this," Chan said. A couple of years after that knockback by her family, Chan forged her mother's signature on a form to apply for a summer training program, and joined her local club at Sha Tin.

Though her path into the sport, and her subsequent climb to the top of the game in Hong Kong, was littered with hurdles, her initial inspiration to get involved in soccer was a common one for teenage girls at the time — a love for David Beckham. And her ardor and respect for the former Manchester United and England great has not dimmed. "Why I play football is because I love David Beckham," Chan said. "Yeah, every time I want to quiz something, I watch Beckham's match video and just try to get some message or positive energy, messages from him." Eastern's title win gives it a shot at next year's Asian Champions League, and club bosses have promised to invest in the squad to pursue further success in 2017, but Chan has ambitions beyond Hong Kong. "I want to go to another country, maybe just as an assistant coach to get more knowledge," Chan said. "Hong Kong football level is not very high compared with like Japan, Korea or even we go other country U.K., U.S., so if I have chance I want to go out. And I want to learn something and then bring something to Hong Kong football."
RELATED TOPICS