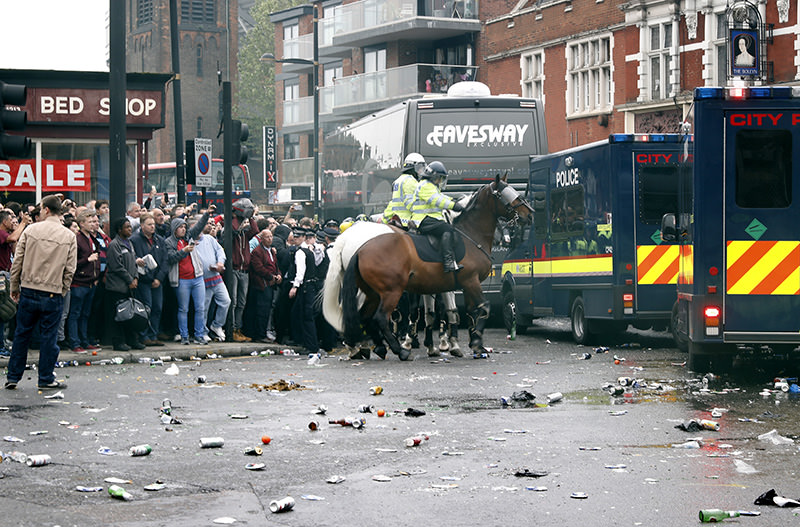 General view as bottles are thrown at the Manchester United team bus before the match (Reuters Photo)
by Associated Press May 10, 2016 12:00 am

Manchester United's team bus was attacked on its way into Upton Park as the Premier League squad arrived for Tuesday's match against West Ham, injuring a police officer and another person.

Objects were thrown at the bus as United arrived at West Ham's last ever game at the Boleyn Ground, ahead of its move to the Olympic Stadium next season. Video footage showed damage to sections of the tinted external windows, while the clear internal windows appeared intact.

"We are aware that a number of items were thrown towards Man Utd's coach this evening," police said in a statement. "One officer and a member of the public were injured."

United captain Wayne Rooney told Sky Sports that the bus was "smashed up."

Rooney added: "We know it's a big game for West Ham, a big night for them - leaving the stadium - but I'm sure West Ham as a club will be disappointed with what the fans have done."

Large crowds had gathered outside the stadium and the trouble started as the driver maneuvered the bus through the car park gates.

United manager Louis van Gaal said: "The images shall tell everything. The police was also taping. It's a lot of emotion for the people, but for us it's the second time in London that we have to start later."

The experienced Dutchman said it was not the first time he had seen a team bus being attacked.

"It's not so nice, but it's part of the job I have to say" said Van Gaal, whose team needed a victory in Tuesday's match to have a realistic chance of qualifying for the Champions League next season.

Aware of the possible impact of the trouble on his team before such a key game, he added: "The way we have been received is not the proper way, of course. That makes all the influence on the players and that is a pity."

However, West Ham co-owner David Sullivan said that United was to blame for not arriving earlier for such a high-profile game.

"I'm gravely disappointed, more for our supporters. What people forget is they've got trains and buses to get home and we've got a wonderful, wonderful show after the game for them. Many just can't stay any more.

"Man United should have got here at 4pm. They know it's our last game. They had the same problem at Tottenham a few weeks ago."

About 15 minutes before the delayed kickoff, hundreds of West Ham fans were still outside the stadium, having mostly congregated around a 1966 World Cup sculpture featuring West Ham and England stars Bobby Moore, Geoff Hurst and Martin Peters.

Around 100 police in riot gear stood around in formation and watched, with at least half a dozen officers on horseback. The street was littered with smashed bottles.