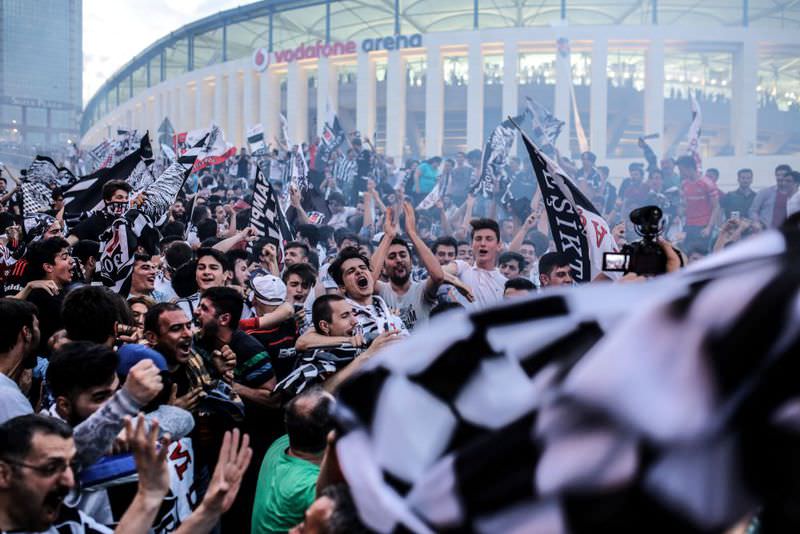 Beu015fiktau015f supporters celebrate after their team won the Turkish Super Toto league title.
by Daily Sabah with Wires May 17, 2016 12:00 am

Beşiktaş clinched the 2015-2016 Super League title, ending more than half a decade without a title, sparking wild celebrations in Istanbul and Turkey

Beşiktaş clinched the Turkish Super League title with a game to spare on Sunday, topping the league for the first time since 2009 and claiming Turkey's sole automatic Champions League spot. Driven on by over 40,000 fans inside their new stadium Vodafone Arena on the Bosporus, Beşiktaş thrashed Osmanlıspor 3-1 to gain an unassailable advantage over local Istanbul rivals Fenerbahçe going into the coming week's final round of games. The end to the over half-decade title drought sparked delirious celebrations in Istanbul, with thousands fans of the Black Eagles lighting flares outside the stadium and setting off firecrackers. All over Istanbul, fans drove through the city carrying black-and-white Beşiktaş flags with horns blaring in a deafening cacophony. Brazilian center-back Marcelo Guedes put the hosts two goals ahead with strikes in rapid succession with just over 20 minutes on the clock.

German international striker Mario Gomez, the standout player for Beşiktaş this season and one of the most successful foreign imports into Turkish football in recent years, added a third just after half-time.

Striker Pierre Webo of Cameroon pulled one back for the visitors in the 74th minute, but by then, the celebrations were already beginning.

Playing at their home stadium on the Asian side of the Bosporus, Fenerbahçe defeated Gençlerbirliği of Ankara 2-1 but are six points behind Beşiktaş with only three left up for grabs.

"There was a great atmosphere and I went through all kinds of emotion. For me this season has been like a dream," Gomez, who has resurrected his career after arriving on loan from Fiorentina, said after the game.

Beşiktaş coach Şenol Güneş said it was now the turn of Beşiktaş to shine after years of domination by Istanbul rivals Fenerbahçe and Galatasaray.

"Fenerbahçe are a good team, a strong team, but we are better. Everyone is looking at Beşiktaş with respect," he said.

Beşiktaş were the most consistent team under Güneş, who guided Turkey to third place in the 2002 World Cup, but face a challenge to attract more international stars, or even hold on to the league's top scorer Gomez who has the right to return to Fiorentina. Gomez declined to be drawn on his future but indicated that he could yet stay.

"I am here now and I know very well what the conditions are at Beşiktaş. We have the Champions League in front of us. I feel good things."

Güneş said it was in the interests of the 30-year-old to stay put in Turkey.

"If Mario stays I think it is good for his career. Mario helped us but we also helped Mario. He won't lose anything by staying, by going he could lose."

Despite signing Robin Van Persie and Nani from Manchester United in the close season, Fenerbahçe were left disappointed and coach Vitor Pereira looks likely to be shown the door at the season's end.

This campaign has been an unmitigated disaster for last season's champions Galatasaray, on their third manager this season and languishing just above mid-table despite the presence of stars like Wesley Sneijder and Lukas Podolski. To add insult to injury, the Istanbul side have been banned by UEFA from Europe for two seasons for overspending.

Turkey will fancy themselves as dark horses going into Euro 2016, with talisman Arda Turan hoping to put behind him a disappointing season on the sidelines at Barcelona and striker Cenk Tosun of Beşiktaş and goalkeeper Volkan Babacan Başakşehir emerging as new stars of the national side.