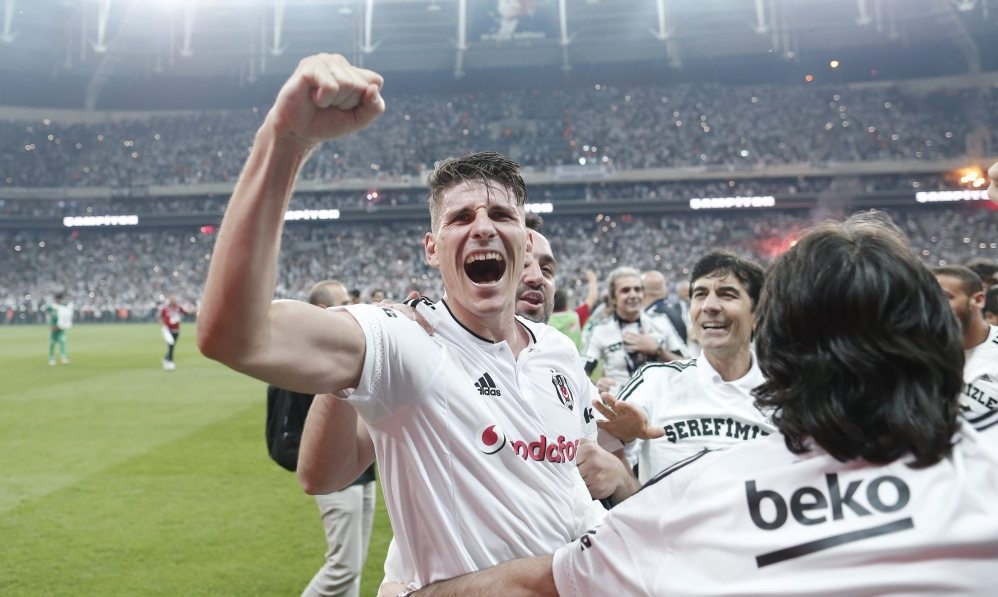 Mario Gomez celebrates with team members after winning the Super League Championship.
by Daily Sabah May 19, 2016 12:00 am
The Black Eagles, who claimed their first Turkish league title for seven years and their 14th ever, will be given the cup today in a ceremony in their new Vodafone Arena. According to the club's website, the players and technical staff will cross the Bosporus in a boat and go to Beşiktaş, on the European side. Boat-owning fans will also accompany the team at 4 p.m. After they are ashore, the team will get on an open-top bus and make their way to the Vodafone Arena. At 7 p.m., the celebrations will begin at the stadium with the fans in the stands. Singers Gökhan Tepe, Feridun Düzağaç, Emre Kaya, Simge, Ali Altay, the wife of footballer Dusko Tosic, Jelena Tosic and Birol Can will perform in a concert. There will also be a digital audio/visual show at the stadium. The event will end with footballers touring the stadium with the cup in their hands. Beşiktaş, who last won the domestic title in 2009, will now qualify directly for the Champions League while Fenerbahçe go into the qualifying rounds.

Gomez, this season's top Super League scorer, spearheaded Beşiktaş's campaign with 26 goals. It was the first ever league title for Beşiktaş coach Şenol Güneş, who led the Turkish national team to third place in the 2002 World Cup.

The victory followed on the heels of last month's opening of Beşiktaş's new 42,000-seater stadium, the Vodafone Arena - built in the same location by the shore of the Bosporus as its old home ground, where it played until three years ago.
RELATED TOPICS