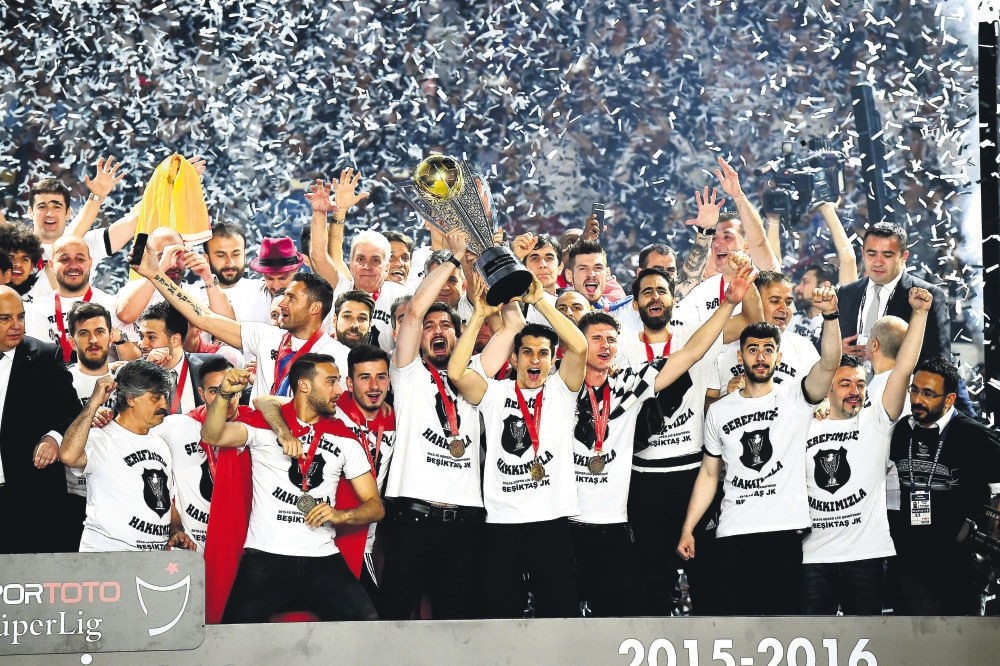 With Beşiktaş lifting their championship trophy amid wild celebrations, Turkish football fans now turn to the pre-Euro 2016 friendly match against England on Sunday

After a 34-week long competition, the Super League has ended with matches played on Thursday. Due to the friendly match between Turkey and England on Sunday, the last week's matches were played on Thursday. Champions Beşiktaş had already won the Super League title with a game to spare on May 15, topping the league for the first time since 2009 and claiming Turkey's sole automatic Champions League spot. Having enjoyed a great year, the Black Eagles have also become the top-scoring team with 75 goals. They finished the season with 79 points in 34 weeks. They won 25 games with four draws and five defeats. Beşiktaş's German star Mario Gomez won the top scorer award with 26 goals. Gomez has become the first foreign top scorer at Beşiktaş. He is followed by Samuel Eto'o of Antalyaspor with 20 goals and Hugo Rodallega of Akhisar Belediyespor with 19 goals.

Disappointing their fans, Fenerbahçe finished the season as runner-up behind Beşiktaş. Despite signing Robin Van Persie and Nani signing from Manchester United in the close season, Fenerbahçe were left disappointed and coach Vitor Pereira's future in his position is up for debate. Another disappointing powerhouse Galatasaray came sixth with only 51 points. This campaign has been an unmitigated disaster for last season's champions Galatasaray, on their third manager this season and languishing in mid-table despite the presence of stars like Wesley Sneijder and Lukas Podolski. To add insult to injury, the Istanbul side have been banned by UEFA from Europe for two seasons for overspending. They have only one chance to go to Europe: to beat their archrivals Fenerbahçe in the Ziraat Turkish Cup final. If Galatasaray can win the Ziraat Turkish Cup, they will be able to qualify for European tournaments next year. However, since they were banned by UEFA for two years due to their financial irregularities, they will serve their ban and cannot qualify for the Europe next year anyway. The other title-holders Bursaspor and Trabzonspor made their fans long for the glorious past. Bursaspor, who are ranked 11th with 44 points, are followed by Trabzonspor with only 40 points. Trabzonspor conceded 13 goals in two weeks, inflicting on their fans an unprecedented torture for a historically successful club. And the worst nightmare belonged to the fans of Mersin İdmanyurdu, Eskişehirspor and Sivasspor, who were relegated.

Beşiktaş lifted their championship trophy on Thursday amid wild celebrations. The end to the over half-decade title drought sparked delirious celebrations in Istanbul, with thousands fans of the Black Eagles fans lighting flares and setting off firecrackers. All over Istanbul, fans drove through the city carrying black-and-white Beşiktaş flags with horns blaring in a deafening cacophony.
RELATED TOPICS